A Sketch: Assurance and Insurance
by Barbara Carey 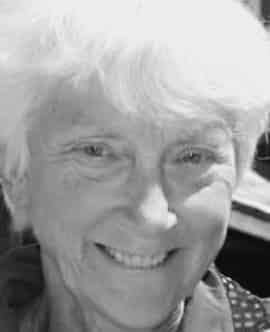 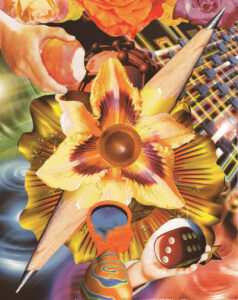 Nan@39, autobiographical collage by Nan Sanders Pokerwinski
I felt the chilling wind whip around me on this cold and rainy November day. Normally I might not have ventured out in such nasty weather. But today was different. Very different.

Three weeks before I had said good-bye to my husband as he left on a once-in-a-lifetime adventure. He was going to ride motorcycles through the mountainous roads of northern Colombia with two of his sons. I wasn’t concerned for his safety – he had experience riding a motorcycle and he was very excited to share this special time with his sons.

Less than a week into their trip I received a jarring phone call. My husband had had a severe accident on his rented motorcycle. He had been taken to a very small hospital in a village in the Andes mountains. They knew he had a badly broken leg and that his neck hurt, but they did not know the full extent of his injuries. The hospital had limited technology and not even dependable phone lines or internet service. The satellite phone we had purchased for the trip proved to be highly dependable; using it we were able to arrange a medical jet to come from Florida to transfer him home.

After a seventeen-hour flight strapped to a gurney, my husband arrived at our local hospital. An MRI of his neck showed that the injury was extremely dangerous and the surgery too delicate for the local doctors to perform. He was immediately transported to a crisis center where a neck specialist would perform the operation on his displaced C2 vertebrae. Although they had prepared me for the possibility that he would likely be a paraplegic or die, he came through the surgery able to move all of his limbs. A few days later he had surgery on the broken leg, and after eleven days in the hospital they were ready to send him to a recovery facility. I was told he would most likely be there for a few weeks, but he should be home for most of the holiday season.

Imagine my dismay when I was told that because we lived in a condo with wide doors and only one floor, they had decided to send my husband home instead and would be releasing him to my care in a few hours. I was distraught. I had nothing prepared at home. Luckily we were given an extra day of hospital care so I could get the equipment I needed.

My son had flown in from Florida, so was available to help with the preparations. Together we rolled up and stored oriental carpets that were potential obstacles. We rented a wheelchair, a walker, and a raised toilet seat. We arranged to have a handyman install bars in the shower stall.

By late afternoon we had accomplished most of our tasks. I was exhausted, having slept only a few hours a night for the last two weeks and having eaten nothing but hospital food. My last errand of the day was to go to the store to fill a long list of prescriptions and to stock up on foods that would nourish my husband. He had lost more than twenty pounds during his ordeal and was very fragile.

As I loaded my purchases into the car in the biting wind and pelting rain I felt exhausted and distracted. Instead of backing out of the parking spot, as I should have, I pulled forward through the empty slot in front of me, looking to the right, then turning left. My vision to the left was blocked by the adjacent parked car, so I did not see the car backing up in the one-way lane until I pulled forward and hit it.

Out of the expensive car climbed a large, well-dressed, imposing-looking Black man. I had no idea what to expect as he approached me, but I did not have the ability to do anything but apologize and babble on about all I had been through the last two weeks. He towered silently over me and when I slowed down he spread his arms and said, “It sounds like you need a hug.” I felt myself begin to crumble. “Yes, I do,” I said. I stepped forward, and as his strong arms embraced me, began to relax for the first time in days. I felt his warmth as the cold wind buffeted us. As he held me he said in my ear, “Don’t worry about me. I’ve got Geico.”

And with that, he got into his car and drove away. We never exchanged information. I don’t know his name or anything about him – other than the fact that he is a very kind human being who reached out to comfort me when I needed it most

I wrote this piece to convey how much kindness there is in the world despite differences in ethnicity, cultures and economic levels. I believe that our common humanity trumps our differences more often than news and social media would have us believe.

Barbara Carey is a travel/language/life experience junky. Following study in the States and in Germany, she served in the Peace Corps in India. She has a master’s degree in linguistics and a background in ESL, business and social work. She has published articles in local publications and has self-published a book of essays “Passing Thoughts.” She has taken creative writing courses for many years and enjoys writing non-fiction pieces from her personal experiences. Her 18 grandchildren keep her young and inspired. She lives in the Seattle area and winters in Palm Desert, California. You can usually find her on the pickleball court or at her computer.
Next: Alina Bloomgarden, Jazz Visionary »
Home | Archive

4 Comments on “A Sketch: Assurance and Insurance”