Hooked Up
by Elaine Handley 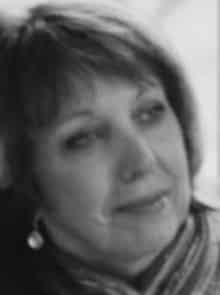 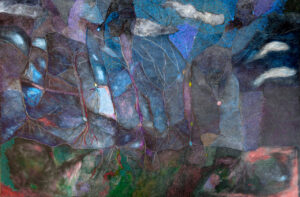 Darkness Within, scratchboard and ink, by Nancy Wolitzer

She woke groggy and confused. Where was she? Light was streaming through the window, but it was an unfamiliar window. The painting on the wall was only vaguely familiar. She realized that she was naked under the sheet that lightly covered her. It was hot, but a fan whirred overhead, making the sheet necessary. Slowly she turned to lie on her back, then turned her head and found herself looking into a pair of brown eyes.

“Good morning,” he said softly. She searched his eyes and began to remember the night before.

“Mmmm. Hi.” She pulled the sheet up under her chin. He had a nice face. And she remembered that she liked his deep laugh.

He propped himself up on one arm. “That was…that was quite a night we had.” He looked at her tentatively.

“Yeah, I guess it was…” She couldn’t meet his eyes. She had not been herself last night. She had never done anything like that before. “Um, what time is it?”

“Oh – I should go.” She started to sit up while wrapping the sheet further around her, but realized if she took too much of it, she would leave him naked. She wasn’t ready for that.

“Where are you planning to go? I thought this was your place.” He too sat up. His chest was hairy. She didn’t remember that. He was looking at her with concern.

“Wha – ? Oh, wait, okay, yes…I remember now. I just moved here.” She looked around the room. On the dresser was her favorite vase next to a book she had started, and next to the chest of drawers was the chair that had belonged to her grandmother. These familiar objects were reassuring. Then she noticed her bra on the floor… and her panties. The red lace ones Ginny gave her as a housewarming present with a bottle of champagne. “Remember, Girl Scouts are always prepared,” the note said. Oh god. On the floor next to the bed was the empty bottle of champagne lying on its side, with two empty wine glasses. The evidence.

“That would explain the boxes,” he said into the silence. She didn’t respond, lost in thought. “Today is my birthday,” he seemed to say to no one in particular.

“Wha – ? Oh! Happy Birthday.” She smiled at him. “How about if I make us some breakfast?” It seemed like the decent thing to do.

“That would be nice. You’d like to get up, wouldn’t you?”

“Well, I need to if I am going to make us breakfast.”

“True enough.“ He put his legs over his side of the bed and reached for his clothes.

She hurried to the closet on her side of the room. Damn, she hadn’t unpacked her robe yet. She glanced behind her, relieved that he was busy with his own clothing. It had been too long since anyone had seen her naked in daylight, and she just couldn’t bear to read on his face what he might think of her so, well, nude. She grabbed a long shirt that was hanging in the closet, picked up her underwear from the floor, and bolted into the bathroom.

What had happened to her? Her head ached dully. Had she lost her mind? She had never once in her life brought a man she didn’t know home for … sex. He did seem like a nice man, and although she’d had a good bit to drink – maybe because of it – the lovemaking had been – well, spectacular. She had felt things she didn’t expect to ever feel again. She had met him at happy hour, something she didn’t usually partake of, but Ginny had urged her, practically ordered her to go, since she was new, and it was a way to meet people.

He had introduced himself and had been so easy to talk to. And he made her laugh. She remembered thinking how foreign her laugh sounded – and realized she hadn’t laughed much in recent years. He made literary allusions that she got, and that seemed to please him. They’d left happy hour and walked around town. Many of the stores were open late and they wandered in and out of them, chatting and exclaiming over things they liked, or thought were funny.

When she returned to the bedroom he was dressed, standing in front of the unfamiliar painting. He had straightened the sheets, so the room looked tidier. That’s right, she had bought the painting the night before, and he had offered to hang it for her. That’s how they got here.

“Still look good in the morning light?” he said turning toward her. For a moment she wasn’t sure if he was referring to himself or the painting. She went and stood next to him to look at the painting.

“Yes, I like the way the sunlight hits the side of the house there and illuminates the grass.” They stood in silence for a moment admiring the painting. “Thanks for hanging it for me.”

He nodded. “No problemo. Can I help with breakfast?”

“Sure.” She walked into the unfamiliar kitchen. There were cartons on the counter with dish towels and utensils spilling out of them. The coffee maker stood at the ready, though, and she started looking in cupboards for coffee. “Sorry things are such a mess,” she said into the cupboards. She found a bag of coffee and started a pot while he watched. “So, today’s your birthday, huh? Mine was last week. Any plans to celebrate?” It made her nervous to be watched.

“No, not really. I thought I’d go for a walk in the park, smoke a cigar, read some poetry – that sort of thing. Be reflective.”

”Mmm… that sounds nice,” she said distractedly, still peering into cupboards, and finally the fridge. She was trying to remember his name. How awful, she told herself, that she couldn’t remember his name after what they had done together.

“Alicia, what is it?” She couldn’t let him know she didn’t remember his name. Especially since he remembered hers.

“Well, the bad news is there is nothing to eat for breakfast. I haven’t been to the market yet. The cupboards are pretty bare, and I don’t even have an egg to fry for you on your birthday.” She gave him a rueful smile and held her arms out beseechingly. “Oh, damn. I don’t even have cream for the coffee – but there is a little sugar.”

“That will have to do,” he said, looking at her as if he were trying to see into her.

They drank the coffee standing at the counter, chatting lightly about what a perfect day it was turning out to be for his birthday, and remarking on the various things they had looked at in the stores the night before. Then they ran out of things to say.

“I’d better get going.” She nodded. At the door he turned to her. “I had a fine time last night.” He looked into her eyes, but she could only bear it for a second before looking away.

“Oh, now don’t forget this,” she said and handed him his cane.

“Right. I won’t get far without it.” He smiled and let out a small sigh.

“By the way, what birthday is it today?”

“I’m eighty-two years young. And what about you, what birthday was it for you last week?”

“Okay then, I’d say we still have it going on!” he said with a laugh. She could feel herself blushing. “I’m glad you’ve moved into Rosewood Gardens. I’ll see you at dinner.”

Elaine Handley has published in a variety of magazines and anthologies. A three-time winner of the Adirondack Center for Writing’s Best Poetry Book Award, her latest chapbook, Securing the Perimeter, was published in 2018 by Clare Songbird Publishing House. She also is a professor at SUNY Empire State College.
Next: A Sketch: Assurance and Insurance »
Home | Archive

5 Comments on “Hooked Up”