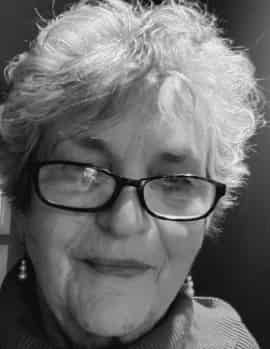 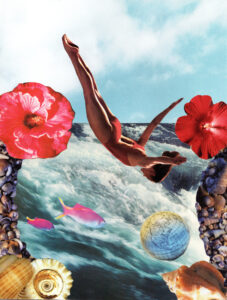 Nan@16, autobiographical collage by Nan Sanders Pokerwinski
Peaches was bald – shining, mahogany-amber bald – when we met at a picnic north of Columbus last summer. Her gold bangles shone in the sunlight and shimmied, just a bit, when she talked – her voice was raucous, rich and strident, so many dares in that voice. Dares she laid down, dares she threw even further out into the afternoon sunshine, dares not caring for a reply. Her lips were full, outlined in burnt red. Chemo had taken her eyelashes, but her dark brown eyes, wide open, said it didn’t matter.

The picnic was a summer outing for cancer folks given by the caregivers from an oncology unit in Columbus, near the Olentangy River, and many of the patients brought a guest. I was Donna’s. By the end of the evening, everyone knew something new about chemo, reactions, remedies to the reactions, and the people sitting beside them. Donna was not cooking much those summer nights, so I took a dish to share: a multi-layered vegetable salad. You’ve all made it with a torn-up lettuce leaf base, cauliflower, red peppers, celery, yellow pepper, broccoli bits. Then a bag of frozen peas topped with so much mayonnaise one gets giddy thinking about it, a big handful of sharp grated cheese and a tablespoon of sugar sprinkled on top. Wrap the glass dish in Saran wrap and refrigerate until time to take it to the party.

The hosts were grilling burgers and hot dogs and someone brought Blue Bunny caramel ice cream. Packages of pretzels and cookies and chips lined the table, and the health-minded included trail mix with tiny marshmallows and chocolate. Does it go without saying? The homemade crunchy green and red and yellow salad was a hit.

Eight months later, Donna and I are in the fusion unit of her oncology site, and the drip has started. Donna is tethered to her chair, and she leans forward to hear the woman at the next station as she begins whispering: “Is this your first time?” “How long will this take?” “When do you come back?” Donna’s kindness and reassurances ease the woman’s anxiety, but the husband’s eyes are guarded. Not so sure it will be as simple as that, he’s saying. This is cancer.

There’s a flurry at the door, a stomping of boots, a cape flung off, and Peaches sashays into the room. She now has a wispy crown of white curls, and she wears all black with hoop earrings of gold again, bangle bracelets and platinum rings, and magenta lipstick. Her voice booms. She will say later her voice is her trademark, it commands attention and interest and laughter and annoyance and drama. It says: Peaches is here.

Donna catches her eye mid-entrance and says, “I have something to tell you.”

Peaches’ station is behind Donna’s, and she briefly acknowledges Donna before taking charge of the nursing staff, the snack trays, the other cancer patients. This is her last day of being 69; tomorrow she’ll be 70. SEVENTY.

She laughs and laughs and acknowledges and repeats the compliments. She makes each patient feel invincible, at least for this moment of safety, cuddling in the soft white blankets and cradling cups of warm cocoa.

Donna hears the scratching of Peaches’ IV pole before she sees her head peering around to look at her. Peaches has taken her chemo pole for a walk, she says, and she stops beside Donna’s chair. “What is it?” Donna tells her that her husband died on Christmas Eve, and this is her first visit without him. She’s wearing a huge brown overcoat, sizes too large, and his leather watch band hangs from her wrist.

Peaches looks for a chair; I find one for her, and she slides the pole forward, and squirms around before she sits at Donna’s side. “Tell me.”

Donna’s hands tell the story with a flurry of sadness: his collapse at the door of their retirement condo, the hospitalization, the coma, their children coming to say good-bye. She leaves out the decisions that were made; she leaves out her voice calling to the children in another room, “I am grieving here.”

Peaches is a good listener. She watches Donna’s face and she leans forward, not prompting, just waiting for each piece. Donna describes the memorial service and laughs when she explains the old storytellers coming from California and Michigan to tell old stories. Her voice is quieter, listing the choices of his music. Finally Peaches leans back; she has absorbed the story of loyalty and sadness, the unexpected peace.

Peaches nods her head. “I forgave my mother this morning,” she begins. “I am having my 70th birthday tomorrow, and I looked into my heart and I let go all of my sorrow and anger at her. It took me all morning and I did not want to do it, but it happened.”

Donna and I both look at her face and see the tears welling in her eyes. “She was mean, so mean. She made me dislike me. She never liked me. I was never her daughter; I was just somebody else.” Peaches starts to laugh, a smaller, quieter laugh. “But I like me now. And I like going out to drag shows. My friends are taking me tomorrow, for my birthday, cause that’s what I like.”

She wipes her cheeks, and again she says she forgave her mother.

She shakes one of her bracelets, each charm crowded against another. “I got two yesterday. One’s this suitcase here ’cause I will be traveling when this” – she shakes the IV pole just a bit – “is finished. And that one is just beautiful: it spoke to me right away, right there in the jewelry store.” She takes off the bracelet, strips the charm free, and holds it up to read. “Too small. But it is an important sentiment.”

She asks me to read it aloud. I can’t. She hands it to the youngest nurse. No. Not one of us can read the tiny print but she repeats over and over, “It is just perfect. It spoke to me.”

Peaches slides her chair back a bit. And you can tell she wants to extend her celebration of being 69 for the last time. “And I tried on some sassy sisters,” holding up her fingers to show that it’s now rings she’s talking about. “Mocha said, ‘Hey these guys won’t charge you tax to try them on.’ So I did. Sassy, sassy sisters. $1000. I’ll go back for them.” She laughs again. “And I’ll wear them to the drag show. That’s where I go. They always know me there. My friends know me.”

Donna looks at her own hands, glances at me, and then back to Peaches. “You go, girl,” she says. “Get those rings. Both of them.”

Peaches stands up, pushes the IV pole around, dances just a bit, and leans over to Donna. “I’m sorry about your husband, but he got you home. He took care of you to the end.”

I say quietly, “Peaches, it was good to see you again. Thank you for this morning.”

She looks at me and pauses, seeing me for the first time. “Oh, I know. That salad. I can taste it in my mouth right now.”

I wrote “Peaches” several months ago after I listened to this conversation. Peaches took chemo patients and sit-by friends and the nurses out of the infusion room to a dazzling place, where she was going to celebrate herself and be beautiful. She knew what she was doing, I believe; it took me a long while to see that.

Jane Krebs made plenty of masks in 2020 and plans to make more in 2021. She also continues to create non-paper towels, Kind2Nature. Her day job for many years was teaching secondary English and studying with many, many students in the Carlisle Area School District. She tutors as needed, most recently with young community basketball players over the summer.

Krebs also meets monthly with her writing group which originated through the Capital Area Writing Project in 1985. She is pen pals with Max, Simon, Oliver and Greyson – little boys who are learning to read and who like getting mail. She and her husband also have two granddaughters, Emma and Ella, who are good students and good friends.
Home | Archive | Issue: Spring 2021
Next: Barbie’s Bleak House; or, Married with Furniture »