Child of Sky and Earth
by Christie Cochrell 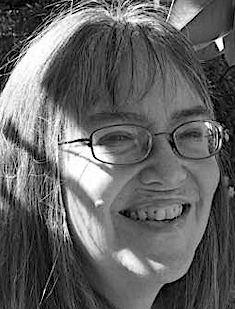 . . . and, when he shall die,
Take him and cut him out in little stars
And he will make the face of heaven so fine
That all the world will be in love with night.
– William Shakespeare, Romeo and Juliet
The day her colleague, lovely Simon the peacemaker, the one to see both sides of everything, was killed, Josie drove with aching heart across the upland hills to Waimea, the science center, to resign. To protest the wrong done, she’d leave the job she’d loved that now made her heartsick, the galaxies she’d drunk like breath itself, her fated Faustian bargain. She would return to earth, chastened and sorrowing, to earth maybe not sacred or haunted, but steady underfoot.

Simon and his partner, Will, had first shown her the mountain. The astrophysicist in strange alignment with the freelance photojournalist in his soft sea-turtle boat shoes who introduced her to Mauna Kea, “first-born child of sky and earth,” as they drove up the volcano to its summit. Simon talked about its ancient sacred trails, its shrines: blessings and burials. Its lichens and leles, the wooden structures on which offerings were placed. Stone altars, too. A realm of mountain spirits, ancestors, and gods. And always those coming on pilgrimage to honor them.

That was her first day on the island, where she’d come for the great telescopes, the state-of-the-art observatory that had offered her a job. Josie was thrilled and humbled, above the world in that particular locale, to feel she really, finally, belonged, had earned her place there on the threshold of the universe – the vast, as yet unfathomed skies. She was greedy for stars, wanting them all, and more. And here she was.

Will hadn’t mentioned the damnation of the telescopes, not yet – one subject about which he and Simon disagreed. As dark grew around them and a chill crept up, he said softly, “Many Hawaiians believe this place must be returned to the ancestral gods. That scientists and their construction sites have desecrated the summit, forbidden to all but the highest chiefs or priests.” Atop the desecrated mountain, defiant, stood the thirteen telescopes, probing and unrobing the skies.

“But nowhere else is it this clear. No other instruments are this precise and powerful.” Simon answered his partner evenly, touched Josie’s shoulder, showed her the trembling stars she’d come to meet.

It was Clary who’d lured her there, the past they shared more seductive even than the job he’d offered. The night after her interview they lay on his lanai on one of his familiar Peruvian rugs. He’d poured rum into guava juice, which they drank listening to music from the old days, Clary watching the southern stars while Josie looked only at him. He’d turned, and they were skin to skin, his eyes the burnished copper color of the rum. The old enchantment had been stronger than ever, stronger than good sense, and she didn’t resist.

When she came back in three weeks to start work, no one met her. She’d had to make her way alone from the airport to the Kohala Coast. Clarence, as he suddenly was, had been in a meeting – his job too serious to leave for even two hours. Clarence, big deal Project Director, who’d turn cold and calculating almost right away.

But Simon somehow had known she’d come, bless him, and made a point of welcoming his new coworker to the island. He’d called as soon as she got to her rented cottage on the far north shore, and insisted she join them for supper.

“Will had always wanted to own racehorses,” he said, showing her some fine medium-format photos of Simon in a white top hat watching English thoroughbreds at the track in Kamuela, and of an abandoned racetrack in Hilo, in the rainforest, pleasingly overgrown with grass within the curves of its white rails.

“Next to the zoo,” Simon added. “It’s like no other zoo you’ve seen: It’s got a water buffalo, peacocks, and a white Bengal tiger that they say bathes in a pool of water hyacinths.”

They owned a house with views of Parker Ranch, pasture and grassy hills, a little running fence. A two-story with pale green roofs (“Belgian endive” Will called it; “matcha” Simon countered) and pristine white trim, and a little covered side-porch where they liked to sit.

Through outdoor speakers they listened to Bach, or, alternatively, Burning Spear. Their musical choices eclectic as themselves – Simon, trim and of Scandinavian complexion, and Will, a mix of Hispanic and Middle Eastern, willowy and dark, the freelance journalist who made ends meet selling upscale footwear, sandals, and espadrilles with dreamy names like manta ray, Kohala sand, guava sorbet, frangipani. The most perfect couple she’d ever known, despite the chasm of beliefs threatening them. Both identified with the Hawaiians, but Simon was enthralled by his calling and obligated to his boss, firmly planted in the enemy camp.

Josie was soon torn too. There in her house with tin roof and koa floors, another approach to the skies struck her. The ancient Polynesians navigating by the stars. A line from Rabindranath Tagore she taped up on her wall:

The trees, the stars, and the blue hills ache with a meaning which can never be uttered in words.

Once at dark, far south of where she lived, with Will and Simon she crossed an ancient battleground on a drive to the southmost volcanoes. It felt as holy as anything she’d ever known, that plain of spirits, as night fell and the planets rose and the three drove together down the Kona coast.

The other battleground was terrible. The battleground between her colleagues who on Mauna Kea had just photographed a beautiful new spiral galaxy, and those who knew the mountain was sacred and should be given back to the ancestral gods.

Clarence had joined that battle to the death – no longer the lithe, funny Clary of her memory, but a corporate king hard-eyed, hellbent.

It was a protestor who shoved Simon, killed him, but Clarence was responsible in truth – insisting he deal with the angry crowd, certain old-timers who couldn’t stomach outsiders. The scientists, the gays, the racially suspect, the haole who’d stolen their island, the sacred mountain – even the skies. Simon had been shoved in a moment of anger, as he gently tried suggesting that they talk amicably, find some way to compromise. He’d hit his head on a slab of concrete, bled silently inside. Clarence had known how the quiet astronomer hated confrontation, but ordered that he take charge anyway.

He’d tried getting through to dissenters, one by one, in the weeks before he died.

“The ancients respected the stars, so I can’t help thinking their gods might have liked to look through these powerful instruments which help bring them closer to us.”

It was all related. Intertwined.

“You know it was Kamehameha, your great king, who let the British build there on the volcano, next to the old heiau. His birth was forefigured by a comet, probably Halley’s; ancient sailing ships were named for constellations.”

But reason hadn’t worked, or empathy. It seemed futile to try, when there was the chasm of molten lava between them.

After resigning from her job at the Observatory, Josie helped string leis for Simon’s traditional ceremony, went with Will to Hilo to the zoo and the racetrack. It was the near-at-hand that interested her now. The fragile, tiny things called insignificant. Precious and doomed.

So much misguided hope she’d had once, Josie thought. That love could transcend anything. That humankind was steadily advancing, learning all the time where they’d gone wrong. That science, making things better, universally, would triumph in the end.

But now she saw the way forward was step by measured step – navigating with others’ help, loving the stars not because they were grand and glorious, something to win, but because they were what she had in common with kindred spirits. Their presence spoke to her sorrowing heart. Simon was somehow there, in them, around her in the night, like Romeo in Shakespeare’s play, like myriad beings, mythic and real, and their enduring stories. 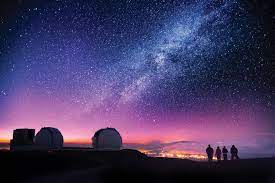 Since late September 2001, just after 9/11 when I spent three weeks near Mauna Kea on the Big Island of Hawaii, I’ve been intrigued by the debate about building cutting-edge telescopes on the mountain sacred to many Hawaiians, and by the differences of belief that coexist there – if uneasily.  Which wins, and why?  There’s been no resolution over these past twenty years; and recently, of course, science itself has come under attack worldwide. Debates of every sort seem to have polarized sharply, lately, and this story presents many dichotomies. Ways of seeing, ways of being – and maybe the possibility of compromise.

Christie Cochrell's work has been published by The First Line, Lowestoft Chronicle, Catamaran Literary Reader, Amarillo Bay, Cumberland River Review, Tin House, and a variety of others, has won several awards and been nominated twice for a Pushcart Prize. Chosen as New Mexico Young Poet of the Year while growing up in Santa Fe, she's recently published a volume of collected poems, Contagious Magic. She lives by the ocean in Santa Cruz, California – too often lured away from her writing by otters, pelicans, and seaside walks.

Next: Not for Sissies? »
Home | Archive

4 Comments on “Child of Sky and Earth”