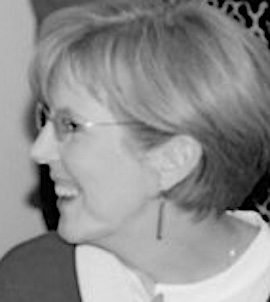 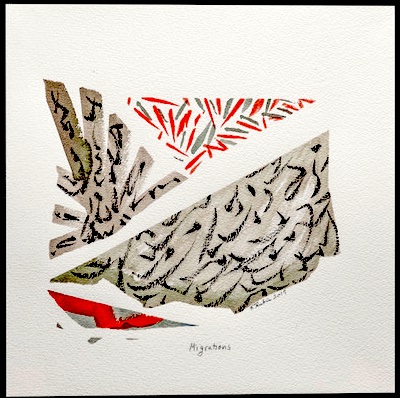 Migrations, watercolor by Eleanor Rubin
The day before, like all last days, stands out only in its normality. My last class of the week. Mexican food with friends. Normal. A late catch-up with roommates. Normal. At 11:31, I turn out the bedside light. That single moment – profane, sacred, a hummingbird’s wing – vanquishes all light, marking the end of Normal.
***********

Death has a way of rearranging the molecules. When it comes, atoms cleave from one another, dissolving the molecules that once held the living thing together. They’ll loft themselves into the formless current where they’ll bond again into molecules and become something comfortably new. They’ll do this over and over again, for eternity.

My memories of that time, now nearly a half-century in the past, are like those atoms – flickering, broken-off bits, seeking a safe place to settle. I remember the early-morning phone call and my father’s terse demand that I come home, and when I arrive, my mother’s stricken face at the door. There’s me, pulling a newspaper off the rack at the grocery store where I have fled in a manic effort to be useful. There’s the blow that empties my chest cavity when I read the day’s lead headline.

A few days later, there’s my father in what he thinks is the privacy of the hallway. He leans face-forward against the wall, one arm crooked over his eyes. He’s crying. He doesn’t want to be seen – it’s the way he was raised – but the grief is too much.

And there I am again, three months post-Normal, slouched at my desk in a French class that is way too early in the day. I’m wearing a grease-stained corduroy coat, which I’ve pulled tightly around myself, arms gripping my body. The room is warm enough, but the coat stays on. The French TA asks us to write about what we did over winter break, so I tell her what she wants to know: “Mon frère est mort, et ma famille est dévastée.”

They tell us that denial comes first. When the writer Joan Didion lost both her husband and her daughter in the same year, she entered a period of mourning marked by what she called “magical thinking.” She finds she can’t give away her husband’s shoes, or donate his corneas, because she can’t help feeling he might come back, and he’ll need his shoes and eyes. That’s what denial is: brushing up close to insanity, tempting fate a little, knowing that the things left behind – shoes, memories – are the rail on grief’s staircase. They’re what we reach for when we feel ourselves start to tumble. After Rich’s death, I teetered on those stairs.

My mother and I sit trancelike in the church pew. Next to us, we bear the noisy, shattering, grief from my usually stoic father and my sister. I’ll remember almost nothing of the eulogy. When the service ends, teenagers with grim faces file past the open casket to pay respects, but the line follows a trajectory that’s a good four feet from where my brother lies. They don’t want to look – that I remember.

When the mourners depart, I hurry to Rich’s side. I expect my family to close in behind me, I even want them to, but they don’t. They are giving me time. I bend over his body, one hand on his blond head, the other on his chest. I’m startled by how cold his head is. With no life vibrating there, his chest seems a hard, hollow shell. He is dressed in a dark suitcoat and blue striped tie, the same thing he wore last spring in his high school graduation photo.

His stillness is unbearable, and I am desperate to hold the molecules in place, so I beg him, “Rich, get up! Just get up! For God’s sake, Richie, get up – get up – get up!” In the moment, I sort of know it’s crazy, but it doesn’t feel crazy. It feels necessary. A last chance before the box is closed. Before the shovels of dirt. All I want in that moment is my brother. The longing in my body is savage.

Two weeks later I’m back at school, and though I’m walking the same campus I’ve walked countless times, the landscape seems foreign, inverted, a funhouse. Students shuffle by distractedly. I feel cut open, as if part of me, perhaps an arm or a leg or a lung, has been ripped away. It seems impossible, but as I make my way to class, no one notices the angry, bloody remnants of the missing part. I pass by, but they don’t even look up.

What I can’t remember, or never knew, about the Incident, I piece together: It’s mid-October, but the weather’s been warm, so crickets still trill in the dark along the narrow road. Tall trees, still thick with leaves, are ominous black shadows. The moon is languid, her light pallid, as she descends. A waxing crescent, she symbolizes eager youth, an adolescent taking first steps toward fullness. On this night, though, she’s an ironic, spiteful, bitch of a moon.

The racers will have edged their cars up to a white line painted across the road for just this purpose. A Plymouth and a Pontiac, big cars, comfortable with speed. They’ll need to be, as there’s been some trash talk, and a six-pack of beer is at stake. I know this for sure, about the cars and the white line and the beer.

In the road up ahead there’s a gray Datsun 210 slowing to make a turn. From here, it looks miniature, like a child’s toy, vulnerable and guileless under the smirking moon. There’s a sudden noise, hot and guttural, as the racers charge off the line. In seconds, there’s an even louder eruption, like a groundburst. In the cataclysm, two bodies hurtle through a windshield. Rich’s passenger, a 17-year-old neighbor girl, dies first. She’s gone before she clears the Datsun. Rich is alive, barely, in the roadside dirt.

Interminable minutes pass till he is lifted into an ambulance and taken to the hospital. My parents are there now, too, and have been sequestered in the waiting area, but it’s a small hospital and they can hear him from there: “Mom, my legs hurt! Mom! Mom, my legs!”

His last words to them. To anyone.

On that first day without him, I sit in his bedroom weeping great ruinous sobs that leave me dizzy and spent. My mother holds me till it’s done. Later, I find Rich’s mangled eyeglasses in his desk drawer along with his other effects from the ER. I cradle them gently. It’s like the Kevin Bacon game, with just one degree of separation: Rich was still wearing them, there in the dirt, as the molecules began to quiver.

That night, I slept in his bed.

Some scientists believe trauma changes a person’s brain, altering a molecule linked to the function of a person’s DNA, a change that’s called “epigenetic.” It’s a change that may leave the person less emotionally resilient, and can pass to the next generation. I don’t know about that. But often when I’m driving, when I make a turn or change lanes, I flash on the thought that there might be a car that I’ve failed to see bearing down on me, and I brace myself for the impact. When the explosion doesn’t come, I wonder how it will feel if it ever does. Sometimes I wonder how it felt for Rich and his friend.

There are times, too, when I worry about unlikely events: an irredeemable mistake at work, small tree limbs growing into telephone pole guy-wires and somehow starting a fire, whether those raccoons chittering in the backyard could possibly get into the garage or under the house. I don’t share my fears with others. But I ask myself, “What are the odds of that happening?” And always there’s my response: “Yes – what were the odds?”

I’ve lost track of the corduroy coat Rich wore when he rode his dirt bike or worked on his cars. It would be a comfort now, to have it. What remains are the contents of his wallet: a university ID, a fishing license, his Vietnam-era draft card. There are photos: an Opie-esque five-year-old in a striped T-shirt; an eighth grader clowning for the camera with a beach towel on his head; a high school senior accepting a football award; a snapshot from prom night, his hand clutching Cindy’s. There’s also his leather visor, a maroon and navy striped muffler, and a condolence note from a childhood friend, the gentle boy from around the corner, who wanted my parents to know their son had been kind to him.

My memories of Rich are the filmy last vestiges of his molecules. I long ago surrendered to the sorrow they engender; after 47 years, that sorrow can overwhelm me. I know it’s been long enough. But all mourning is born of love, and mine connects me to Rich. If I were to lose that, he would die for me all over again. That’s one of my fears: that I could think of him and feel nothing, my own chest an empty shell.

But I recall what I know about atoms and their talent for renewal. As long as I am on this side of the dirt, there’s hope for another new Normal, one that’s peaceful and lasting, and offers balmy refuge for the things that hurt. I believe that state of equilibrium, that elusive grace, is possible for all of us who grieve. I believe I can find it, still, if I just keep lofting myself into the current.

Last year, when the 46th anniversary of my brother’s death rolled around, I realized two things: that in all these years, I’d never shared the details of his passing with anyone, and that soon, someone would speak Rich’s name for the last time. My reluctance to talk about the loss outside the family stemmed from my belief that it was just bad manners to talk about messy private things that might upset others. That works out swell for others, but isn’t so great for someone who is grieving. As novelist Pat Conroy wrote, “The story not told could be the one that kills you.” So I recounted the story on Facebook and found that my friends are plenty sturdy, and incredibly supportive. Their responses warmed my heart and led me to explore writing as healing. That led to this piece, my first attempt at lyric essay and my first time sharing the full weight of that awful weekend in October 1974.

Donna Bridewell is a retired journalist who spent 37 years in newsrooms working as a reporter, copy editor and page designer. She started writing essays in retirement and is a freelance editor. She is currently at work on a memoir of sleep.

Next: Shades of Love and Duty »
Home | Archive