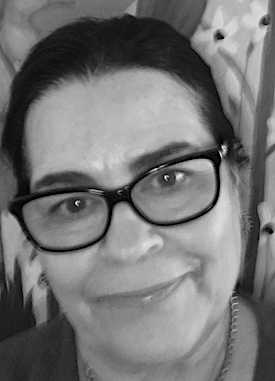 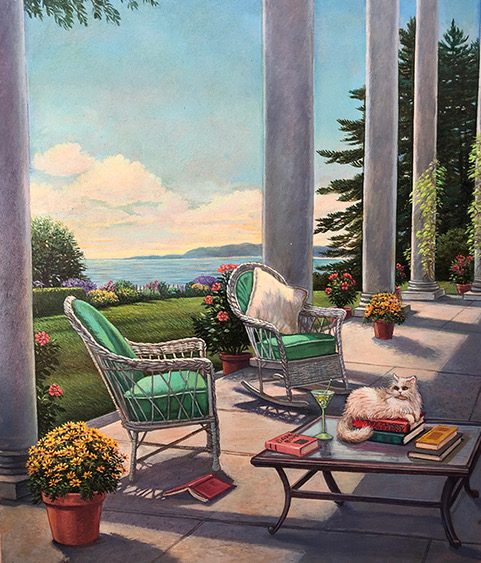 Another lake with a drink. Painting by Teresa Fasolino
My favorite days unroll at warp speed to unexpected endings. You stop what you are doing and smile for whatever serendipitous event visits you. This was not one of those days. I was at work when the call came. My boyfriend was feeling ill and missed the flight from Reno to Las Vegas. He was still in the hotel at Lake Tahoe, Nevada. In another hour it was determined that he was extremely ill. I went home, grabbed a small overnight bag. I arranged a dog sitter and booked the next flight to Reno.

Scott and I were coworkers of long duration. Our two-year workplace romance was clandestine.  A secret easy to keep because he was 30-something and I was not. The few people who knew thought him a fling. They were sure he would leave me as I aged into infirmity. The innuendo was that I could be another divorced woman who ends up on Dateline. All I knew was that he was a good person and I loved him like no other. The possibility of a future was not on my radar.

At the Reno airport I discovered that the Lake Tahoe shuttle only ran every other day. This was not that day. At the rental car counter, I received a message from Carla, an emergency nurse at Barton Memorial Hospital. Scott had been admitted after hotel security sent him by taxi to a Nevada Quick Care Clinic. He was then transported by ambulance to the hospital on the California side.

The rental car vintage was pre-GPS. I relied on the directions of strangers and ended up on the wrong side of the lake, blinded by the sun. A friend in Las Vegas guided me from the map on her laptop. I arrived at the ER late at night. The hospital doors were closed. I walked around the darkened building on the crunchy gravel to the ER and was told that Scott was in ICU. They suspected SARS. Gowned and masked, I entered the glass room. The oxygen machine beeped the rhythm to my heart. Scott was communicative so I stayed. We clutched hands and talked to the nurses.

I headed back into town to his hotel room. On the way I was stopped by a female Highway Patrol Officer. “Ma’am, your lights are off. Here at Lake Tahoe, it usually means you’ve been drinking.” I began to sob. Exhausted past exhausted. I explained my story. She let me go on. A book, a glass of wine, and midnight French toast: as comforting as it gets in a strange town. I spent a restless night in his room as I contemplated the alternative diagnosis possibility, Legionnaires’ Disease.

The next day we learned that two other people with the same low oxygen symptoms had also presented to the ER. They died. The parade of doctors began. Tests mandated by the State of California. The nonstop beeping validating the unspoken possible prognosis. Reality TV droning on and on.

Our secretary booked me a room at a Motel 6 for the duration. The walls were plywood. At night I shoved the table in front of the door. Intoxicated tourists drifted by the window. I found a T.J. Maxx and bought new underwear, and make-up at the Rite-Aid. I fielded all his phone calls. Confronted his boss and co-workers who had abandoned him in this condition. I ate dinners in the hospital cafeteria.

Slowly Scott improved. I celebrated with lunch at a chain restaurant connected to the motel parking lot. Back in his glass room, I fell asleep sitting in a chair, with my head on his bed. I wasn’t sure if it was stress, altitude, relief, or the glass of cheap restaurant wine.

He did not have SARS. The origin of his illness remains forever a mystery. Oxygen levels went up enough to contemplate release. He was released on my birthday and we headed home.

Our clandestine relationship spun from the shadows into the light. A few years later we married, a possibility never imagined because the bride was 60 and the groom was 43.

This story simmered for over a decade. In 2021, the National Hockey League played a series of televised games from the south shore of Lake Tahoe. My memories of our week in a Lake Tahoe ICU came back in technicolor as the cameras scanned the lake. Before Scott’s Lake Tahoe medical emergency I never imagined we would overcome our 17-year age difference. As time went on, we constructed a strong friendship fueled by laughter and the luxury of conversation. Decades after we met our age difference no longer mattered. We are gifted with an unexpected life.

Kathleen Collins lives in Las Vegas, Nevada. Her neighborhood sits on the cusp of the desert nestled in a ring of mountains. This beauty is the price she pays for extreme summer heat. She started writing four years ago after escaping from three plus decades of a telecommunications career. She has lots of stories to unravel. She is married, a mother of one, and her two very favorite people call her Nana. Her favorite memories are woven from travel and a life filled with love and laughter.