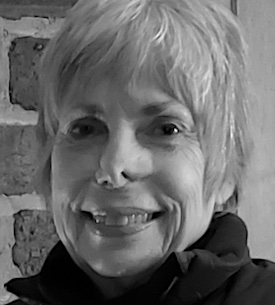 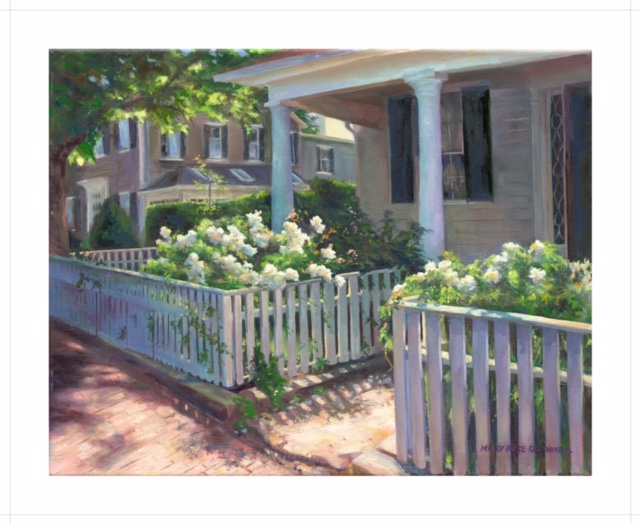 She’d known it would be.

What surprised her was how quaint it all looked – quaint and remote and charming, not normal, not intimately familiar. The evergreen bushes beside the front stoop, secret and dark, prickly and pungent. The three green wooden front steps. The green shutters and the flower boxes Daddy had built, and the petunias spilling white trumpets out of them.

The screen door and the doorknob, silver and shiny with the little dent in the middle. Her nose had just fit into it, and she’d imagined that she’d made that dent with it.

She wasn’t sure of the protocol for this kind of visit. Did you knock? Or simply walk in?

And caught her breath.

Because it was, even more than the outside, so the same and so heart-wrenchingly different.

Floral drapes drawn to prevent fading from sunlight. Gray rug. Overstuffed maroon sofa and chair with white crocheted doilies on arms and back. Brass floor lamp, switch projecting at just the right height for her to hang her Christmas stocking because the small post-war bungalow didn’t, of course, have a fireplace. Square gray vinyl footstool, slick and shiny, with the button on top. And – God help us! – the Philco television set in its fake-wood cabinet, with the big round knobs that turned it off and on and changed channels (4: CBS, 6: NBC).

The low arch that led to the small box bedrooms. And the bathroom with the claw-foot tub. The eagles are holding me, she would think, as she splashed in the sudsy water.

The girl was standing in the arch.

So young in the thin light coming from windows in the room behind her.

You came, the girl said. I didn’t think you would. Ever.

I thought you hated me.

It’s – she lifted a hand. She’d looked at her hands the other day, corded, claw-like, years spilling their spots over the rucked skin. The girl twisted her hands. They were smooth. It’s more complicated than that, Clare said. Can we … sit down?

The girl shrugged. How small she was. How small the room was. They were larger in memory.

They sat. The girl huddled on the maroon sofa where she’d spent her chickenpox/ measles/whooping cough days. Her hair was dark, so dark, and it fell over her face as she looked down.

Was she wearing – pantyhose? And a skirt?

Clare took a breath. You asked if I hated you. I’ll be honest. I did. For a long time.

Because of the way you left. You just – No, she wouldn’t let herself do this, feel this. Not now. Not back here, when she’d come so far to where it had all been so safe, where she suddenly so much wanted to be and so much wanted to be away from. She said, smoothing her voice to neutral, Only because it hurt them.

The girl raised her head. How dark her eyes were! Clare thought, Are mine that dark?

How could it not have hurt them? I wanted things – they didn’t understand the things I wanted. They thought I should be – like everybody else.

You could have talked to them. And when the girl drew breath to argue, All right, tried to talk to them.

The girl said, Look at this room. They wanted me to live in a room like this on a street like this. Neat little houses and mowed lawns and big trees in the front and vegetable gardens in the back and screened-in porches if you could afford them where you’d sit and watch your kids playing hide and seek after supper.

She stopped. Her voice was high and young. So young. She’d always gotten the child parts in high school plays.

Clare said, They wanted you to be safe. Safe and happy. They didn’t know …

Clare remembered. Those roofs like wedges in the sky when it was just turning dark, and the angles of the houses, and running to hide behind them, and then knowing they were coming for you, to get you, to capture you. Yes.

Yes. She twisted those clean, impossibly young fingers some more.

But they were friends, Clare said.

I know. I know that.  But they turned – different. Out there in the dark under that sky. Or there was something more, something – strange – bigger – oh I don’t know –

For when you knew you had to get out.

The girl said, her voice barely above a whisper, They’d come after me.

You were Daddy’s and Mama’s only child. Their one and only, they called you. It broke them. And then when Tom –

The girl said quickly, That was an accident.

Was it?  Clare said. I’ve wondered, wondered all these years. I don’t think it was. And I don’t think they thought it was. Any of them. Tom was a hunter. He knew guns. You didn’t believe it was an accident – not really …

I didn’t make him, the girl cried. I tried to get him to see. But he wouldn’t. He didn’t want me. He wanted a – June Cleaver. It’s what they all wanted. Shirtwaists and vacuum cleaners and pearls.

I did try. To talk. She looked up, looked out of those dark, dark eyes. You know what he used to say. Did you get any work done today? I’d say yes, I got two good hours of research in for my term paper and he’d say no I mean work and that’s what Daddy and Mama thought, work meant stuff you do with your hands, scrubbing and fixing things up and digging in the garden. And there was girls’ work and there was boys’ work. And that other stuff, reading, writing, that was just – lazy. But it was more lazy for girls. That’s why I couldn’t –

She’d spoken in a rush, her high voice racing not so much through as over the words.  She stopped now. And said slowly, and then we met Beatrice …

It still hurt to go there. Clare said, quickly, So you left them. Packed your bags and got on a bus the day after you graduated from high school.

Why not? A day or two, some warning … even if they wouldn’t accept it …

You know why. I had to get out before Tom – said anything.

So you left him to blow his brains out in that shooting “accident.” And you left Mama and Daddy to search and search their hearts out for you, going after every flimsy, unlikely lead … That’s why there was that other accident …

Daddy had a heart attack at the wheel.

And why was that?  Don’t you think driving all night to follow up some desperate hope about you might have brought it on?

The girl balled her small fists. Don’t, she said. Don’t.

You didn’t even go to the funeral.

The girl’s eyes were sudden fire. After what everyone called me – us? Our minister, the whole church – all those people who’d taught me in Sunday school – how God and Jesus loved me. And now they didn’t love me, they hated me. It was all lies. All betrayal. They made – you – hate me – You even tried –

Clare closed her eyes. She didn’t need to look at the wrists. The scars were white now but they never went away. She sighed. It was a small town. There was so much – misunderstanding. Fear.

There was so much crap, the girl said. Violently. Still violently.

That too of course. She was so tired. Tired of thinking about it, tired of the way the thoughts bruised her. You can’t get out of a coffin without disturbing a single nail, she said.

She’d said it many times at many a 3 a.m. over many years. Tennessee Williams, she said to the girl. The Glass Menagerie. You’ll read it someday. And you’ll understand it.

The girl shook her head, swiped her hair away from her eyes. So? Why did you come back? You got it all. You’re a doctor. You write books. And you got – her –

She looked at the young girl and shook her head. No, she said.

I didn’t get it all.

What? What didn’t you get?

The girl blinked. Me?

But you never – you just left me. Like everyone else. You hated me. You said so.

She nodded. Looked down at her old hands.  I wanted to leave you behind, to forget. To become someone else. But all the time – I was wanting you –

Probably. She smiled. You wouldn’t be the first person to say so. I told you it’s complicated. Well – maybe it isn’t really. I’m old. I have had, as you said, a good life. I have had all the bigger things we wanted. And I have had love. And that is bigger than anything.

The girl drew in her breath sharply, caught her lip between her teeth.

She’s dead now, Clare said. And as I’ve grieved I have thought about our life.  There is this – pain – in the center of it. Here. She touched her breastbone. How bony she’d become.  How her skin dangled from her scrawny arms, how it wrinkled in patterns like wave prints in sand. Where I have hated you. Lost you in hating. Lost – part of myself in hating you.

She helped me to see this, though I was slow about it. Because without you I wouldn’t be – well, here. You gave me who I am.

Those coffin nails, Clare said. Somebody had to rip them out. She leaned forward on the old maroon chair. Forgive me, she said. For all those years. Come with me. Where it’s light. Break out of here. Come with me now.

The girl looked at her in a long silence, long, it seemed to Clare, as the years between them. Then she said, Say my name.

Say my name. If you want me to come with you, say my name. Say who I am.

Of course it wouldn’t be unconditional. Couldn’t be. You didn’t just show up and claim forgiveness, no matter how hard the coming had been. Not after all the damage.

Self-deception, she thought, even now. It tasted like vomit.

The girl was waiting. Her face taut.

The old woman took a breath and said, Clare.

And watched the stiff young face begin the breaking.

A friend who had just turned fifty and I were reflecting on how we change as we age. To look back on our younger selves can produce anything from a wry grin to a disgusted shudder. We want to dissociate ourselves from “the way we were,” to lock those unsatisfactory selves back there, away from our now. Then, we imagine, we’ll be free to be who we’ve become. But that rarely works. We discover we can’t be fully who we are without acknowledging and trying to understand who we have been. After our talk I thought it would be interesting to explore this idea in literal rather than theoretical terms. What would happen if we could return literally to our pasts, to face the selves we once were? What if we could talk to those selves about the choices they made, and the reasons for those choices? What pain, what forgiveness, and what freedom might this encounter produce?

After receiving master's and doctoral degrees in English from The University of Chicago, Ann Boaden returned to teach at her undergraduate college, Augustana (Illinois). Her work appears and/or is forthcoming in Another Chicago Magazine, Big Muddy, From SAC, Gingerbread House, Ginosko, Ink Babies, The Penwood Review, Sediments, SHARE, South Dakota Review, Teach.Write, and The Windhover, among others. Her books include Light and Leaven, a creative nonfiction evocation of women who shaped Augustana College, and Fritiof's Story, a YA novel.

Next: Child of Sky and Earth »
Home | Archive