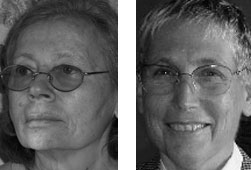 Irena Klepfisz and Nancy Stoller, close friends for over two decades, have been working in prisons for many years—Irena as a teacher and Nancy as an activist and researcher. Here they discuss this work and their concerns about prison life. Irena, a poet and a writer, currently teaches courses on Jewish women at Barnard College and goes weekly to Bedford Hills Correctional Facility for Women in upstate New York. Nancy, who has written several books on organizing, has recently retired as a professor of community studies at U.C.Santa Cruz. This conversation was moderated by Sandra Butler, Persimmon Tree contributing editor.

Irena Klepfisz is a poet, translator, and scholar of Eastern European Yiddish women writers and activists. She teaches courses on Jewish women’s history, literature, and culture in the Women’s Studies Department at Barnard College. For the past 9 years she has been teaching literature, writing, and women’s studies in the college program at Bedford Hills Correctional Facility. This coming fall she is offering a workshop on Yiddish translation at the YIVO Institute for Jewish Research at the Center for Jewish History.

Nancy Stoller began her career as an activist-scholar in 1960 when she picketed the Woolworth’s down the street from her college and then joined the Student Non-violent Coordinating Committee. She enjoys being both a participant and community-based researcher in progressive social change movements. As an academic, she has written extensively on the health care access challenges facing women, prisoners, lesbians, prostitutes, and people with HIV. After teaching at the University of California, Santa Cruz, for 31 years, Nancy is now writing a memoir about her experiences studying prison environments.

1 thought on “Lives of Confinement: A Conversation about Women in Prison”