Janet Goldner is a sculptor whose work crosses many cultures, focusing on the “beauty and genius of each as well as what we have in common.” She has been involved with African cultures since her undergraduate days at Antioch College, travelling first to Ghana and, years later, to Zimbabwe and South Africa. Goldner’s longest and deepest association has been with Mali where she has spent several months every year since the mid-1990’s.  She has mentored women artists and helped to create employment for rural women through textile projects. She is also involved in an ongoing collaboration with contemporary artists.  Her annual visits to Mali fuel much of her work.

Goldner’s pieces vary from monumental (measured in feet) to small (measured in inches). The captions for the work shown are hers and explain her intentions clearly.

[click here to watch a video of the installation]

[close]
Have We Met Installation at Colgate University from Janet Goldner on Vimeo.

Have We Met? is an installation with steel sculpture, video and sound. The video presents four aspects of daily life a remote village. Using images that are small, personal and human, I present a nuanced and positive image of Africa, countering persistent negative stereotypes. It is the richness of the diversity of cultural adaptations that continues to fascinate me.

Zig-Zags is a series of glyph-like gestural steel sculptures. Zig-Zags signify a road that is not straight but contains many twists, turns and detours.

The interplay of positive and negative space, of image and text is important to this large steel book. The five 3.5-foot by 4-foot steel pages ask, “Can we acknowledge the pain we have caused in the world, even as we struggle with our own?” 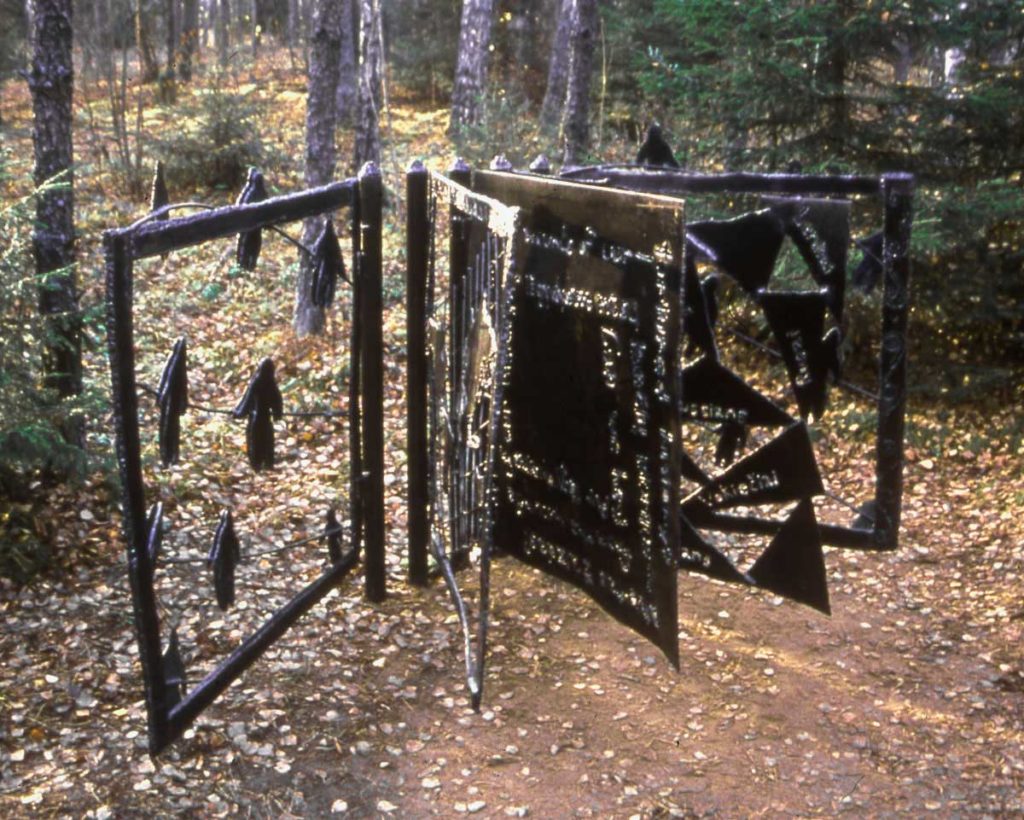 Can We Heal was inspired by a trip through Poland and the Ukraine where I visited the towns from which my grandparents emigrated. This large-scale work asks in Lithuanian and English, “Can we heal from the wounds of our tortured history? Lithuanians, Russians, Poles, Germans, Jews, Everyone.” It is part of the permanent collection of Europos Parkas, an outdoor sculpture museum in Lithuania. 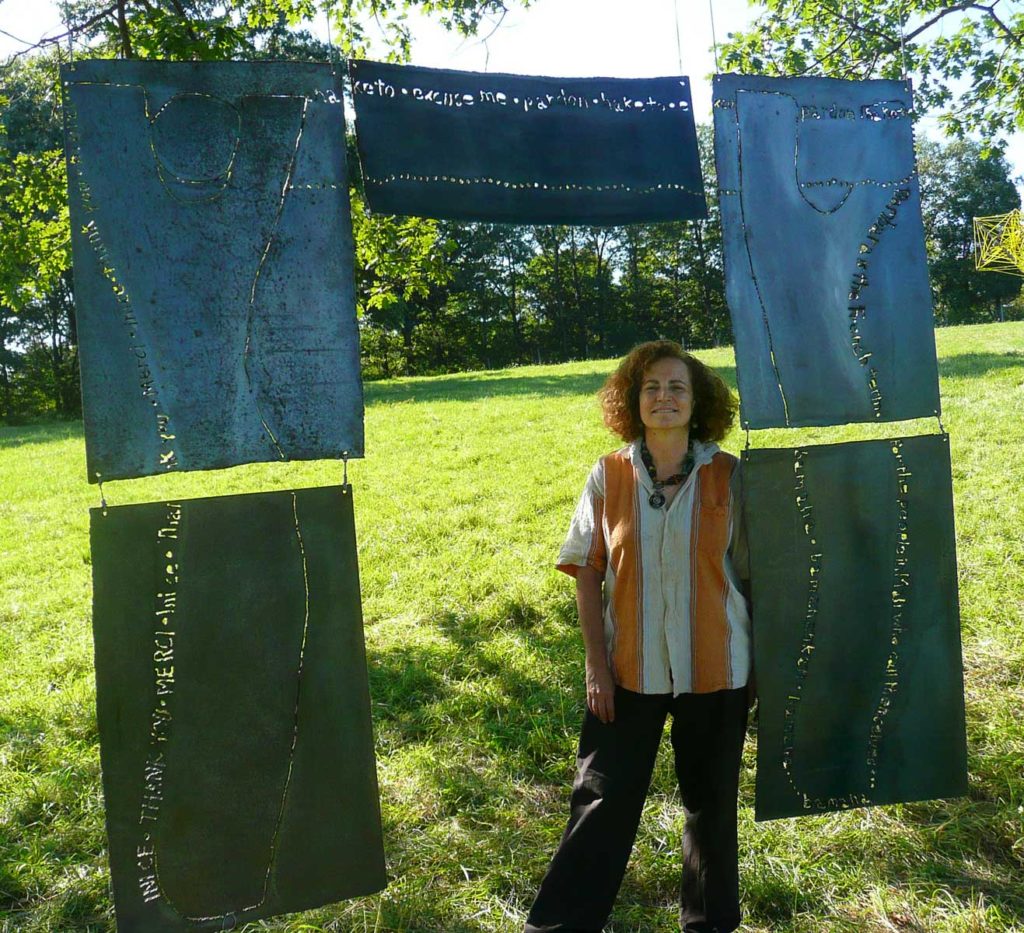 The Bamana people are one of the major ethnic groups in Mali. Under French colonialism, many of the existing names of people and places were deformed. And Bamana became Bambara.

Inspired by West African cast metal beads, this totemic patterned form is supported by a central post. It passes through the form as the thread passes through a bead.

Ideograms are a symbolic writing system. The three ideograms visible here refer to wake up, a big fire to purify the earth, and writing or knowledge of the unknown. 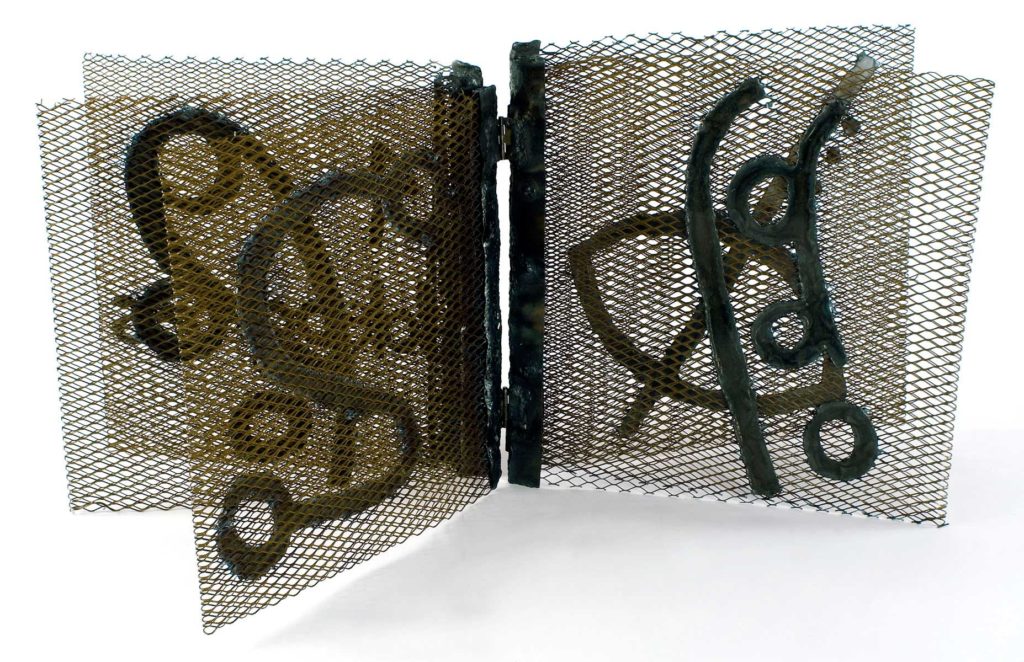 These ideograms are used by the Dogon people of Mali as part of ceremonies and divination.

This wall installation is composed of fabricated and recycled steel objects. In Bamana thought, along with north, south, east and west, water is the fifth cardinal point. Water determines where villages are located. Circles, like drops of rain, symbolize water. Ellipses can symbolize a body of water. 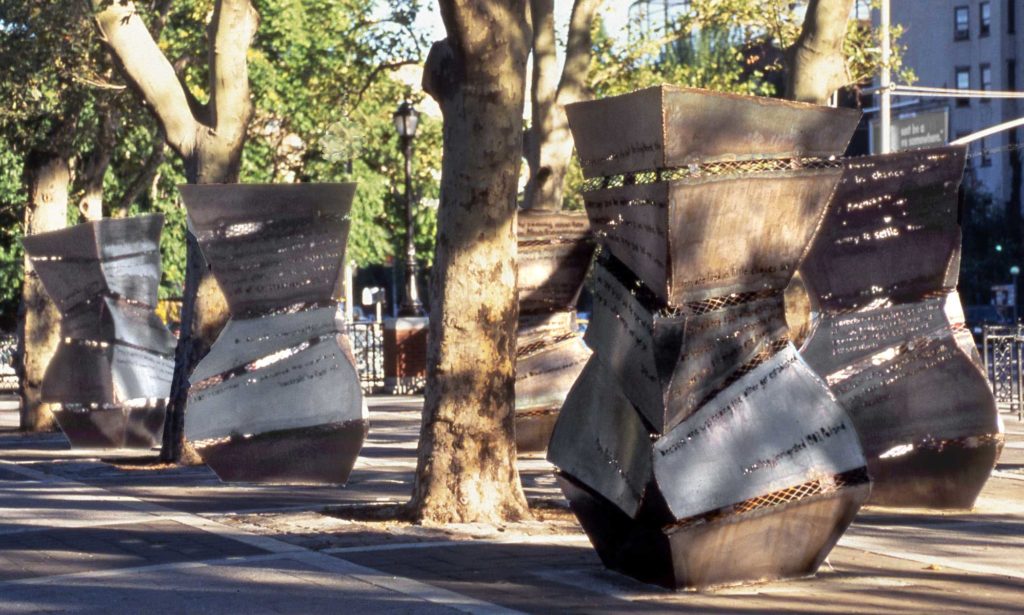 Most Of Us Are Immigrants celebrates immigration as an integral and continuing part of the American experience.  The five eight-foot tall steel vessels that form this public sculpture weave together the experiences of immigrants across time and across ethnicity. It is in the collection of the Islip Museum on Long Island.