but first it plays with fire,
burns holes in pockets.
It is full of pomp and circumstance,
whispers empty promises to many.
It beckons with a dark finger
to the most vulnerable
but seems to sing most happily
in the wallets of those who have
a lot of it. It conveys secrets
to politicians and shouts
from smoky rooms filled
with lobbyists—
It seems to reproduce itself
in the coffers of those
seeking office. It is never
sure of who its parents are.
Money talks,
but rarely tells the truth.

I haven’t written for a while. Life here is challenging, as usual. My condo fees have gone up and the guest toilet has a leak. Thankfully the other two bathrooms are working fine.

It’s been a really hot summer. Central air is a blessing, and the AC in my car works well. Some days have been too hot to go to the beach, and I hate to miss beach days.

My Internet, television and phone package is up for renewal with the cable company and I’m trying to figure out whether or not to switch to a competitor for a better rate. I’d have to stay in for an entire day to have a new system installed, and I don’t like being stuck in the house.

I’m stressing because I have to decide soon.

My family is good—well, pretty good. I’m still not happy with my daughter’s job choice. I told her, but she doesn’t listen. And I think she should be settling down. My son’s children are also a worry. The older girl didn’t make the cheerleading squad and is taking it hard. Her parents don’t think it’s a big deal, but those disappointments can have long-lasting effects, don’t you agree?

Five is a lot. I think it’s great that my donation can help you to keep your family intact. I don’t know much about your country. Was there a war recently? Is it hard to get food and water? I can’t imagine that.

I hope to write again soon, but you know how hectic life is. I’m heading out now to meet some friends at the beach. I hope you have a great day.

In the summer of 1979, my husband, Robin, and I and our three kids vacationed in Gulf Shores, Alabama. We shared a large, two-story condo with Robin’s brother Paul, his wife, Laura, and their four children. For one glorious week we prepared meals together, played on the beach, swam in the gulf, and took short excursions to nearby attractions.

One afternoon we drove to Pensacola, Florida, to browse at one of the malls. It wasn’t long, however, before the kids became restless, so we took a break in an ice cream shop.

The children, Laura, and I settled at several small tables while Robin and Paul approached the counter. They rattled off our orders and handed the girl their money.

She disappeared into the back, but when she returned, her hands were empty.

“What? Counterfeit?” Robin shook his head. “No way.”

“I checked it with our detector, sir. It’s bogus.”

At that moment, a uniformed officer appeared on the scene. “Sir, you’ll have to come with me.”

Stunned, I stared as the burly officer hustled my husband out the door.

“Where did they go?” I asked the girl behind the counter.

I turned to Laura. “Surely they’ll be able to explain this was an accident. We didn’t have any idea that bill was bogus.”

That’s when our twelve-year-old son Marty spoke up. “Don’t worry, Mom. Daddy’s been in jail before.”

My mouth fell open. “What? Where did you hear that?”

“Daddy told me.” Marty grinned, obviously proud he knew something that maybe he shouldn’t. “One time he had to spend a night in jail because he and another guy were driving drunk.”

Laura stifled a laugh. I glanced at the girl behind the counter, now all ears.

“Honey, that was a long time ago—way before we were married. Your dad was a very young man, and he learned his lesson. He never did that again.”

Marty nodded. “I know, but this still won’t be his first time.”

My errant husband managed to avoid a second incarceration. When he and his brother returned, we all cheered.

“Everything’s fine,” Robin said. “They checked my wallet, and I had two more counterfeit twenties. But I told them I must have received those bills when I picked up our travel money from my bank back home. They believed me. Even let me keep the bills so I could exchange them later.”

“Well, thank goodness you have an honest face.”

“Yeah, and it didn’t hurt that Paul here mentioned I was a director of a mental health center and he was a Methodist minister.”

One of the kids spoke up. “Can we get some ice cream now?”

Believe me, those double-dip cones never tasted so good.

On a cold January day I flew into a fit, a fiscal crisis. A sudden reality thrust me out of my dreaming. I had virtually no money left. I told myself I should have noticed. There were signs, but a quirky illness had made a mess of my brain. I bought a house too expensive for me, an interest-only loan to soften the way. It had a balloon and then another. I didn’t ask enough questions; it was the bubble-time of mortgages.

The house was a refuge, a place of recovery. It seemed to enfold me and my fragile brain-body. While I healed, the house held me like a gentle, kind lover.

There were the enormous old trees in the backyard. They did speak to me when I first stepped there. Whoooosh! Live here! Not in English, of course. Such a gracious invitation! I bought this plain ranch-style house for those trees.

I’ve resolved to sell, live more sparely. Three angels worked like dogs with me for a month, and my daughter, the visionary—to repair, to get rid of detritus, to rearrange artfully, paint a wall here and there in warming color, to organize my destitute closets—“stage the house.”

Oh my god, my mind could make order now in all this chaos. I was happy in this new incarnation of my home. It exuded grace and simplicity for the next owner.

I put the house on the market the first day of May. White and pink trees came into bloom up the street; a big basket of fuchsia geraniums dressed the porch. House sales were climbing. I wasn’t going to get much profit, but to live a clearer, smaller life seemed just right. I told my broker, “It will sell within a week.”  I had no reason to think this. I’m not a betting person. She listened, smiled, said nothing. Well, it sold—in six days!

The buyer took a long time to evaluate this and that. Early one morning I stood in the kitchen gazing, abstracted, into the living room. In that reverie the house spoke to me —a quiet voice—Don’t leave. We’ve learned to be a place of healing. We like that and want to do more with you. Not in English, of course. I’ve lived my evolving sense of the mystery mostly privately and now must choose to listen and act or be inert to the moment.

What started as a fiscal crisis became an epiphany—listen deeply, solutions may not come where I expect—be active, cherish home and land where I am—live simply to know abundance.

Money. I spent some today—never sure I’m worthy to own a new chair or a queen size mattress. Once I decide to spend, salesmen gather and descend, drooling at my scent. Me, penned in, an anxious lamb, running home in shoes that fit and have no payment plan.

My paycheck, so fresh and foolish, once again—left town too early (barely home a week before traipsing down sidewalks of groceries and rent). I consider how old money thrives: lounging lifetimes in secured accounts, gathering interest in off-shore banks, polishing the value of vintage cars in a heated garage, locking Cartier diamonds in a hidden vault.

My cash flow leaves me breathless as the next runner comes in quick on the fifteenth of every month—handing off the thin baton of living, buying, sleeping, and trying.

Not knowing what to think I walk to the estuary and hear coins jingle in the pockets of Piper’s Creek. Transfixed, I see the Fisher King is healed and I watch him, knee deep in all that flowing silver, spring to stand upon a fallen log, surveying all his verdant land. He pounces humbly in the creek and walks west with the current. I watch him tuck his long neck into his feathered cape, and ducking beneath a windfall of alder and fir draped across his path, harvest freely from an overflowing Grail. 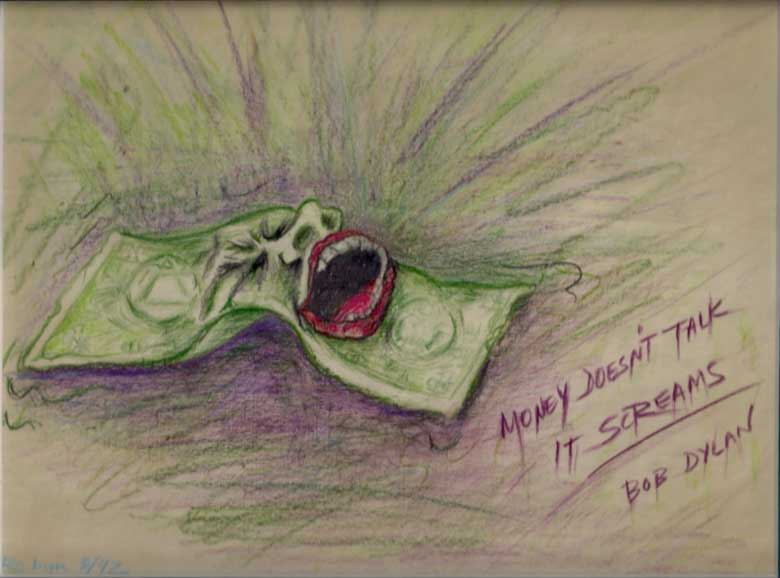