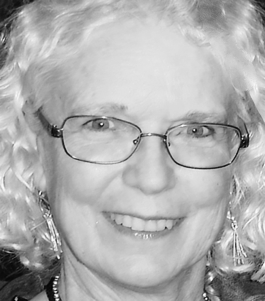 Lydia was just making sure she knew one end of a roundworm from another, so she could explain it to her students, when someone rang the doorbell. She’d forgotten she had one. She could turn off her cell; why not the doorbell, too?

When she opened the door she thought of people who always looked through the peephole before opening it, and wished she were one of them. Young man in a dark suit, old woman in an ancient print dress, formless hat over tight gray curls. Saturday. She knew before they said it, Jehovah’s Witnesses. Here to put her on the right path. Clarence and Esther.

“Sorry, I don’t have much in common with your point of view, you’d have better luck elsewhere,” Lydia said, closing the door – until something made her stop. His face. Wide brow, big eyes, sculpted jaw, and a laser focus on her that made her think he wasn’t in this for God. A guy that hot must have a lot of girls trying to get into his harem, so why would he look at her that way, in her schlubby sweats and stringy Saturday morning hair?

“We’d like to leave you with some information at least,” Esther said.

“Tell you what, take a look at our website, and if you’d like to hear more you could schedule one of us to come over for some special Bible training.” Clarence. Who had a name like that? Unless he were 83.

Esther shot him a nasty look. “We don’t have the resources to do that, but the two of us could come for a follow up visit.” Emphasis on the word two. So that’s why they traveled in pairs. Keep the young guy in line..

What if she said she was a pagan, or a witch, or an atheist? They’d give up on her, or would they redouble their efforts?

Lydia said, “Is it true you can have lots of wives?”

“Heavens, no,” he said. No one said that except her grandma. “Everyone gets us mixed up with the Mormons.”

He pushed a little in front of print dress. “Look, here’s our pamphlet, have a look at it.”

“You know you don’t have a chance with me, I’m a Darwinist, and I teach it in school.”

“Then you and I have a lot to talk about,” he replied. “Surely you don’t mean we all came from some form of bacteria.”

“Yup. Slime, pre-bacteria, the primordial ooze, ammonia and sulfur dioxide, the muck at the bottom of swamps. That’s what we came out of.”

He stuck his thumb under the collar of his shirt and pulled, as though to release steam.  She pushed her hair up off her neck and held her hand plastered against the back of her head.

But Clarence kept talking. “You know in your heart you were created by Jehovah, with all the intricacies of bone and muscle, and acres of skin. Did you know that skin is your biggest organ?”

“Some people think it’s the liver, but they’re so wrong,” she said, as a tingling cascaded over her shoulders.

He walked through the door. “Why don’t you wait in the car, Esther,” he said, without taking his eyes off Lydia. “I’m making progress here.”

Esther backed down the stairs, one hand on the railing, the other pressing her purse against her stomach. “This isn’t the way we do things, Clarence. I think you need to come in for some retraining.”

As soon as he closed the door she tore off her sweatshirt – it was killing her to be so hot. He seemed to feel the same way about his suit jacket.

“I often study in my bedroom, nice and quiet there,” she said, barely breathing as she backed down the hall.

“It won’t take long, it’s just a short pamphlet,” he said, “and I can give you the gist now, and then maybe after we can go over any questions you might have.”

“Don’t you know evolutionists are the work of Satan?”

“All the more reason you need special help,” he said, removing his tie and letting it slither to the floor like the snake that tempted Eve.

Lydia felt for buttons in the semi-darkness. His hand floated over her bare shoulders and trailed down her back.

“Is this where we get to know each other in the Biblical sense?” said Lydia, unable to resist, not wanting to.

She thought about making some joke about missionaries, when she let herself become shadow and touch and the scent of moist skin.

After, he rolled onto his back and she followed to rest on her side.

“I’ve never done it with a Jehovah’s Witness before.”

“And you still haven’t.”

“It’s just something I play around with, I’m really a Seventh Day Adventist, who got shunned for my beliefs that women should be at least the equal of men.”

Lydia lifted her head off his shoulder to see his profile: chin, nose, brow ridge too close to be in focus.

“At the next house you’ll say you’re some kind of Mennonite, I suppose.”

She pushed back the lock of dark hair that fell over his forehead, which lifted his face into a smile. “No, because I never liked suspenders.”

There was something genuine in his lying. He wore it like a summer shirt, open at the neck, invulnerable, sure no one would go for his throat.

After they dressed he took her by the hand to the front door.

“Isn’t this like Ruth or something, getting led through the wilderness?”

“One of those Old Testament gals, I disremember which one.” His kiss felt kind instead of passionate.

“You aren’t Clarence, are you?”

Lydia smiled, “I always wanted to be Rachel.”

She watched him, to see if he’d turn around. And he did, with a wave.

“Bye, Rachel, that was a good session.”

Mary Lewis writes stories about nuns, singers, guys with dogs and guns, meth addicts, creationists, lonely divorcees and people in crises of all sorts. She loves to paint her characters into corners and then surprise herself with the ways they find to get out of them. She has published many stories in the magazines Trapeze and Valley Voice, a story in Frank Walsh’s Kitchen, stories in R.K.V.R.Y. Quarterly, and an essay in the Wapsipinicon Almanac. She is seeking a publisher for her novel, Trouble Swings, about two young women discovering each other as Lesbians, and is well into her next novel.
Next: A Stake in the Future »
Home | Archive

4 thoughts on “A Good Session”