So the other day I was sitting at a concert daydreaming to the sonic dissonance of a modern piece by Thierry Escaich (not my cup of tea), when, eyes half-closed, I focused on a young woman two rows in front of me. She was wearing a sleeveless blouse and the sight of her smooth skin and firm arms aroused in me a poignant nostalgia for my former body, feelings that segued into a wistful reverie about the features that now, at 75, I prefer to conceal.

My first compulsion to cover up was not age-related. Fifty years ago, I blithely bared my midriff in bikinis, cropped halters, and low-slung hip-huggers. That ended in 1965 after I gave birth to full-term twins by an emergency C-section that required my obstetrician to make a hasty, rather haphazard vertical incision from belly button to pubic bone in order to get both babies out fast. The incision healed into an unsightly scar – shiny, crooked, furrowed. Compounding that disfigurement, the over-stretched skin on my belly never bounced back; I’ve kept my mid-section under wraps since I was 25 years old.

If I remember correctly, the rest of me was basically presentable until I was about sixty. During those decades, with nary a self-conscious tremor, I wore sleeveless tank tops, camisoles with spaghetti straps, even an occasional strapless, and never gave my arms a second thought. Now, I notice them every day. It’s hard not to, since my elbows in winter are rough enough to snag a run in my stockings – if I still wore stockings – and my upper arms keep waving long after I’ve stopped. The sight of all that jiggling inspired the second of my creeping cover-ups: three-quarter or full-length sleeves.

My back was another thing I took for granted until late middle age. Low-cut shifts and backless swimsuits were staples of my summer wardrobe and I never worried about how my bare back looked from behind. Until one day at the turn of Y2K, while trying on bathing suits before going on vacation, I caught sight of my back in a rear view mirror and years of blissful unselfconsciousness went the way of the bikinis and hip huggers. Somehow, pudgy little pillows had materialized below my bra strap and a fleshy inner tube seemed to have gotten stuck around my waist.

Since then, I’ve been paying close attention to how I look from the rear, which is precisely what I was doing the other day in the dressing room of an Upper West Side boutique. A filmy lace top had caught my fancy. I tried it on and loved the scooped neckline in front, then checked out the back in the three-way mirror but alas, clearly visible through the open-work fabric was my inner tube. After breathing out a pained groan, I took off the blouse and handed it to the saleswoman who threw me a commiserating frown. She had platinum-blond hair and red eyeglass frames and appeared to be in her late sixties.

“A nude bodysuit would solve the problem,” she said.

She smiled ruefully. “If you want to hide the damage, you need another layer. I’m just saying…”

I left without the blouse, dismayed. I’ve been a feminist for 45 years; shouldn’t I be beyond vanity? I’m against ageism; why can’t I accept with equanimity the natural depredations of aging? I’m a breast cancer survivor, for God’s sake; I dodged the bullet. How dare I give a damn about any physical change that isn’t life threatening?

Why am I hiding my arms and back, from whom, and what for? I’ve been married to the same man for more than 51 years and he’s not complaining. So who’s judging my looks? Who’s even looking at me? Who even sees me?

The late professor Carolyn Heilbrun, author of The Last Gift of Time: Life Beyond Sixty, famously remarked that part of the aging process for women is “getting used to becoming invisible.” She could commit a murder and get away with it, she claimed, because women over 65 are literally “invisible to the male gaze” and to many women, as well.

Susan Sontag wrote about “the double standard about aging [that] denounces women with special severity.” It’s obvious that I have internalized that severity and equally obvious that I’m not alone. Of the dozens of friends in my age cohort, I can think of only one whom I’ve never heard complain about sagging skin, spreading hips, brown spots, fatty knees, or downwardly mobile breasts.

Bette Midler once proposed a breast test that had nothing to do with mammograms: “Put a quarter under each tit; if the coins drop, you’re young enough to go braless.”

I stopped going braless in 1986. My boobs felt better supported in my Maidenform but I felt I had let down the women’s movement. As I respond to the physical changes of age by covering up additional parts of my body, I often struggle with the same thought: Have I betrayed my principles?

When I was 55, I wrote a book called Getting Over Getting Older, in which I took a full inventory of the physical indignities that were bugging me at that moment: the spidery vertical creases that soak up lipstick; the surrender of my jaw to the force of gravity; the choker of lines on my neck; the area of skin below my collar bones that was starting to look like crepe paper. Were I to update that list today, it would go on for pages.

Gypsy Rose Lee, who died at 59, once quipped, “I’ve got everything I always had, only it’s all six inches lower.” Just one woman I know still wears tank tops in public. Most of my over-60 pals routinely cover their necks and chins with artfully draped scarves, their arms with long sleeves or shawls, their varicose-veined legs with pants or leggings. A former classmate of mine dreads the approach of hot weather because, though she’d love to wear open sandals for comfort, she’s too embarrassed to expose her “72-year-old feet, the bunions, the callouses, the nails.” At 75, I’m still hanging on to my summer mini-skirts but this may be their last year.

In the heyday of Second Wave feminism, I believed women should quit obsessing about our appearance and focus instead on our power, intellect, and intrinsic worth. I deplored the beauty industry’s coercive advertising, the media stereotypes of femininity, the fetishizing of youth. Back in the 1970s, I thought the ideal look for an older woman was the boldly unadorned style of a Georgia O’Keefe, a Golda Meir, a Margaret Mead, women who seemed to brandish their wrinkled faces and aging bodies as trophies of a life well lived. The thing is, back in the 1970s, I was in my thirties and the concept of myself growing old was theoretical and abstract. Now that I’m well into my seventies, the issue of my physical appearance is more complicated. I’m debating whether, after sixty years of being blonde, to let my hair go gray, but I’m also thinking I might try a shot of Botox to fill the crease between my eyebrows that sometimes makes me look mad when I’m not.

While I feel grateful every single day to be alive and, at least for the time being, cancer free, and though I promised myself when I was sick that if I got well, I would only care about my health and not about my looks, the fact is I still care about my looks. I’m a product of Western culture and a casualty of the beauty industry and the media’s stereotypes. We can protest all we want but wrinkled simply is not as attractive as smooth. I, myself, would much rather gaze at the firm arms of the young woman in the sleeveless blouse than at my loose arms. To deny that aesthetic truth would be as dishonest as claiming that parched cracked earth is as pleasing to the eye as a grassy meadow, or that droopy flowers with brown-edged petals are as beautiful as a bouquet of fresh blooms.

So I continue to cover up the “damage.” However, I still have one body part that, to my mind, aesthetically justifies exposure: my shoulders. Accordingly, I own a half dozen tops with cut outs or openings that reveal the smooth, rounded caps at the top of my flabby arms. In other words, I still have skin in the game. 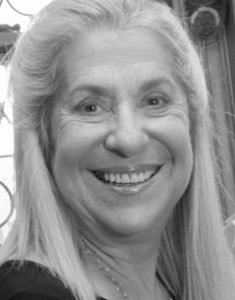 Letty Cottin Pogrebin, a writer, activist, and founding editor of Ms. magazine, is the author of eleven books, most recently, Single Jewish Male Seeking Soul Mate, her second novel, published on May 19th.