Poems came in from Bolivia, England, New Zealand, from France, from Peru, Puerto Rico, Egypt, from Israel, Italy, Ireland, from Mexico, from South Africa and Switzerland, from Canada and Australia. Thank you, poets, for beaming your poems to Persimmon Tree.

I read and listened for poems that take risks. For images that knock at a door I can’t help but open. Snow geese. Propeller fans, swirling. A pepper-pot. A map, crumpled. A fleeing woman wearing the hijab.

These poems reflect one of my core beliefs – that poetry is action. Poems, with their music and fresh words, working to startle, to delight, to crack open silence, overturn taboos, even create seismic shifts in perception.

Thank you to all who sent poems, and congratulations to our winners.

When you are old and beautiful,
and things most difficult are done,
there will be few who can recall
your face that I see ravaged now
by youth and its oppressive work… 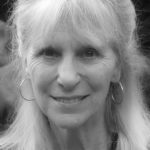 Mirrors weren’t my friends anymore, couldn’t stand what they showed me, the changing flesh, thinning hair that used to reach my knees, the drowning of names in a mud-thick water mind

the shorter breaths. But the voice of my ghost was kind. He told me it would end, soon. Touch me,
I begged. He didn’t but the geese began to rain every day, and I hummed for the blind to come near.

Showers of snow geese. The morning sky bled them, no one else noticed or was bothered. I
covered my eyes the way I always had when I passed any accident in the street, so afraid to see

anything dead. Afraid of winter branches, rotting gardens, abandoned houses. I hummed, like
the purr of a crone panther on her rock on a dry mountain. Hummed, so the blind came nearer.

You want so badly to be seen you’d paint eyes on the lids of the blind, my ghost said. A baritone, sung between the notes of tumbling snow geese. He was my ghost, I heard him, I did what I was

told. Always so afraid to be near in any way – to what didn’t breathe. I wanted and needed to be seen
alive. Praised for being. For breathing, for not killing any enemies, for being a good girl, for being

a good woman, for becoming a knowing crone. You want so badly to be seen you would paint
eyes on the lids of the blind, the ghost had said. Yes, I mouthed. True.

My enemy had had a bad accident. The car had exploded on a curve and I crawled away. Soon,
the geese. Soon, my ghost. Soon, the rock on a slope of a sun-warm mountain and my own low

voice calling for the blind all night, until I was found holding a small white dog, my trembling
fingers stroking and stroking the lids of her chilled milk soft eyes.

I wanted to forgive something. Someone. I stroked the dog. I stroked my heart, until blindly it
broke all the way open, and one bird fell out. It was not blind. It was dead. But it hummed. 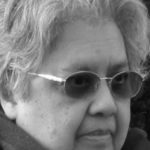 Vancouver stood across my walking.
What bones of feet had trod here, invisible now.
Bones ground in. Vanished tracks.
Who could see the city in me?
How did it manifest itself?
I pulled its hood over my head. Ghost pueblo.
This was where home yearned for me.
Searched for me in the misty rain, called and called my name
past the weathered faces that turned to pavement.
Here I paced going nowhere, bone sliding on bone.
Buried here the mockery of days. 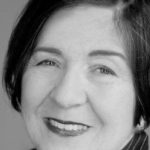 My words sputter out whenever, wherever,
crumbling particles of knowledge drifting oceans away.

Searching for the word

in rooms I have spent decades building. In this room, the verbs. In that room,
the nouns. Place names here, songs there, the names, the names … The expelling
of a word, a class of words. What was the name of that museum, that store, that street,
that singer, that vegetable, that software, that illness, that thing?

Losing my conversation. How to continue, with a key word missing? Before it goes,
I expect it to go. Silence. Why bother starting?

Searching for my mind

Lost pillow feathers. They scatter, seep out in clumps, in flecks,
in splats, in ways I can no longer say. No way to put them
back. I am a butterfly – or is it a spider – constructing
a painful web of clusters and gaps. I am.

I clutch my smartphone, inputting my life in information bits, topic by topic,
file by file, name, date, and details of family, loves, and creations,
to secure my secrets before they peter out.

High up in the Italianate villa with elephantine pillars and vaulted ceilings,
I curse locked rooms, forgotten codes, stare down
at walls of water, noun, verb plunging in.

From pink cliffs where colonies of herring gulls nest, a small black speck flares
and lunges at me screaming out in breathy wails and inflections. Then
silence. Then song. Then gliding in the air silence. I fling open
the coral windows, inhaling fresh mint breezes. 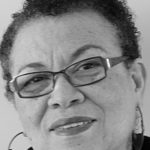 We are driven away from English Harbour,
watch the village flee into distance:
its sea-splashed coves,
its tiny island houses, some thatched,
some wearing sun-glinted, galvanized roofs,
its brown men on cane-stacked donkeys,
pickers plucking cotton and the smells of
callaloo, pepper-pot and dukanah
teasing the sweltering air.
It is the beginning of losing part of ourselves.

Father makes a heroic figure
guiding the landed plane on the runway.
We watch as its swirling fans settle into standstill.
Valises in hands, we disembark to new landscapes.

Our old island home is transformed into an idyllic realm.
Its scenes become locked-away treasure taken out
with flourish and shared at special gatherings.
Our hands dance in the valleys and hills of loud recalling.

English Harbour – a natural harbor and settlement on the island of Antigua
Callaloo, pepper-pot and dukanah – food specialties of the Caribbean 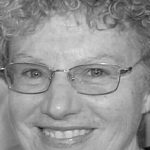 a row of red pegs
on an otherwise
empty washing line

what shall I hang there
today, to hold
my attention?

or my questions
about how to live
in the meanwhile?

in the shade
of my green umbrella
listening

to the whirl
of a dragonfly’s wings
over the duckpond 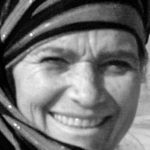 An unfinished tapestry, pushed deep into the unlocked drawer, brought unshed tears to her eyes. After her grandmother’s death, the unowned tapestry was now hers to keep or, perhaps, upkeep.

The granddaughter unjammed the drawer, unwrinkled the unvalued tapestry and tugged at it, slowly, to unravel an unloved memory.

Her grandmother had worn the hijab when she unfortuitously was forced to flee. She was unbearably young, unable to unidentify herself from the only life she had ever known.

She had untangled, untamed dreams. But in her flight, unwontedly flushed with misery, those ungratified desires were undreamt.

It was someone, unremembered, who pushed the cloth and needle into her hands. “Here, stitch and stitch and don’t look up. Unthink what you thought, unclench strings of yesterday.”

Each day when an unfed child cried, she undecorated the embroidered cake she would never eat.

When the rain unrestrainedly covered the ground, she unstitched the coat she would never wear.

When unutterable screams surged through the un-dawned day, she unclimbed the mountain she would never see.

The granddaughter cradled the unfinished tapestry in her arms. Her fingers unexpectedly pulled a thread, undoing one stitch and then another.

Unwinding undreams; for her grandmother’s true tapestry was sewn with love. 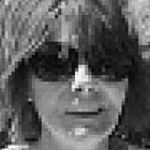 He came out of the sunset in a rush of wind,
brushing black feathery wings against my back,
sliding away into night.

With one bag and a crumpled map, I stood
and turned my back on the desert, the red rust
of a miner’s wagon and purple twilight of a town
flashing white in the beam of an oncoming train,
telling me it was just another place I could not stay.

Was it too much space that made me wild?
Cold moon rising, sky too full of signs,
black ants and snakes crossing the warm highway,
black night rising, night crazies?

Or just the crows coming out of the night filling desert
saying never mind. 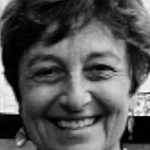 lo nora
not terrible
I hurt, but it is not
terrible

how we hurt
and it is
terrible

no we cannot
it does matter

you unfolded stiff
warrior hands
you were not afraid

we need your touch
we have lost our way 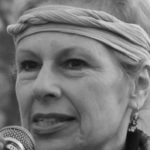 I’ve come through the voices shushing
me for years, through the underbrush
of sheket circling my feet, covering
my mouth, my eyes, past the tangle
of we don’t wash our dirty linen, past
we must speak with one voice, beyond
you have no right, you’re not Israeli,
what could you know?

My grandmother Bessie sewed rubles
into the hem of her coat, packed potatoes,
black bread, her pinochle deck, and walked
out of Russia, by herself, thirteen years old,
running from pogroms. Do you know, Francela,
she’d say to me, vot it’s like to feel homeless
in your own country?

My husband was a two-year-old kid
in Romania during the war that hunted Jews.
When we lived in Canada, and crossed the border
into the U.S., when we lived in San Diego, crossed
the border into Mexico, he’d turn to our kids
in the back seat of the car, and say, I’ll
do the talking. At the base of his neck,
he was breaking out in a sweat.

I know the gas has seeped through generations,
that this fear lives in Israel multiplied by millions.
I know we’re no longer victims, us Jews,
and you’d think we’d know how to be with power.
My thirteen-year-old granddaughter Sophie says to me,
We haven’t learned anything, Bubbe.

from Dare I Call You Cousin
Portland poet Frances Payne Adler is the author of five books: two poetry collections, Making of a Matriot (Red Hen Press) and Raising The Tents (Calyx Books); and three collaborative poetry-photography books and exhibitions that have shown in galleries and state capitol buildings across the U.S. She also co-edited Fire & Ink: An Anthology of Social Action Writing (University of Arizona Press). Adler's current work is Dare I Call You Cousin, about the Israeli-Palestinian conflict, a collaboration with Israeli artists, photographer Michal Fattal, and videographer Yossi Yacov. Adler is Professor Emerita and founder of the Creative Writing and Social Action Program at California State University Monterey Bay. She lives in Portland, Oregon.

Margo Berdeshevsky often writes in Paris. Her poetry collections are Between Soul & Stone and But a Passage in Wilderness (Sheep Meadow Press). Her illustrated stories, Beautiful Soon Enough (University of Alabama Press) received Fiction Collective Two’s Innovative Fiction Award. Other honors include the Robert H. Winner Award from the Poetry Society of America, the & Now Anthology of the Best of Innovative Writing, Pushcart Prize nominations and Pushcart “special mention” citations for works in Kenyon Review, Agni, Pleiades, Poetry International, Tupelo Quarterly, Cutthroat, Prairie Schooner, Gulf Coast, New Letters and the Academy of American Poet's Poem-for-a-day. In Europe, works appear in Poetry Review (UK), The Wolf, Europe, Siècle 21, Confluences Poétiques. Her Tsunami Notebook followed a journey to Sumatra to work in a survivors' clinic. A multi-genre novel, Vagrant, is forthcoming, and a new poetry book, Blason Pour Le Corps is waiting at the gate. Born in New York City, her “Letters from Paris” are here: http://pionline.wordpress.com/category/letters-from-paris/ and her site is at