A Bunch of Troubles

Furthering the resistance has become a regular part of my life, although I have only recently begun to fully understand what monumental stamina, patience, and determination is required. Community helps, and I am a regular participant in a newly formed grassroots organization that meets in local living rooms, church halls, and after-hours offices. We discuss immediate actions we can take, as well as long-range political strategies. We are pooling resources to support candidates, and beginning to coordinate with other groups, such as Indivisible, in order to be a more powerful and unified entity. There are many issues of concern, but I have zoomed in on electoral politics as my focus, particularly flipping districts in 2018. I have found the organization Swing Left to be very helpful in guiding us towards pivotal districts and special elections (most recently Ossoff and Quist) as well as Sister District and Flippable.

Apart from the group, I stay informed, vigilant, involved, and noisy, and try to channel my outrage constructively. I donate, make phone calls, write letters, and use social media. I subscribe to a Daily Action reminder and selectively follow through. I am fortunate in that my senators and local congressman are “blue,” but I send them messages of thanks and encouragement. Most members of Congress do not care to hear from non-constituents, but I use Twitter to write to GOP reps, most recently about the healthcare debacle, the need to investigate Trump, and their shameful lack of courage. I watch for nearby town halls and meaningful demonstrations to attend, often use my blog to address living through this unfolding nightmare, and refuse to normalize or get used to the discouraging realities. It’s the opposite of my innate optimism, but we need to be open-eyed and relentless; there’s a way of holding heartache in one hand and hope in the other, and that’s what I am striving for. I cherish my family and friends and fellow resisters. Sometimes we step back, go for a hike, have dinner together, laugh … this, too, is part of the resistance.

Every day brings a new assault on something we hold dear. Let the record show: we stood, we spoke, and we fought back.

I participated in the Women’s March Rally at Civic Plaza in Albuquerque, N.M. on January 21. The most people I have seen at the plaza at any time during the 26 years I have lived in N.M. were congregated there, showing their determination to move forward together to make a better world.

I wrote this poem after reflecting on that event and in response to a call for poets to speak their truth to the times.

It’s hard to know what goes on around the world,
in Burundi, Antarctica, Lithuania, Japan, but
I think the same game plays in all these places—
anywhere we see feminine faces.

A game of 3-Card-Monte, a constant shuffle to hide
the issues of OUR day – doors to plum jobs and boardroom
bathrooms barred, groping hands, leering lips, voices stifled,
lives lived lean in old age, after a lifetime of wages stolen.

Cards that hide the issues of OUR day – faced and numbered,
shaped and colored – cut to divert our eyes, turned to uncover
a new neighbor’s plight, so we rush to lend a helping hand,
make the best of it for us, once more.

It puts me in mind of Kay Ryan’s poem, The Best of It,
begs me ask, “Will there be a point as our acre is pared,
our garden whittled down to a bean, when we’ll look
at what’s left, realize, one more slash and we’ll die.”

Cracking pavements
to get
their full acre
restored
for they grow thin
on a bean, no matter
how full of good
works they be.

Cracking pavements
to access
health,
economic security,
representation
safety—
rights
with no gender,
rights
they already own
as full-blooded
members of the
human race.

To all of you,
Sisters, I say,
Don’t make do!
Stop marching!
Rise up!
Grab what’s yours!
Yell,
“These are OUR rights,
as much part of us
as our skin!
Would you have us
peel that off,
too?”

After 100 days of President Trump’s reign, his stack of executive orders and office appointments is bearing poisonous fruit for America and the international community. I recognize the signs of a regime that is abandoning its people, losing sight of human rights and vision for the planet. This is not the USA I have known.

Resistance is laborious, like swimming upstream. My email is flooded with petitions, requests for donations, and phone numbers to call to protest the unethical “deals” made by a president who behaves like an unprincipled car-lot salesman. Comfort comes from seeing that the ranks of the disenchanted are increasing.

My counter is simple and ordinary. I carry on signing petitions, calling Congress, and marching in protest. I join protests against the reduction of the EPA staff and the dispersing of scientific information, the defunding of education, the xenophobic policies toward Muslims as well as economic and political refugees, and new attempts to destroy a health care system. A narrow-minded political party has lost its moral authority as its votes say no to progress. I take heart watching the swell of protests that mounts up, slowly aiming to drown misguided actions.

It may be a long road; my course is not heroic. I have faith that Aesop’s tortoise will win the race. This is the time to stay persistent and steady, and to work on restoring progress and respect for life and dignity.

I live on thirty rural acres in a deep crimson state, and for the last four months, I’ve had to leave the women’s marches, the rallies at airports to welcome Muslim physicians, and the stopping on city streets to monitor white policemen giving tickets to black motorists to my three daughters in Los Angeles, Dallas, and Little Rock. While I watch David Muir’s evening news, listen to NPR and cheer on Trump’s implosion, I can, as Voltaire suggested, tend my garden. On my limestone mountain I’m limited to joining miniscule peace groups, sending small donations from my Social Security check to Democrats, forwarding petitions to Republican lawmakers, and asking my neighbors – as politely as possible – if they’d mind taking down their Confederate flags.

by Ronna Magy
The difference is,
the driver of the car
stopped by police in Huntington Park
is not white.
Is an immigrant without papers, without education,
without a license.

The difference is,
he’s not a crow who
when approached flies away,
spreading black wings to blue skies
above chromium in the ground,
above Los Angeles’ electrical power lines,
above dirty brown air
unsafe for human life.

The difference is,
the man with no papers, no education, and no license
is afraid he will be jailed.
Deported.
Police barging through his door,
taking children and wife.
Job in the Maywood factory gone.
Ugly face of the law.

The difference is,
this driver is
no longer young.
Ties to his native country severed years ago.
Flying home will take him
nowhere on a hot southern wind.

Mounting Rush No More: A Vision

I look up and I see the face of Rosa Parks! Guess What – Next to her is Gloria Steinem! Hold On! Just over Gloria’s shoulder is Elizabeth Cady Stanton with her arm around Susan B. Anthony … AND, GET THIS! Next to Susan and looking ready for anything – eyes flashing – the inimitable Elizabeth Warren! Further to the right, figuratively speaking – Hillary Clinton … Why Not?

I hear what sounds like crumbling rock: Congresswoman Barbara Lee, climbing over and shattering some old barrier in her way. Just behind her, through the tumbleweeds, come Del Martin and Phyllis Lyon, founders of Daughters of Bilitis and the first same-sex couple married at San Francisco City Hall, 2004!

Atop a bluff I see Edna St. Vincent Millay with a robust Emily Dickinson waving her arm at someone – Oh, it‘s Georgia O’Keefe, ambling over, wearing her big southwestern hat. Grinning. What’s that sound?! Amelia’s plane circling! Circling. She’s going to land! Hey! She was never lost! All this time, she’s been looking for US!

Then Margaret Sanger comes up arm in arm with Betty Friedan and – DAMN! If it’s not Eleanor Roosevelt right behind with Sojourner Truth! Next to them Jay DeFeo attacks a huge canvas, paintbrush loaded. Is that Mahalia Jackson I hear? With the one and only Malvina Reynolds! OMG!

WHOA! Who’s THAT coming along there? Molly Ivins!!! UNBELIEVABLE! This just keeps getting better!

Out the corner of my eye, striding into view, Rebecca Solnit, notebook and pen in hand – losing no time – writing Truth to Power.

Not far off, a group of women laughing, talking, marching. One with a megaphone.

We all are coming on…

We have a future and it is not set in stone!

{Catherine (Cathy) Aks has spent her professional musical life wearing many hats: soloist, professional choral singer, published composer, voice teacher, and conductor. She was privileged to be one of two conductors of Hermonics, a women’s chorus created in the wake of the 2016 presidential election. Along with colleague Courtney Birch, she conducted Hermonics in the opening ceremonies of the Women’s March on NYC on January 21, 2017. A few weeks later, outraged at the disrespectful treatment of Senator Elizabeth Warren by a fellow senator, she composed “She Was Warned” in her honor.} 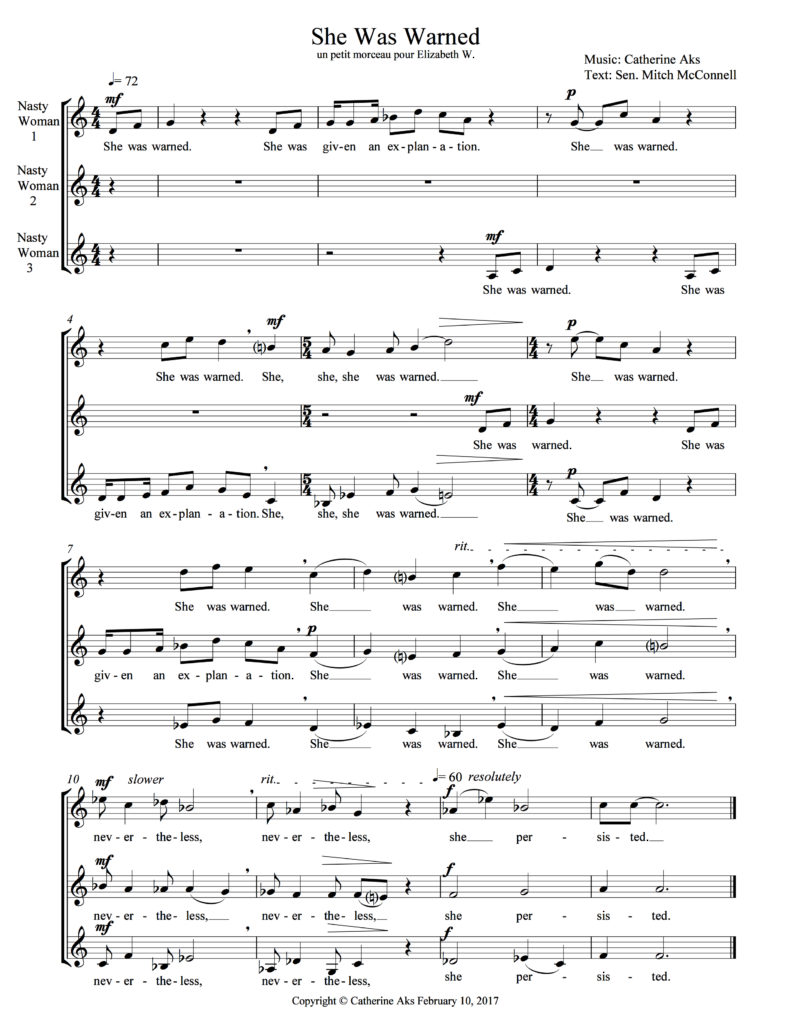 3 thoughts on “Troublemakers in Action”