A Sketch
by Carol Nadell 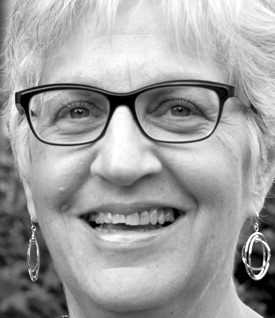 It had been six years since the open-heart surgery that was supposed to clear his clogged arteries, replace his sluggish aortic valve, and give his ailing lungs a chance to work more efficiently. Instead, he had developed serious heart arrhythmias, been outfitted with a pacemaker/defibrillator and continued the downward spiral of debilitating emphysema. There had been too many hospitalizations to count.

It had been six months since he had eaten a meal with me at our dining room table. Intractable neck pain had been added to all his other problems. No doctor, physical therapist, or acupuncturist could diagnose or alleviate the pain; the only relief came from lying in bed. He ate his meals propped up with pillows, using a tray that opened over his legs.

It had been two months since we had engaged the services of the Visiting Nurse Hospice. A nurse came periodically to check his vital signs and to prescribe any medication that was necessary. Hospice also provided the intimidating, life-saving package of morphine and syringes that was stored in our refrigerator to be opened in case of an emergency.

It had been two days since a visit by the physical therapist who we had hoped – or pretended to hope – could help him regain a modicum of strength in his legs, once muscular, sturdy, and sexy but now atrophied beyond recognition by so much time in bed. We also hoped the therapy could provide some relief for the neck pain. Neither of these outcomes was coming to pass. We told the therapist not to return.

It had been one day since he spent most of the time with his eyes closed. He spoke very little but was coherent when he did. I climbed into bed with him, needing to feel the warmth of his body and wanting him to feel mine as well.

It had been eight hours since the hospice nurse, responding to my urgent call at 1 a.m., had come to see him and assured me that he was not “in the dying zone.” It would not happen soon, she said with certainty.

It had been a half hour since I turned up the oxygen level and gave him a breathing treatment.

It had been five minutes since I last checked on him.

Author’s Comment: As my husband’s health declined, Time was a fickle presence in our lives. Cruelly, it stole from us bit by bit. Tenderly, it gave us one more day or hour together. I wrote this piece as I reflected on those contradictions. The title is a loving nod to my husband, who was known (and teased) for the slow and deliberate pace at which he did almost everything. In the end, he died as he lived – in his own time.

Carol Nadell first discovered the joy of writing in her late 60s when she overcame the jitters to join several other older women in a writing group. They wrote and shared stories of their lives, providing support and gentle critiques. Since leaving that group, Nadell has found inspiration at a Writers’ Workshop in the stillness of the West Virginia hills and at a weekly writing class in the din of New York City, her home for over five decades. After a career of writing dry corporate prose, Nadell finds personal narrative an exciting avenue for self-discovery and expression.
Next: Time Enough »
Home | Archive

3 thoughts on “In His Own Time”