A Sketch
by Ann Zimmerman 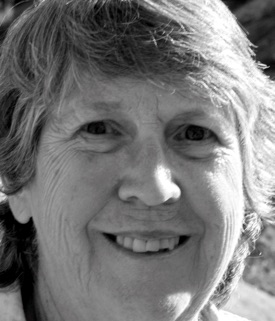 Seventy years ago they had all the time in the world. He’d come safely home from that terrible war in Europe. They had time to marry, enjoy a beautiful honeymoon in the Poconos, build a house with their own hands, start a family. Over the years, they weathered good times and bad, raised two fine children, and cherished several grandchildren.

But now, in their twilight years, he feels time slipping by more and more quickly. With each passing day, Alzheimer’s steals another bit of her away from him. She rocks endlessly and stares at nothing. No longer the university lecturer fluent in three languages, she has lost all words. And he’s become just another kindly stranger in her life.

Today the caregiver fails to arrive. He makes a bold decision. He will drive from their Bloomsburg home to the Crescent Lodge in the Poconos. He will show her, once again, that magical place where their great love began.

They’ve rescinded his driver’s license because macular degeneration impairs his vision. But he will just drive very carefully.

After wheeling her down the ramp, he helps her into the car. As they drive along Interstate 80, he chats about the scenery. She sits contentedly, watches through her window, and hums happily. He knows that car rides calm and entertain her. But the caregivers transport them only to medical appointments.

As they travel, he reminds her of their honeymoon and the wonderful time they spent in the Poconos. He talks about their walks and picnics in the woods, the romantic dinners, and row boating on Tobyhanna Lake. She does not respond.

When he turns off the main highway, he worries about his memory. It has been so many years, but he thinks he can find the way.

After several wrong turns and backtracks, he finally spies the Crescent Lodge on the left. He points and waves his hand excitedly. She glances at the old building.

Then she turns slowly toward him with a smile he’s not seen in years. With her unused voice she croaks, “Love you.”

His chest tightens and he barely breathes as he hears those words. Tears blur his failing vision. It is the best of times.

When he looks back at the road, the huge tree looms directly in front of them. His reflexes are far too slow to swerve. He has one final thought: “together again.”

Author’s Comment: The impetus for my piece came from my parents.  They married in 1946 after my dad returned from World War II. They honeymooned at Niagara Falls, not the Poconos. My mother, who is 91, now suffers from Alzheimer’s. However, she has not yet reached the non-communicative stage. For several years, my father attempted to care for Mom on his own. During that time he continued to drive, while my brother and I worried about a fatal accident.  He was finally forced to stop driving after a fall impaired his vision so badly that his license was revoked. Fortunately, unlike my story character, Dad did not try to drive after that. He passed away last summer at the age of 96. Because of Mom’s impaired memory and time sense, she does not continually mourn her loss. She seems to think Dad has just gone out for a bit and will be back shortly. My feeling about this story is that what seems to be a tragedy (an elderly couple dying in an accident) can very well be seen as a blessing. When two people have loved each other for as long as my parents have, for one to be left alone seems like a greater tragedy than for both to pass at the same time.

Retired from her job as an electrician at the Coors Brewery, Ann Zimmerman devotes her time to writing, photography, hiking, skiing, golf, traveling, and grandchildren. She lives in Colorado with her wife and two spoiled cats. Zimmerman has published flash fiction on Long Story Short, Spelk, Smokelong Quarterly, Antipodean SF, and elsewhere. Her nonfiction work has appeared in Colorado Outdoors, Colorado Woman Digest, Denver Post Voices, Grit, Rocky Mountain Sports, Skin Diver, and more; her photography has been published in AAA Encompass Magazine, Mother Earth News, and several calendars. https://annzimmermanblog.wordpress.com
Next: It Doesn’t Matter What You Say. Babies Just Like the Sound of Your Voice »
Home | Archive