As guest editor of the summer 2018 western poets issue of Persimmon Tree, I’ve taken pleasure in reading over 180 poems. Submissions ranged from pure, embryonic language-seeds to fully shaped, spacious, and magical vessels. I’ve chosen eleven that most move me. Their voices, topics, emotions, and images vary wildly. Yet for me, as a reader, I sense emerging from each one what Maxine Kumin has called “the order, the marvelous informing order.”  Each of the poems I’ve picked for this issue delights me with words “as pleasing to the ear as the meanings are to the mind,” to paraphrase Marianne Moore, as well as form that “is the bodying forth,” as Mary Caroline Richards says in Centering in Pottery, Poetry, and the Person.I hope you enjoy reading them as much as I have. With thanks. 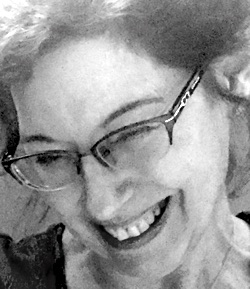 A few leaves yellow into the shadow
of yellow. The crown flutters, stem bends
to a wind that butterflies thin lamina
from Cherries and Big Leaf Maples amassed

on the grounds over years. Generations
have passed here, this house has borne other children.
Holes in stucco’d walls bear witness to gates
husbanded to the top of the staircase.

And will I take a leaf out of this new
book, this slender, silvered newcomer?
How begin again in crinkled tissue-

paper body whose skin bears the hues
of age? I hear the wind. I remember
a life lived. Its fresh, rich mulch. Its fat root. 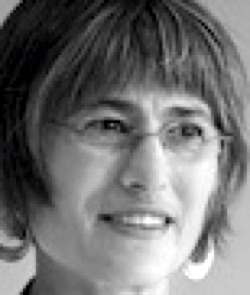 Fire in the Ice

I train my muscles to the trail, cache fear
under Lodgepole pine and cedar trees, strain
my eyes toward meadows, long views of Mt. Rainier,
its tonic of heft, no need to explain
these edgy worries: disappearing snow, spears
of lightning burning my western terrain,
sage, grass, grouse and house unspared, and cancer
spreading like a glacier in my sister’s
bones. Down the scoured valley, I sling laments
and howls, swallowed by the river’s pockets
of booming bass tones and surging boulders
that urge my lips toward the sweat-sweet intent
of kissing each blistered pain, each unlocked
moment, letting them go without refrain. 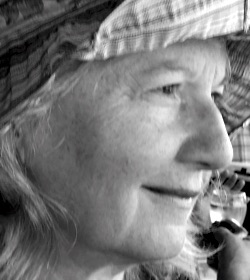 That autumn night at my mother’s small apartment
I’d been tossing all night on the narrow daybed
in her alcove room. She came to the doorway
in her blue nightgown, asked if I was all right.
I can’t sleep, I said, sitting up.
Would you, she asked, tentatively,
almost politely, would you like to lie down
on my bed … on one side of my bed?
She carefully chose her words, did not say
beside me, or with me.  Quickly, before
I thought or felt what I wish now
I’d thought or felt: Oh no, I said.
No. I’ll be fine.
She backed away.
OK, she said, turning to her room.

And she was gone, and there never
came another chance
to lie beside my mother
in this life. 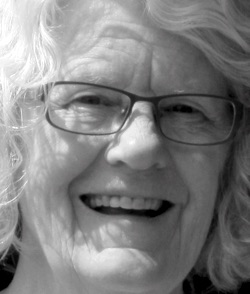 The audiologist, both business-like
and kind, speaks softly though a siren blows
outside her office as we listen to the wind
in nearby trees and hear the dump-trucks bang.
My brain starts racing like an engine’s sputter
when she tells me I need hearing aids.
She’s far ahead of where my thinking’s caught
still clinging to a carefree, youthful tale.
I know that I’ll hear laughter, players shouting,
fiddlers tuning, singing on the green.
I’ll know when the kettle whistles, hear
the back door banging, know if friends
come calling, keep confusion far away,
but I’ve heard more than I can hold today. 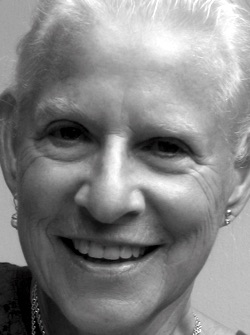 My Husband Has Atrial Fibrillation

Although you will die someday,
tonight your chest rises and falls evenly between our warm sheets.

Although you will die,
the curly hairs of your chest where they placed the electrodes
still swirl like the symmetrical patterns of magnetized iron filings.

Although you will die,
a soft mist moves over our house
just as it did when there was nothing here but forest,

and I welcome you daily
as the big-eyed birds welcome the false dawn.

Although
you spend a precious hour and a half every single Sunday morning
reading the entire Oregonian newspaper
and most especially the funnies,
where you giggle out loud and, comic strip by comic strip,
you keep on summoning me back to the dining room table to look,
while I’m busy trying
to get something else done, 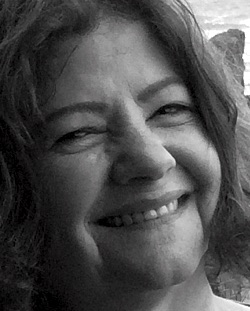 The Christmas tree, stripped of lights and star,
hulks against the early dawn window.

The Solstice is the shortest day, but not the latest sunrise
of the year. In order: earliest sunset,
winter solstice, latest sunrise.

The ascending accelerating song
of the golden-crowned kinglet
is the first birdsong we cease hearing
as we age.

The statue of the Virgin of Hope in Sevilla knows
everything about us; we have been telling
her our sorrows for centuries.

The first mirrors were pools
of dark still water collected in a vessel.

I start the morning coffee water to boil.
There is no one here
the creaking floor will wake. 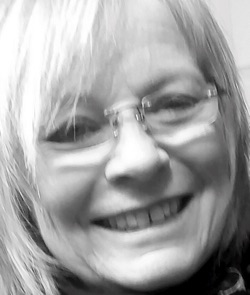 The polar vortex howls on the weather channel today.
How many will be frozen by the weatherman’s report?
It isn’t easy to ignore what news-terrorists say;
even I imagine they think of weather like a sport.
Bracing the storm with a microphone and no umbrella.
Slashed by slanted snow, glazed with ice, hat caught in the vortex,
“Am I on yet?” he screams into the wind’s a cappella
white wail. White noise, like the snowstorm, white like the icy hex,
terror-making face and words white-spilling from the TV.
I don’t watch the weather channel. I read seed catalogues.
Everyone has been frozen by this winter except me.
I ignore the acceptance of this icy pedagogue.
Like the snowstorm, I need no microphone to call for spring,
but she’s not on yet since no birds are left here that can sing. 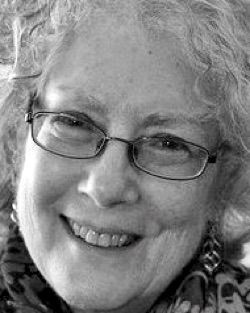 They stare from under stiff
cornettes of palest yellow:
seven starched peculiar
blossoms perched like brides
on sprung wire stalks; a clutch
of curious faces, puffed cheeks
red from huffing fervent
prayers; a bound bouquet
of consecrated beauties;
a paean to pure perfection,
intolerant of warmth or light.

For weeks they’ve watched me
read the news and sip sweet tea.
Now, their fading bonnets
looser, they nod. They know
how very far I am from God. 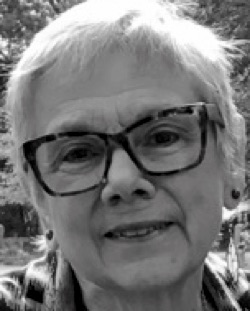 Under the Babylonian Willow

Trees in her life had not been personal
until her father cut a branch and she became
the Babylonian wearing the willow.
He knows not what he does, the priest intoned. Do not blame.

She grew afraid of forgiveness. She found
libraries where she discovered deciduous –
that state of shedding and wait – daughter cells and
cambium layers, heartwood. She learned how trees hush

around strangers, wedge cracks in the sidewalk.
Felled by the wind, they grow into nurse logs.
They dance on one leg, their crowns brushing sky – hawks,
robins, crows in their branches in full sun or fog.

On hillsides, in valleys – Ginkgo. Hazelnut. Pine. Aspen.
She watched for nimbuses. She prayed for baptism. 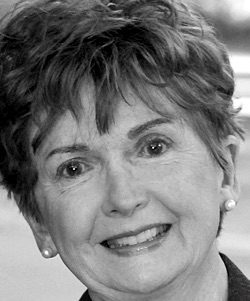 Eight hundred pounds of granite
dust-gray, smooth as river rock
hillock of wild oats
cresting massive shoulders,
tests the rim of the divide.
Sensing peril, obsidian heels pull back
before the rimrock starts to give.

Withered cliffs of ancient
dun and buckskin
barrel down a ravine
with the roar of a hundred cannons,
scree clattering in the tail,
kicking up dust until the last chestnut
rolls into a nickering stream. 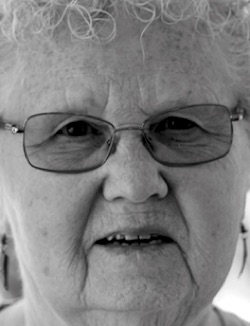 Toward night time, while the surf-foam gently holds the light
Until it softens and fades and slowly forms a tender edge.

Far off above the new horizon patches of lingering light
Contrast with surf-line, now become a darker edge

While I, reluctant to see this wind-blown sea-day’s end,
Would stay the movement toward the western edge. 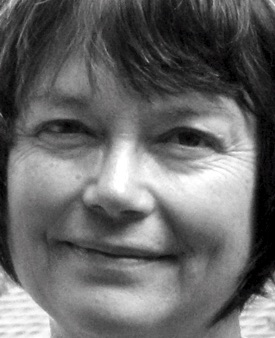 to squall freely in the guest cottage eaves.
Such a brief-winged architecture here! Festooned

with nets of light embracing me in dun
shadow. My retinas snap with every sharp

whetstone-sparked whistle. What am I doing
here? The company manager intones

From this window I can see indentured
field workers bend and rise, fourteen, fifteen

hours a day, seven days a week, women
and children alongside the men. Trenching

the bromeliads. Another migraine stabs
my eyelids. Trumpet vine, hibiscus, and bright

lipped acanthus spike the recoiling air.
If only I could find a breakwater

edging the rough surf, a quiet bluff where
I might unfold my easel, plant my feet—