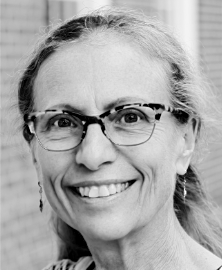 Aunt Phyllis is ticking off entrees on the Meals on Wheels menu for the month of May that she won’t eat: Fettuccine Alfredo, Chicken Tetrazzini, anything with rice, and baked fish, though she sure wouldn’t say no to batter-dipped catfish fried a crispy golden brown. When we hear a crash in the basement, she pauses a moment before returning to her task. Minutes later, Uncle Dick staggers through the kitchen and into the dining room carrying a cardboard box filled with fishing tackle. Suddenly, he tilts to his right and his left leg leaves the floor. I grab the box from him, and he rights himself. He slides into his recliner, exhausted. No one mentions his loss of balance.

I place the box on the living room floor and sit beside it. In a smaller box within, I find bright, hooked gadgets with names like Super Snooper, Itsaduzzy, and Tadpolly Spook, each in its original box or tube. “How old is this stuff?” I ask.

“Some of them lures was Bob’s.” Dick’s brother died when he was nineteen and my father was eight. That was in 1940. “Take them to your son,” he says.

“You sure?” Of course he is. A mere minnow hanging from the end of my frail, 93-year-old uncle’s fishing pole would pull him into the Mississippi. I open a box that once held Emerson Diplomats at a time when a cigar cost six cents. Within are hooked wire contraptions, some homemade, each wrapped in a neatly folded paper towel. I hold up a red and silver shield, hung with three wicked-looking hooks and a clump of tan bristles. How could a creature be so enticed by these flutters, flashes, and colors that it would willingly swallow a hook?

My taciturn uncle, the man who hands the telephone to my aunt when I call so that he can talk to me through her rather than directly, tells me that in the spring and autumn when the fish move into shallow water, he uses topwater lures like waddlers, poppers, and fizzers. In the summer when the fish move to deeper water, he uses jigworms, jigging spoons, bucktail jigs, and others with names that dance. Some lures work better in colder water where the fish are less active, while others work better in warmer water where fish metabolism is revved up so they feed more readily. Water clarity also figures in to one’s choice of lures. I hadn’t realized there was such a science to using dazzle to catch one’s prey.

As my aunt and uncle try to decide whether, for one of their lunches next month, they should have the braised liver and onions delivered to the house or if Dick should run down to the senior center and pick up beef patties, the dine-in option, I remove the Hula Popper from its box. With its white plastic, torpedo-shaped body, red froggish head, gaping mouth, and rolly black eyes, the Popper reminds me of a bathtub toy, except that it has a red and white tassel for a tail and a pair of triple hooks hanging from its belly. To the bass, this lure is a bright, flirtatious frog. The directions printed on the side of the box advise that if I want an unfair advantage over the “disorganized bass,” I should alternate between “little pops” and  “short quick jerks” and then allow the line to slacken between movements so that the hula skirt has time “to wiggle and squirm.”

As I open a metal box filled with wood, cork, and plastic bobbers, the discussion about liver and beef patties becomes a squabble about who should die first, and I missed the swift transition. “You can’t take care of yourself,” Phyllis charges. “

“Well, you can’t either!” Dick retorts.

My 91-year-old aunt hasn’t stood up straight for years and can barely walk even with a walker. Often, she doesn’t reach the toilet in time but refuses to set a commode near her recliner. Now, my extroverted aunt only leaves the house for medical appointments. My uncle isn’t worried about his “little” heart attack, his PSA levels, or the cancers the doctor freezes or shaves off his face. He only worries about his legs, which are weak. Still, he washes dishes and refills his wife’s coffee cup, something I never thought I’d see, and grocery shops alone, zipping around Hy-Vee in a motorized cart with his reacher-grabber tool. But apparently, he can’t figure out how to eat without his wife’s supervision. “Eat your soup first,” she directs. “Scrape off that tartar sauce: it has pickles in it.”

“If you go first, I’ll sell the house and move to a nursing home,” Phyllis says with irritation. “But if I go first, you’ll just sit here alone.” How practical and unsentimental she is about these end-of-life matters. They watch me open a box of reels. I’m about to mention again how much easier life would be for them in an assisted living facility when my aunt speaks. “I’ll order us the liver.  You can have mine, and I’ll eat cereal.” Dick nods.

Perhaps in his daydreams, my uncle stands on strong, steady legs next to Bob as he jerks the Hula Popper across the water. Or he, his supple wife, and the child they never had are reeling in fish they’ll sell to other good Catholics during Lent. Or he returns to the early years following his retirement from the post office, when it felt right to spend all morning on the river, not caring, really, if he caught anything. Or perhaps he’s drifting in shallow waters. When he sees a pop and a flutter, he gulps at the movement. Instead of running for deep water, he pulls hard to set the hook, and waits to be lifted, writhing and glistening, from the water, cleanly unhooked, and left gasping and drying on the shore.

Once or twice a year, I make the 360-mile drive back to my hometown of Burlington, Iowa, to visit my father’s brother and his wife. Sitting in their living room with them is a remarkably comforting experience, since they’ve lived in the same house for at least 70 years, and all of the furniture is in the same place as it was when I was a small child. And yet, every time I visit them, I’m surprised by something I see or hear. Usually after I return home, I write a flash essay to capture and commemorate the experience. “Lure” is one of those essays.

Lisa Knopp is the author of six books of creative nonfiction. Her most recent, Bread: A Memoir of Hunger, explores, through research and personal story, eating disorders and disordered eating among older women. Knopp's essays have appeared in numerous journals, including Georgia Review, Seneca Review, Missouri Review, Prairie Schooner, Iowa Review, Gettysburg Review, Shenandoah, Creative Nonfiction, and Brevity. Seven were listed as notable essays in the Best American Essays series. Currently, she’s completing a memoir, From Your Friend, Carey Dean: Letters from Nebraska’s Death Row. Knopp is a Professor of English at the University of Nebraska-Omaha, where she teaches courses in creative nonfiction.
Next: The High Note »
Home | Archive