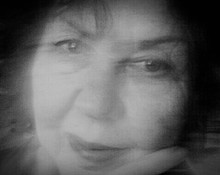 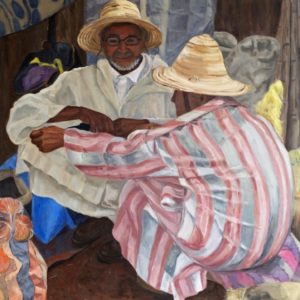 Black doesn’t disguise white skin and solitary stance, but it allows me passage in this realm of Islam.

Sun moves to the other side of the car. The train stops for passengers. Few ride this first-class car – mostly men. Down the aisle an old man takes a seat. The old woman with him doesn’t.

She comes toward me. Wisps of glorious white hair escape a loose mantle of yellow silk sefsari that wraps her small regal body. Surely temple maidens will appear to scatter scented petals before her.

“Hello.” I say with relish.

She slips into my double seat. Small smile, puts a finger to her lips, shakes her head slightly. She doesn’t know English.

Pearls encircle her neck. Below, another necklace of golden beads and rock crystal. Circlets of wide gold around each wrist. Tiny brown fingers ringed with emerald, opal, and sapphire.

We sit knee to knee. She like a Phoenician queen in shimmering armor. Me a white woman armored in black. Free-minded spirits both.

From the train platform I see queenly jeweled fingers wave in the dim-lit high window. I think of Jezebel, Phoenician princess, Goddess of Baal, Queen of Israel. The plight of Jezebel in that kingdom of Jesus – slander evermore for worship of Baal. I wonder how my queenly sister holds herself above the all-encompassing Allah.

Thousands of days won’t bring so singular a sight as this dazzling interloper. The train pulls out. Red caboose lights disappear.

The stationhouse is shuttered. Two men shuffle out of blackness onto the platform. Nod at me. Talk to each other. Sharp flat Arabic. I interject ‘hotel’ several times. I’m ignored.

One of them motions me to a taxi. I hope it’s a taxi.

What is most important about the story is the intimate connection made by two strong women without the common bond of culture or language.

Susan Gene McCartney was born in Montana. A world traveler, she follows her heart to enrich her life. In New York City, she studied acting and playwriting at the Ensemble Studio Theatre. Her play The Freak Show was produced in New York. In Belize she founded Placencia Children’s Theatre Company. At 64 she traveled to fourteen African countries in two years via local transportation. She taught English to Swahili boys in Tanzania. She is now writing stories about her two years in Africa and hopes to publish a collection in the future.
Home | Archive | Issue: Summer 2020
Next: Playful in Buenos Aires »

2 Comments on “Train to Tozeur”