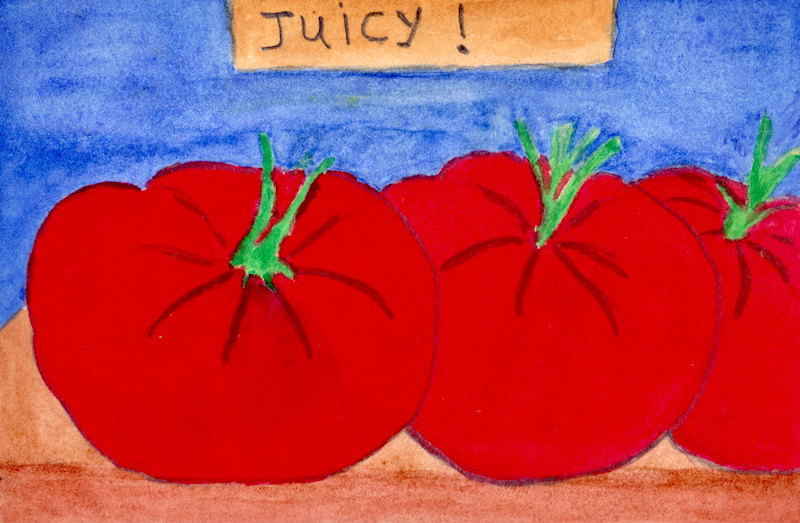 Juicy, painting by Mary Beth O’Connor
Even though I’m an 84-year-old woman in the bloom of Medicare, my datebook is as full as a debutante’s dance card.  I’m seeing Serge on Monday, Andrew on Tuesday, and Mike on Thursday. It’s a rare week that I’m not seeing someone. I date only male doctors and only on weekdays, although never on Wednesdays.  Wednesdays they save for golf.

When I was in my sixties and seventies, I used to think of the occasional visit to a doctor as a pro forma stop in my otherwise fast-forward life — time to have my teeth cleaned, my lungs listened to, my reflexes tested, or my pap smeared.

No more. Now that I’m in my eighties, even though there is, knock on wood, nothing seriously wrong with me, I am seeing doctors with greater frequency and having the time of my life. By thinking of these appointments as dates – the initial ones as blind dates and subsequent follow-up visits as “getting serious” or even “going steady”– I have been able to change my attitude entirely about the otherwise unpleasant and inevitable fact that I am falling apart.

Finding “Doctor Right” is a challenge for women who are new to the doctor-dating game.

Don’t be embarrassed to ask around. Check him out on the Internet. Talk to friends who’ve dated him. Were they satisfied? Would they date him again? Ask the tough questions: Is he available or does he play hard to get?  When you finally get together, is he in too much of a rush? I once dated a doctor who was in and out in two and one-half minutes, and all the time his hand was on the doorknob. I dumped that one after the first date.

That it is up to me to initiate every relationship runs counter to my romantic ideal – that he should pursue me. My mother was very particular on this point. My dates had to come to the door to pick me up; she would not let me respond to the honk of a car horn. Even when he did ring the doorbell, even when the poor guy was standing in the hallway mauling my wrist gardenia in his nervous hands, and even after she called upstairs to me that he had arrived, I was under orders to “keep him waiting.” I was not to appear too eager.

Happily, with doctors, the roles reverse after the first date and it is he who says, “I want to see you again.”  In fact, so eager is he to see me, so fearful that I might stand him up, that he has his receptionist call the day before to make sure I’m coming.

Anticipation is a big part of the fun. Before each date I bathe, shave, shampoo, blow-dry, and apply my make-up with care. What shall I wear?  Since all of these are daytime dates, I tend to dress and accessorize casually, but with an eye to making an attractive impression. A little perfume at the pulse points? Why not? I pay special attention to my underwear. Dating doctors often involves undressing. Of course, he slips out of the room while I change into my paper negligee, but still, when he comes back in – I love that he knocks for permission — he might catch a glimpse of my lace undies that I’ve draped on the chair.

I have a surprisingly meaningful relationship with Mike, my dentist, considering that we can speak only rarely and I’m fully dressed. That’s because Mike only has eyes for teeth. Mine, especially. He compliments me on my plump pink gums. (He has a thing for dental hygiene, so I brush and floss vigorously before I see him.) And I don’t put on any lipstick – he’d only smear it.

I love it when he touches my lips with his fingers, and then, gently yet firmly, probes my mouth.

We share a moment of intimacy as I listen to his stomach gurgle.

I love the way he says, “decay.” Such passion! But when he talks to me, he is all tenderness. He doesn’t say, “The reason that cold drinks hurt your teeth is because you’re old. Gums recede in old age and yours are down to the dentin.” Instead, he says, “No wonder you are experiencing some discomfort. You have sensitive tubercules in your mouth,” and then he gives me a gift of toothpaste for sensitive people. We agree to meet again in three months.

I’m probably closest to Jeffrey, my ophthalmologist. He guides me to his examining chair and then rolls his stool so close to me that I can feel his breath brushing my cheeks.  He looks into my eyes. “Wonderful,” he says. “You’re completely dilated.” And then we do the “look up” “look down” thing.

But if I had to pick a favorite it would be my internist, Dr. Rick – that’s what he likes me to call him. He also likes to tell me that he wouldn’t let me swallow any pill or submit to any treatment that he wouldn’t give to his wife. Now we’re not just dating. We’re committing adultery. Like all doctors, Dr. Rick is brazenly unfaithful. While I’m waiting, expectant and vulnerable, my legs hanging off the side of the examining table, he’s engaged in flagrant speed-dating, darting from room to room like a lover in a French bedroom farce.

But when at last he appears, draws the curtain closed behind him, and opens my computer file, I finally have him all to myself. He rests his fingers on my wrist.  He wants to know everything about me. He speaks in an ardent rush of words that make me dizzy with anticipation.

“Any chills or fever?”

On and on he speeds, racing to the finish.

To all of his questions I answer, demurely, “No.” Doctors aren’t the only ones who know how to play hard to get. Our happiest times, though, are when there actually is something wrong with me. It’s then that he says the words I’ve been longing to hear: “You have a condition. You need a procedure.” A procedure! He’s going to give me a procedure! And then I wonder…  does he say that to all the girls?

Of course, my gynecologist is a woman.

If this essay spoke to your condition, try “Traveling While Married,” and my best-seller, My (Middle-aged Baby Book) which made Erma Bombeck laugh out loud.

Mary-Lou Weisman started her nonfiction writing career as a journalist for a local newspaper, then as an essayist and feature writer for The New York Times, The Atlantic, and other national magazines. She has taught memoir and personal essay writing as an adjunct professor at The New School and currently at our local library. Ultimately she abandoned magazine writing in favor of writing books. She thinks of herself primarily as a satirist, although two of her five published books are as serious as she knows how to be. www.marylouweisman.com

Mary Beth O’Connor is a writer and painter whose fiction has recently appeared in Persimmon Tree. Her writings have been published in Minerva Rising, The Healing Muse, Blueline, and others. She illustrated her elderly friend’s book of poems Food for Thought, and has written and illustrated three children’s books.

Next: The Bridge »
Home | Archive