The Supreme Court v. American Democracy
by Margaret E. Wagner and the Editors of Persimmon Tree 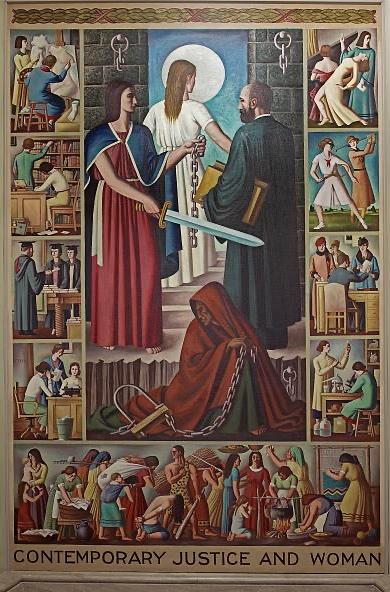 “Contemporary Justice and Woman.”
Oil painting by Emil Bisttram for the U.S. Department of Justice, 1937.
Photograph by Carol Highsmith.

In spring 2013, Persimmon Tree published an essay by Elizabeth Zimmer. “North Wing: A Cautionary Tale with Poems by Dead White Men” details the harrowing personal experiences of the author during and after her abortion in 1966, before the 1973 Roe v. Wade decision finally recognized the right of American women to control our own bodies. We urge you to visit our archives and re-read this essay as a potent reminder of what lies ahead for women across this country in the wake of the June 24 Dobbs v. Jackson decision severely restricting Roe.

Dobbs is only one of several recent Supreme Court decisions that must be of concern to all those wishing to preserve this nation’s representative democracy. On June 21, Vega v. Tekoh weakened the Miranda protections against overbearing police and prosecutors, and Carson v. Makin took a major step toward weakening the separation between church and state that is one of this nation’s founding principles. On June 23 — the day the U.S. Senate passed long-overdue, if insufficient, gun-control legislation in the wake of the most recent mass shootings in Buffalo and Uvalde — the Supreme Court issued its decision in NYSRPA v. Bruen severely restricting a century-old New York State law requiring the licensing of guns carried outside the home.

Operating at its best and most effective, American democracy seeks to protect the rights of all its citizens, pursuing this goal via carefully considered compromises among those of opposing beliefs. In these recent decisions, however, the ideologically driven conservative majority seems determined to align the Court, designed to be the last bastion of legal objectivity, with an equally ideological minority of Americans seeking to usher the United States into a dangerous and destructive Age of Intolerance.

This is a time for action and constructive reaction. Voting is essential. Those who have time and means can also volunteer and/or donate to the many organizations devoted to protecting a tolerant and compassionate United States. Peaceful demonstrations are helpful too. If nothing else, they bring us into the circle of those who can offer even more ideas about how to combat the increasing politicization of the Court. And we can marshal prose, poetry, music, and the visual arts in support of equality, tolerance, and compassion. This might be the most effective role that we, the editors of Persimmon Tree, can play — and we pledge ourselves to do so.

We are now officially in a post-Roe era. As Elizabeth Zimmer wrote at the conclusion of her essay describing events before Roe: “These are bad times…. All we can do is continue, keep our eyes open, and remember that all politics is personal. Let’s go.”

Next: From the Editor »
Home | Archive