The Third Chakra at Gate 26
by Jude Reese 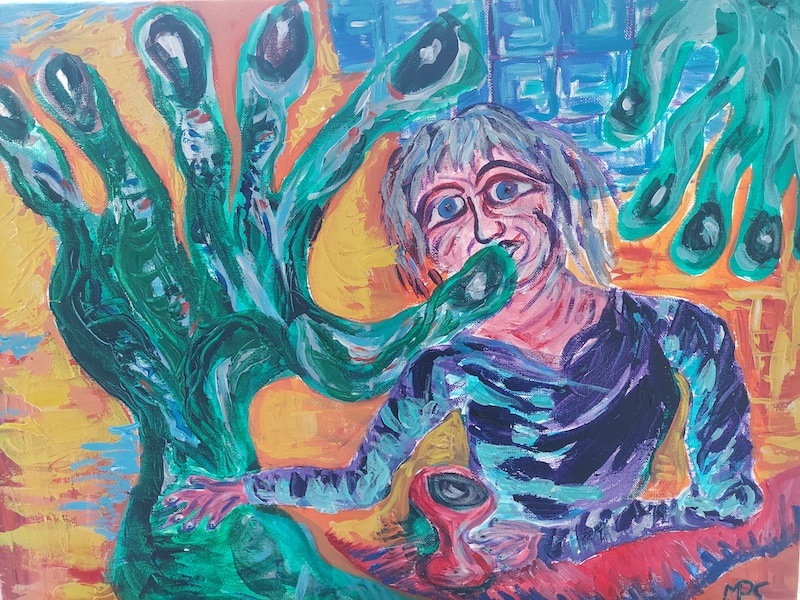 This world is white no longer,
And it will never be white again
James Baldwin, Stranger in the Village, 1953
Frank led from his belly, the right leg headed forward pulling the back leg stiffly in syncopation. His gout was acting up again, shooting through his Florsheims. His gait slowed, and he felt the weight of his American Tourister cutting into his shoulder. No need to pay for checking a goddamn suitcase. His red-and-blue plaid shirt cut into his girth, and the bronze eagle on his belt buckle pecked his stomach.

Making his way down the concourse, Frank stopped to wipe his forehead and pulled his boarding pass from his shirt pocket. Gate 26. He wouldn’t admit he was afraid to fly — that helpless feeling at 35,000 feet. Turbulence and hijackers, geese and passenger rage forcing emergency landings.  And now all those suicidal, jackass pilots and mechanical malfunctions. I can do this. You’re all right, Frank. Nothin’ to this.

At Peet’s Coffee, pretending to study the pastries in the case, he stopped to catch his breath and felt sweat form under his baseball cap. Redness crept up his neck. Damn blood pressure. His eyes took in the customers waiting in line.  Dark hair, dark skin, dark eyes.  All of them. A woman in a pale green sari, a jewel in her forehead, ordered a Chai. Her husband, in a long cream-colored jacket, joked with the clerk in heavily accented English. Nobody has worn a Nehru jacket since Ringo Starr.

Frank navigated through waves of fellow travelers, careening into an African-American family who had changed directions abruptly. The youngest child, a girl of perhaps three, dropped her small suitcase, spilling toddler underwear and beach clothes at Frank’s feet. Clutching a stuffed unicorn and burying her head into her mother’s leg, the child started to sob. The father began an apology, but Frank skirted past.

At the next gate, Frank lowered himself into the first empty seat to rest. Gate 24. No need to hurry. Plenty of time. Outside the Oakland sky seemed heavy. His suitcase bumped his knee. Tattered, his wife Laverne had called it. Functional, he had retorted.

A woman behind the desk was speaking into a microphone. “Flight 876 for San Diego will be boarding in 20 minutes.” San Diego. Never been. Maybe Laverne would like to go to a Padres game. Road trip in the summer. His eyes surveyed the crowded waiting room teeming with passengers eager to board. The caramel-skinned woman next to him, engrossed in a paperback, moved her purse closer to her seat, avoiding his gaze. Across the aisle, a mother sang softly in Spanish to the crying infant cradled on her shoulder. Her husband chased a boy of about five, who had become an imaginary fighter pilot on a mission, through the crowded aisles. Too many children. Probably on the dole. “Ándale! Ándale!” the father shouted. Two prepubescent boys sulked in their seats. “Es un churro,” the older laughed, pointing at Frank. The mother turned with a reprimand. I never did like the Padres anyway.

Frank rose and perused the concourse before aiming toward his gate. He was mildly aware of a cacophony of languages. God, these people. Why don’t they learn English? What is this, the United Nations?  Just yesterday, his granddaughter Jessica — now she wanted him to call her “Jessie” — had said to his face that in the modern world everyone should marry someone of another race. “Protect recessive genes,” he had responded.

Why had he agreed to come out to California to help her? Seems it was always in the news for mass transit shootings or radical protest marches.  And Oakland, with its Chinatown open-air markets, trucks double-parking to unload vegetables and fruit. Why had Laverne arranged for him to spend two weeks at Jessie’s overpriced Victorian in the East Bay? Berkeley of all places. Moscow-by-the-Sea, he had told Laverne. Couldn’t that husband of hers fix the fence? No, he was an intellectual too, couldn’t work with his hands. Surely she could have found someone else to install new cabinets. Retired old fart. Granddad with time and tools. Laverne had told him it would give them a chance to bond. Do I really need that touchy feely crap at my age? And what was that story Jessie had read to him over take-out kimchi, laughing until tears came to her eyes? That guy Vonnegut, of course. Something about the future when everybody’s equal. English professors! Why couldn’t she stay at Iowa State?

At a newsstand Frank picked up a water bottle for the plane. Approaching the counter, he spied a solitary loaf of San Francisco sourdough, a lone survivor in an otherwise empty bin. Something for Laverne. The woman at the register, small with graying black hair, dark skin and dark eyes, greeted Frank politely, rounding each syllable in what he vaguely recognized as English.

“Is this fresh? From today?” he asked.

“No.  Bing them only every trreee days.” Sensing Frank was puzzled, the woman smiled and shook her head to indicate she had answered in the negative.

“Don’t jury,” the woman responded. “I put it vack.” Frank tipped his head in his own characteristic attempt at politeness and left the store, forgetting the water bottle.

At the Burger King, he maneuvered his bag to the counter.  He stared at the teenage clerk’s nametag — “Alejandro”— and at the spacers in the boy’s earlobes. Some throwback to tribal ritual. Frank felt his face register disapproval.

“What can I get you?” The youth seemed distracted by his pal working behind him dipping fries and splattering grease onto his apron. “Merde,” the coworker said and backed up. The two laughed.

“Double cheeseburger and fries, no tomato.”

Lunch-in-a-sack and carry-on in tow, Frank made his way to what seemed to be the only empty spot. As he began to eat, part of an over-ripe tomato and some suspicious juice — maybe from watery mayonnaise —  slid from the bun and onto his slacks.  Frank looked up at the youth at the register. “On purpose,” he said aloud to no one. Let it go.  Let it be.  Laverne had coached him on ways to keep his blood pressure at bay.

A thirty-something blonde woman in a gray pantsuit and black pumps approached the table. “May I join you? The place is crazy full.” Frank nodded, wiping mayonnaise from his pants as the woman arranged her salad on the table. She wheeled an ebony leather valise to the end of the table, sat across from Frank, and hung an oversized beige purse on the back of her chair. After removing the plastic from her salad, she pulled a laptop from her valise and a slim cell phone from her purse.

“Would you mind if I did a little business on my cell?” She did not wait for an answer. Frank shook his head, wiping away the Thousand Island dressing he had discovered on his shirt.  He finished his meal, uncomfortable from eavesdropping on half of a pharmaceutical conversation, and removed his tray and bag. Your place is in the home.  The woman acknowledged his departure with a nod and continued her sales pitch.

At Gate 26, he looked for a seat where he would feel safe. The waiting area was nearly full, but wielding his carry-on, he fought his way to  a chair close to the counter.  Across from him a man with a dark beard talked on his cell phone in some unrecognizable speech. Probably a jihadist. Next some woman wearing one of those burkas will ask me for my seat and try to sip a latte under her veil. Behind him he could hear a young couple conversing in what he thought was Mandarin. He could hear the rapid clicking as their thumbs tapped their cell phones, texting to the rhythm of their modulated voices. On the floor near the window, a group of dark-skinned teenage boys surrounded by green-and-red soccer duffles each embroidered with a jaguar in black, played games on cell phones, while an older man, obviously their coach, spoke to them in Spanish as he handed out boarding passes.

Suddenly Frank felt all alone. On the wrong side of history. The last white man in America.  Not like back in Cedar Rapids. He wished Laverne had come with him. Out the window heavy, gray clouds had given way to rain. A plane taxied toward Gate 26.

A short, dark man in a tailored navy suit wheeling a compact suitcase approached the desk. “Captain Avakhshiaea,” he heard the agent greet the man with affection. “You have a full plane.”

“The Third Chakra” is a satiric piece, but hopefully sympathetic as well.  I used to have my high school students listen to Vonnegut reading his story “Harrison Bergeron”: “The year was 2081, and everybody was finally equal.” That may have been the inspiration for my tale.  The Oakland Airport also provided a muse.  The third chakra is the site of personal power, the site of our sense of our place in the world.  When it is “blocked,” we feel powerless. That suggested the character having to confront the realities of our changing demographics as represented by the diversity at the airport.

Judith (Jude) Reese has been a freelance writer published in Buzzfeed, Colorado Homes and Lifestyles (a piece for which she was awarded a prize by The Denver Press Women), Colorado Life, and Colorado Central magazines as well as in newspapers throughout Colorado. Since retiring from teaching English and creative writing, she has turned to fiction, taking classes and taking part in writing groups. She has also found the time to practice SAORI (Zen-style) weaving and exhibit her wall hangings in art shows in Central Colorado.

Marcella Peralta Simon is a retired Latinx grandmother, splitting her time between Cambridge, UK, and Kissimmee, Florida. She has been a diplomat, university professor, and instructional designer. She writes poetry and short fiction. Her artwork has been featured in Smoky Blue Literary and Arts Magazine, Beyond Words Literary Magazine, Tofu Ink Arts Press, Persimmon Tree, and The Acentos Review.