The Resistance of Shakuntala
by Monona Wali 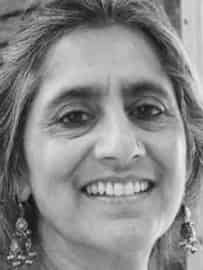 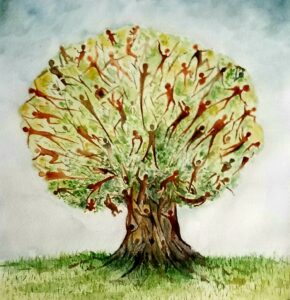 Illustrated by Emily Thornton Calvo
In troubled times, I turn to the ancients. I’ve been thinking a lot lately of the story of Shakuntala and The Ring of Recollection. This is a play in seven acts written in the early fifth century CE by Kalidasa, who is considered to be one of the great poets and writers of classical Sanskrit literature.

We meet Shakuntala, a young, orphaned maiden who is being raised in the forest hermitage of a great sage. One day a great and good king (more about him later) comes hunting in the forest and sees Shakuntala, is entranced by her and she by him. They fall in love. They have a hasty marriage before the King is called back to his palace (and to his other wives, none of whom have given him an heir) – but before doing so he gives Shakuntala a gold ring with his royal crest on it as proof of their marriage and instructs her to come to the palace in due time.

But because the play needs drama to satisfy its audience, things have to go wrong. In this case, Shakuntala unknowingly invites the rage of a visiting sage. In her lovesick and now pregnant state, she fails in her duty to greet and attend to this great holy man. He puts a curse on her that when she goes to the King, he will have no memory of her. After a couple months Shakuntala goes to the palace with an entourage. When she arrives, sure enough the King has no memory of her. She reaches for the ring only to find it is gone – it must have fallen off her finger when she bathed in the river. The king accuses of her lying. He says, “When naïve female beasts show cunning, what can we expect of women who reason? Don’t cuckoos let other birds nurture their eggs and teach the chicks to fly?” Shakuntala replies: “Evil man! You see everything distorted by your own ignoble heart. Who would want to imitate you now, hiding behind your show of justice, like a well overgrown with weeds?” The king is taken aback by her anger; it seems so genuine. Still, with no memory of their forest marriage, he cannot take a pregnant woman as his wife and she is ordered to leave. But her entourage refuses to allow her to return with them. Nobody will take her.

This is the poignant moment where we feel Shakuntala’s pain – by denying paternity, the king has denied her any legitimacy in this very strict society.

She cries out “Mother earth, open to receive me!” Witnesses say she is miraculously whisked away by a ray of light. And she disappears from the play until the end.

At this point in the drama, which I read partially as a story of a great injustice against women, I have to admit that Shakuntala is not terribly satisfying as a character. What after all, is her act of resistance? Apart from a small outcry, she accepts her fate meekly and is rescued not by her own agency but by the kindness of the divine world. Her resistance is not a satisfying feminist pink pussy hat wearing protest.

As fate would have it, a fisherman is apprehended by the royal police trying to pawn a gold ring with the royal crest on it. They learn that he found the ring in the belly of a fish. When the ring is returned to the king, the memory of Shakuntala returns and he realizes he made a terrible mistake sending her away. “This cursed heart slept when my love came to wake it, and now it stays awake to suffer the pain of remorse.” He sends his men to find her, but to no avail. He descends into self-hatred and self-questioning; no one can cure him of his heartsickness. It is the king who is the more compelling character. In the fifth century, it was believed that it was through the king that the natural, social, and divine worlds have unity and order, so when the king learns of his mistake, not only does it affect his heart, it undermines his whole sense of dharma, of duty to his subjects because his action caused injustice.

Finally, in Act 7 he finds himself in a celestial realm, in the abode of a demi-god. The king sees a little boy playing. He says, “Why is my heart drawn to this child, as if he were my own flesh? I don’t have a son. That is why I feel tender toward him…”

Of course this is his son, born by Shakuntala. It is in this celestial realm that she has been living. So the two reunite, the story of the curse is revealed and they understand that neither one is to blame. The cosmic order of the universe is restored.

And it is only at the end that I come to understand the beauty of Shakuntala’s action. She raises her son to know that his father is a great king. She does not forsake her love of the king. In doing so, she inherits her rightful place in the kingdom and she retains her purity and her power. Her great act of resistance is to hold on to the truth.

Towards the end of the play, a sage says to Shakuntala:

You were rejected when the curse

That clouded memory made him cruel,

But now darkness is lifted

And your power is restored –

A shadow has no shape

In a badly tarnished mirror,

But when the surface is clean

It can easily be seen

These are lines that speak to me: A shadow has no shape in a badly tarnished mirror.

Having lived through the four years of the Trump presidency, like most sane people I was outraged. What was happening to America? How could the very ideals of freedom and democracy be so undermined by a terrifying emperor with no clothes surrounded and supported by willful ignorance and greed? Suddenly I found myself more patriotic than I’ve been my whole adult life. Violent white supremacists were taking my America away from me, the America that beckoned my parents to its shore over sixty years ago with its promise of enlightenment and education.

But what has been my resistance to this injustice? Have my pink pussy hat- wearing, my phone banking, letter writing, and clicking on the ‘donate’ button been nearly enough?

Could I at least look closely into that badly tarnished mirror? The struggle of the last years has been to try and fashion some relationship to the capital T of truth. Not just the truth that has been under attack by false news and alt news and outright lies, but the kind of truth that Shakuntala holds on to, that ultimately redeems her and sets the world right.

At first, I questioned this surge of patriotic loyalty. Has America ever been this rosy place of freedom and enlightenment? I kept hearing the voices of Black people who scoffed at the idea. And there was the Standing Rock protest to remind us of the genocidal origins of the country and the continuing rape and plunder. And then I read Dark Money by Jane Mayer, which documents the successful takeover of the government by billionaire free market fundamentalists. But even with this clear view of the ugliness of America, I confess I am not a cynic at heart. Truth also demands that I look honestly at my own experience in this country. I have ridden the immigrant’s dream. I have had a wonderful education and a crazy amount of freedom to fashion the life I want. Mine is the position of ultimate privilege – to be able to fight for the rights of others.

The shape of the shadow I see so clearly is the civil war between the Western and Eastern mind as it plays out inside my head. The western mind believes above all in free will, in the power of the individual. A western mind does not allow us to accept our helplessness in the face of great injustice – we must fight. After all, we have the great examples of Martin Luther King Jr. and Cesar Chavez and Gloria Steinem. But the eastern mind plays tug of war with that belief; as we head toward the inexorable extinction of our species, I cannot let go of the idea of karma. All that is, and is meant to be. Fate written by an invisible hand against which we have no power. Isn’t our idea of heroic individualism just connected to false ideas of ego, ideas, as the Buddha advises us, we should be working hard to rid ourselves of?

The truth is, I think I will always waver between these opposing views. They create a necessary tension within me – the tension that allows me to live in two worlds – the active voice and the questioning voice. Interestingly, the one path through the opposing forces of free will and karma is the idea of dharma, of duty. It is this path that the good king followed, for he is working out his personal salvation by trying to do his duty, to right the wrong he inflicted on Shakuntala. Following our own personal dharma, our higher sense of duty to the Truth, offers the most compelling path out of the quagmire.

So what truth do I hang on to? For the poet Kalidasa, the capital T-truth is Siva.

Barbara Stoller Miller, in the introduction to her excellent translation of this play, observes that Siva is called the “the God who is half female,” and that the male and female aspects of existence are bound into a single androgynous figure. Miller asserts that these concepts are fundamental to the meaning of Kalidasa’s writing.

Although Siva as a figure of religious worship does not work for me, the idea of Siva does. The vision of unity brought out by halves is where I will ultimately lay my hat. The truths I hang on to are the corny ones of the heart – the capital L truth of love, the capital B truth of beauty (so much in evidence in Kalidasa’s language), the capital F truth of family and friends and fiction. I hope I can serve those truths dutifully. I will hold on to resistance in its many forms, manifested so beautifully in the figure of Shakuntala. Still, I hope in her next life she won’t be so noble, and I hope she will inspire a great uprising against the powers that be.

I wrote this piece in the aftermath of Donald Trump’s election in 2016 for a Writer’s Resist event. I questioned the meaning of resistance, and whether I was doing enough. I had recently re-read Kalidasa’s famous story of injustice “Shakuntala and the Ring of Recollection.” I had to resolve for myself Shakuntala’s seeming passivity, and it made me reflect more deeply on how Kalidasa’s world view might actually instruct us on what we were going through in contemporary times.

Monona Wali’s novel My Blue Skin Lover, won the 2015 Independent Book Publishers Gold Award for multicultural fiction. She is an alum of Hedgebrook, Breadloaf, and the Squaw Valley Community of Writers. Many of her stories and essays have been published in literary journals including The Los Angeles Review of Books, Santa Monica Review and Catamaran. Prior to being a writer she was a filmmaker, directing Grey Area and the documentary film Maria’s Story. Born in Benares, India, she lives in Los Angeles where she teaches writing, literature and film at Santa Monica College and Antioch University.
Next: The Rubble That Is the Past »
Home | Archive

17 Comments on “The Resistance of Shakuntala”