The Visit
by Patricia Boswell 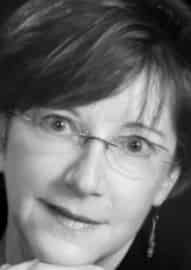 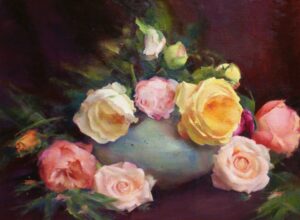 Illustrated by Mary Rose O’Connell
“Chaplain, I need to ask you a question,” he said, smoothing an olive-drab combat cap on his knee as we sat beside the hospital bed.

I waited in silence, thinking about my dinner getting cold and hoping I could make this quick. The referral, labeled “withdrawal of care, room C11,” had come in just at the end of a long and dispiriting shift. For weeks, I had been going through the motions, convinced that chaplaincy was not, after all, my calling. All I wanted was to go home.

I knew the man was military as soon as I saw him: even in old age and walking with a cane, he was ramrod straight and formal. As an Army brat myself, I knew the look, so I asked. “Marines,” he corrected with a smile. “Korea.”

Now, when he didn’t ask his question, I used a standard opening: “Tell me about your wife.”

Folding the cap and putting it back in his pocket, he brightened. “Eileen is a pistol. I married her after my first wife died, and she brought me back to life – swept me off my feet.”

He reached out to stroke her lank, gray hospital hair, tangled on the pillow. “Her hair shone like copper.” As he told me stories, the woman he loved emerged – not the sunken form in the harsh glare of the hospital lights, with tubes and wires attached, but the vibrant woman who made his heart race, raised his teenage son as her own, and won over skeptical in-laws with sheer grace.

In answer to my unspoken question, he said, “I told Chad not to come. His job in Texas is too important.”

He had brought me here for a reason, so I gently prodded. “You wanted to ask me something?”

Out came the cap, and this time he put it on his close-cropped gray hair. He told me about the day he found his wife lying on the floor of their bedroom, how he came home to find her stray cats gathered, waiting to be fed, and their townhome smelling of scorched coffee from the old percolator, still plugged in at 2:00 in the afternoon. His eyes welled, and the muscles of his jaw clenched and unclenched. “I called 911,” he said, “but she’s been like this ever since.”

After we had spoken for about an hour, I said, “Sir, your question?”

His face crumpled. Tears streaming down his face, he said. “Chaplain, they told us there was no murder in war. If I tell them to turn off these machines, is that murder?”

I reached out my hand, and he gripped it. My training had been clear: answer questions with questions to help people draw their own conclusions. I remembered that, but I also saw my own mother, pleading with us to stop the IV fluids, to just let her go. And my dad’s anguish.

“You’ll hear that it’s playing God to turn off this ventilator,” I said, “but perhaps it’s playing God to put her on it in the first place, to force air into a body that wants to shut down.” Then seeing the question still in his eyes, I said simply, “It’s not murder.”

We sat holding hands for a long while before he spoke. “If I tell them to turn off the machines, will you be with me when they do it?”

“I will,” I said, knowing it would most certainly be on my day off.

“I’ll ask them today,” he responded. I gave him my cell number and turned to leave. Then I turned back. “Sir, the cap?”

“I was strong when I wore this cap. It helps me be strong now.”

I walked into Eileen’s room at 10:30 and found a young man with the marine. “This is Chad. He was already at the airport when I told him not to come. Arrived an hour after you left here yesterday.”

The technicians knocked softly on the open door. “Are you ready, sir?” He nodded. Holding my hand and his son’s, he asked me to pray. The machines quieted, one by one. As I sent Eileen’s soul on its way, I hugged my friend and thanked him. “For what?” he asked. I just smiled and squeezed his hand.

Stepping into the elevator, I encountered a young woman, crying. I hesitated, then volunteered, “I don’t mean to intrude, but I’m a chaplain. Can I help in some way?”

I have found that it is only through building relationship that one learns compassion. When I found myself just going through the motions, what turned me into a chaplain was simply bonding with a single man who needed my help. I hope this story inspires others to reach deep and reach out.

Patricia (Pat) Boswell is a United Church of Christ minister living in Greensboro, North Carolina. She received a B.A. in English at the University of the South at Sewanee, a Masters in Public Administration from the University of North Carolina at Chapel Hill, and a Master of Divinity from Wake Forest University. Her first career was spent as director of communications, training, and public affairs for a large municipality. Ministry is her second career. Pat is currently working on a book about her relationship with her brother John Boswell, a National Book Award-winning author and historian of marginalized peoples.
Next: The Resistance of Shakuntala »
Home | Archive