When They Took Dad Away
by Barbara McGillicuddy Bolton 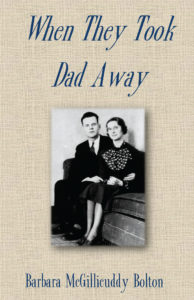 In the spring of 1952 eight-year-old Barbara and her brother Clement, fourteen months her senior, return from Sunday School one afternoon to find that Daddy has been taken away. He is confined for the next one-and-a-half years in Augusta State Mental Hospital. When They Took Dad Away depicts the four McGillicuddy children’s shock at losing Daddy, Mumma’s struggle to provide for their future, the generous and disruptive ministrations of relatives, and, ultimately, Daddy’s reentry into family life, difficult in various ways for all involved. The story begins in Woolwich, Maine, population circa 1000, and ends in Houlton, Maine, population circa 8000.

Barbara McGillicuddy Bolton’s poetry has appeared in Echoes Magazine and National Catholic Reporter, her short fiction in Puckerbrush Review and Persimmon Tree. She contributed a chapter to Uncovering Teacher Leadership: Essays and Voices from the Field. In 2015, she self-published a novel, Lulu Goes to College, based on her freshman year in college. Barbara grew up in Maine and graduated from Colby College. A retired teacher with three grown children, she and her husband spend summers in Aroostook County and live the rest of the year in Brooklyn, New York.