Wind — A Novel of the Ice Age
By Patricia Kranish 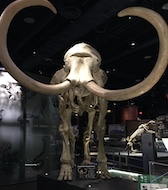 Twenty-five thousand years ago small migrating bands of hunters and foragers converged on paths across the freezing earth. Evidence of their existence is etched in their long-buried bones, turned to stone as hard as the tools they shaped over the millennia.

Archaic vestiges connect the common threads that weave through the myths of all people everywhere. Brothers clash, floods engulf the earth, good and evil are forever locked in battle. No matter how far separated by time or distance we are from our earliest ancestors, we share the collective longing to pierce the mystery of our own humanity.

They were predators and prey. They made up for what they lacked and what they feared by shaping the equivalent of tooth and claw, weight and warmth. They took only what they could carry on their backs, staying in one place just long enough to strip the fruit from their knotty stems, swallowing flinty seeds, bitter leaves and unyielding rind, their hard stomachs wringing the last bit of nutrition to sustain their strength.

When the last of the fruit was plucked, and their prey took flight, they moved on in a race against time, when the ground would freeze and the vines would fold into the harsh sleep of winter. Wind is the story of Sura, her people, and ours, and the fight against the forbidding wind that dominated life in the Ice Age.