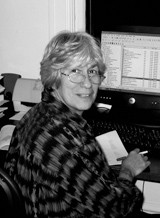 What do we want from our women friends? We want them to be funny and smart, to understand our problems—personally and politically—and to be sympathetic, offering suggestions but not giving us a hard time if we don’t take their advice. If our friends happen to be able to illustrate our problems while making us laugh (with the occasional audible snort), offering solutions by way of fabricated personae who can roll with the socio-cultural punches, and if they syndicate those illustrations in newspapers all over the country and publish them in multiple books—well then, so much the better. Nicole Hollander, one of Chicago’s own true divas, is that kind of friend.

A good chunk of the history of women’s liberation movement in the U.S. can be traced in Nicole’s cartoons. For more than thirty years, we’ve gotten pleasure from seeing her characters reveal and mirror our own faces while they think about the things we think about, often—hilariously—in the same ways we do. You probably know Patti, the TV news anchor who recites deadpan headlines that nail true-life villains; the friends who engage in “bad girl” chats; the fortune tellers who peer nearsighted into hand-held crystal balls to announce bizarre (or boringly ordinary) futures; the cats who demand fealty from humans in devious ways; and Gernif, a seriously bumpy citizen of another planet cast as the romantic lead in Earthwomen’s fantasies.

Many women spend what could be considered entirely too much time dealing with the mother/daughter relationship (full disclosure: I wrote a whole book about it), but our burdens are lightened by the ongoing dialogue between Sylvia and her daughter Rita. Sylvia’s requests, responses, and ironic observations are tossed over her shoulder from the bathtub, where she sits with head and shoulders visible above the bubbles; or she yells through a doorway while typing an assignment for Sylvia’s Surefire School of Whatever-It-Is-This-Time. “Ma—” begins Rita’s inevitable rejoinder, often only a few words expressing her exasperation and affection, making us laugh and maybe even saving some of the money we’d have given to a therapist, so we can spend it on movies or cookies instead.

And when we shift focus from content to form, we can take delicious delight in her drawing—the details! Lamps changing their shades from one frame of the strip to another; designs on dresses as various as polka dots, svelte vertical stripes, or Floridian foliage; earrings bold and out of scale beside the laugh line in the last frame. And the shoes! Ohmigod, the shoes! Even those who wear Keen sandals and little rubber Crocs damn near every day of our womanly lives (like me) will sigh, softly and deeply, at the sight of those shoes: platforms so distinctive you can feel the suede, patent leather, rosebuds so shiny you can catch their flash in newsprint.

Always, too, there are the little signs on the fridge, on the wall at Harry’s bar, taped to the apartment door by the pair of sly, slavering Dobermans; and (as in the set published here) the tiny sidelight conversations that counter or illustrate the primary storyline of the strip. On my own computer table, I’ve had for years an example of the latter: a tiny yellowing paper rectangle in which a disembodied voice is asking: “Would my honey like a cup of herbal tea near her keyboard?”

In this issue of Persimmon Tree, we’ve got Special Goddesses who deal with decidedly contemporary problems, irritable Fairy Godmothers whose benevolence is somewhat shy of the model created for Cinderella, Superheroes who belligerently insist on intelligent thought and physical action from those they (might) rescue, plus a few cameo appearances by the queen bee herself, Sylvia—it’s a bonanza.

After you’ve read/seen Nicole’s work in this issue, give yourself lots more opportunities to laugh and think at the same time by taking these helpful hints: Go to her website (www.nicolehollander.com.) Get a copy of her newest book, Tales of Graceful Aging from the Planet Denial (Broadway Books, 2007), in which she wonders if the gracefully aging woman is better served by plastic surgery or a really good haircut. Look on your own bookshelf for a copy of her first book, I’m in Training to Be Tall and Blonde (1979). This one includes the bonus value of sweet nostalgia. And, now that Nicole is doing performance, you can organize a gig to bring her to your hometown. All of these helpful hints are part of an ongoing list, since Ms. Hollander shows no sign whatever of stopping any of this activity. I’ve been to her house, and I can tell you there’s more art in there than cats; you know what that must mean. I’m serious when I say that you will want to spend as much time as possible in the company of a woman whose idea of Heaven is tiny cupcakes served continuously.

Judith Arcana's first two books, Our Mothers' Daughters and Every Mother's Son, are feminist motherhood classics; her third is a literary biography, Grace Paley's Life Stories, and her fourth a poetry collection, What if your mother. Judith's poetry and prose appear often in journals and anthologies; more is forthcoming in 5AM, Bridges, Umbrella, Feminist Studies and two anthologies.
Next: Eleven Poems »
Home | Archive