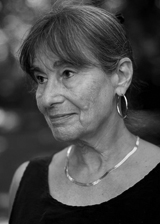 It is a thrilling thing to be introducing Maxine Kumin to yet another audience. Figuratively and literally, Maxine Kumin is a woman for all seasons. But for those of us who have been traveling in her wake for decades, she is a model of how to live, as well as how to write, courageously and sanely, with artistic craft and generosity, out of a profound love of life—which includes not only human life, but animal and vegetable life, and in fact the life of the planet—in all its bodily sensuousness, all its fragility.

Born in 1925, Kumin “began writing poetry in the Dark Ages of the fifties with very little sense of who I was—a wife, a daughter, a mother, a college instructor, a swimmer, a horse lover, a hermit” (from To Make a Prairie: Essays on Poets, Poetry, and Country Living, 1979.) It was before the Women’s Movement. It was a time when the editor of a literary journal could reject her poems with the explanation that he had already published a poem by a woman last month. Yet she published her first book,Halfway, in 1961; in 1973 she received the Pulitzer for Up Country, and she has won just about every other poetry honor there is. To date she has published sixteen volumes of poetry—as well as novels and short stories, essays about poetry and about country life, children’s books, and a memoir. How did this come about? In the poem “Life’s Work,” Kumin remembers the story of her mother “fresh out of the Conservatory” stopped in her career tracks by an irate father “saying no daughter of mine . . .” and her own “perfect daddy . . . wearing gravy on his face” forbidding her to join the Aquacade, swearing she would come to grief. “Well,” she remarks as if casually, “the firm old fathers are dead/ and I didn’t come to grief/ I came to words instead.”

As I write, I notice that the title of this poem can be taken two ways. A life’s work is a career; but for Kumin, life is work, and Kumin works at her poetry just as she works at honoring parents and caring for children, a farm, horses about to foal, a barn to muck out: with skill as well as passion. Her early work was all in traditional forms, and her feel for the music of poetry abides when she writes in free verse. Her seemingly-conversational “plain style” and sense of humor are, like Robert Frost’s, cannily designed to capture the reader. Kumin’s eighteen-year friendship with Anne Sexton, whom she met in a John Holmes’ writing workshop when they were both young mothers, was one in which the two women kept a phone line open in their respective Boston suburbs and workshopped poems with each other almost daily, honing their craft, respecting each other’s styles. As a teacher and mentor, Kumin is famous for her encouragement of younger women. Small wonder one of her books is called Nurture. “Darlings, it’s all a circle,” she says. In “Caring: a Dream,” she remarks, “nor is it one thing to save animals/ and people another/ but seamless.”

Kumin’s appetite for life is inevitably shadowed by mortality—but mortality in her poems is inevitably brightened by her evocation of existence as ongoing cycle, as in the beautifully evocative poem “Our Ground Time Here Will Be Brief.” Although she writes often in grief and rage against “the dark and degrading” history (and present history) of human evil, and although she has survived more than one crippling accident, she is always being “stunned into wholeness.” As she urges in “Women and Horses,” we should celebrate what we can, including howling and serene babies and the steamy sex lives of “the able-bodied among us,” and stay feisty.

It has been my privilege to swim without benefit of bathing suit in Maxine’s pond, help harvest and eat her veggies, walk in her woods, and be laughed at for my pathetic performance as a horsewoman on her trails. It has been my joy to sit and go over our manuscripts together, and to teach together at New England College. In her eighties, Maxine continues to be tough and tender-minded. When I grow up, I would like to be like her.

Alicia Ostriker, a poet and critic, was a finalist for the National Book Award for The Crack in Everything (Pittsburgh 1996) and The Little Space (Pittsburgh 1998). She has published eleven volumes of poetry and is the author of books on poetry and on the Bible. She has received awards and fellowships from the NEA, the Guggenheim and Rockefeller foundations, and the Poetry Society of America, among others.
Next: Soup »
Home | Archive