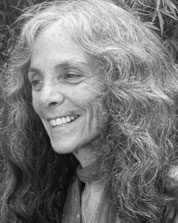 It’s eleven p.m. and the phone rings as I sit at my desk. I hear my friend Chana’s voice on the answering machine as I screen the call. “Anita,” she’s saying, “if you’re still up and you have a minute, I’ve got a question about a poem I’m sending out in the morning.” I pick up, she e-mails me the poem in a couple of versions; we talk, deliberate, and she makes a decision.

A few weeks later, I am the one who is phoning her, asking her help with a dilemma about the choice of poems for my new book. We jokingly call it the “Neighborhood Poetry Emergency Service,” but the service has kept each of us sane and writing for thirty-six years. We live around the corner from each other and do the things for each other that neighbors do; we grew up in similar circumstances, and understand each other—the echoes and history behind our current thoughts and dilemmas—the way sisters do. We have seen each other through the better part of our adult lives, and we meet every other week to have dinner and to look at each other’s latest work. These days, knowing ever more deeply the preciousness and fragility of life, we tell each other often how lucky we are.

On the surface, the subjects of Chana Bloch’s poetry are the things we talk about at her kitchen table or mine. “I’m having a terrible time with my mother,” we used to say, or, “I think my marriage is in trouble.” “This is what’s happening with my children,” one of us says now, or “This is what’s happening with my body,” or “My friends are in danger,” or “The world is in danger.” Thirty-six years, Chana’s carefully crafted poems set before me for my scrutiny, my suggestions: how assiduously and devotedly she works them, draft after draft, her probing, curious mind not content with my indicating which word or version I prefer, but insisting I explain my reasons. A thirty-six year conversation that explores all that threads through our days and our minds. On the surface, I said, Chana’s poems are the stuff of this dailiness, articulated, condensed, refined; at their depths, her poems are about the toughest complexities and contradictions of living.

Chana’s poems are masterpieces of understatement, filled with the small, telling details that illuminate a character or a situation. We know her parents from what she tells us in “The Discipline of Marriage” : “All day my father depleted his poor stock of words,” “My mother applied glittery blue to her eyelids.” And we read into and between the spare lines of “Twenty-fourth Anniversary” to understand the story of a marriage that is failing:

Pillars forget they used to be
tree trunks, their sap congealed
into staying put.

But the restrained, honed quality of Chana Bloch’s language conveys no sternness, no aridity; on the contrary, her poems are stunningly embodied, delicious, and gutsy. In one of my favorites, “Eating Babies,” Bloch verges into what can seem forbidden territory, the sensuous delight a mother takes in her infant son:

…Nibble earlobes, dip
my tongue in the soft fold
of shoulder and throat.

Gutsy as well are Bloch’s poems about sex. She is not a romantic; the vocabulary of sexuality in her poems is fierce and honest, uncluttered by traditional assumptions. Witness this, from “Sometimes I Want to Sink into Your Body”:

… just when I’d like to splay you
tooth and nail.

Or the unabashed clearsightedness of “After Sex”:

A man’s got to wear his susceptibility
out in plain sight.

What struck me in Chana’s work when I first knew her was the way in which a poem of hers would move suddenly, before the reader could begin to anticipate it, from a quite ordinary situation to a level of universality without missing a step. Thus, again, in “Eating Babies”:

Bite one cheek. Again.
It’s your own
life you lean over, greedy,
going back for more.

Suddenly, in these last three lines, we find ourselves in the darker, more ambiguous domain of our mortality, and we arrive at an understanding of why the sensuousness of new flesh is so compelling to us.

Lately we begin to talk logistics,
to draw up contingency plans
for a war we’re preparing
to lose.

There is a tenderness in Bloch’s work for the vulnerable, flawed, inscrutable and searching beings we are, and an underlying forgiveness for the mistakes our humanness so often leads us into. While not shying away from difficult truths, Bloch’s poems are informed by the generosity of her nature and by what resolves at last in an impulse to praise this life. “It is good,” she writes, “It is very good” —the ending of the title poem of her new book, Blood Honey, words praising life she puts in the mouth of a beloved friend who, in the poem, is nearing death.

Beyond the power of language and its limitations—another subject that weaves through Chana Bloch’s work—there is the continual effort to make meaning. From “The Stutter”:

Years ago in a high chair
he drummed wet fists, his face
a knot: Give me
words. The fury
beat in his throat. Mother and father, we put
words in his mouth, we

speak harder, faster, we give him
a life to chew on.

Chana Bloch’s poems give us a life, an abundant life, to chew on. I am profoundly grateful for them and honored to introduce them.

Anita Barrows is a poet, translator (from French, Italian, and German), and clinical psychologist. Her achievement in poetry includes four published books, multiple journal publications, and several awards. Harper Collins (SF) has recently published Barrows' third translation of Rilke's work (with Joanna Macy), A Year With Rilke. She lives in Berkeley, CA, where she is a mother and a grandmother and a political activist.
Next: Hardscrabble Times »
Home | Archive

One thought on “Writing a Woman’s Life: An Introduction to Chana Bloch’s Poetry”