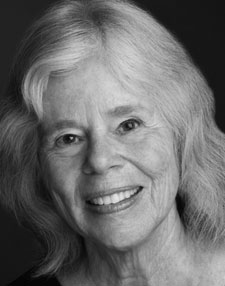 We’re sad to announce that Ruth Stone, the poet we honored in our first issue ofPersimmon Tree, passed away in November, 2011. Her fierce, honest voice inspired us, and it will continue to do so.

Ruth Stone wrote in relative obscurity until receiving the National Book Award in 2002 for In the Next Galaxy, her collection of poems. She was 87. Her life was difficult—she survived the suicide of her husband and years of economic struggle—but she preserved. Fame came only at the end of decades of writing poems and perfecting her craft.

You can see the Ruth Stone poems that appeared in the first issue of the magazine by visiting our Archive. Here is one from her book in 2002 that I especially like:

In the Next Galaxy

Things will be different.
No one will lose their sight,
their hearing, their gallbladder.
It will be all Catskills with brand
new wrap-around verandas.
The idea of Hitler will not
have vibrated yet.
While back here,
they are still cleaning out
pockets of wrinkled
Nazis hiding in Argentina.
But in the next galaxy,
certain planets will have true
blue skies and drinking water.

As I write this, we’re in the midst of our year-end fundraising drive. This is something I dread doing each year because I hate to ask people for money—but it is necessary for our survival, and now that the drive is underway, I am so very moved by the generous outpouring of support we are receiving. Most of you contribute through Fractured Atlas, the nonprofit umbrella we operate under, but some of you send checks with little notes of appreciation included. That’s really special!

I wish you well during the winter’s cold,

Nan Fink Gefen was the founding publisher of Tikkun magazine in 1985 and the founding editor of Persimmon Tree magazine in 2007. She is the author of Stranger in the Midst (Basic Books, 1997) and Discovering Jewish Meditation (Jewish Lights, 2nd edition 2011), and her fiction and nonfiction pieces have appeared in literary journals and magazines. She currently is working on a novel, Woman on a Wire.
Home | Archive |