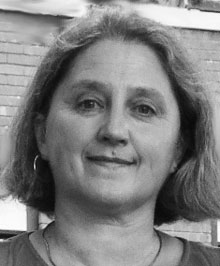 It is ten a.m. and Little Red’s mother is drinking dandelion wine from her largest teacup because she and the Woodsman had a fight. “How am I supposed to take Grandma her basket when I feel like this?” she says to Little Red.

Her mother waves a hand weakly.

Red grabs the basket and the cloak Grandma made and dashes out. It is only a ten-minute walk, but as soon as she gets to the woods, she goes off the path to have a picnic. She is about to sample the blackberry jam when out of the bushes leaps His Slavering Hairiness.

Little Red is, of course, terrified, and terror causes her to babble. She tells everything she knows including how her grandma is sick and please don’t hurt me and her mother and the Woodsman had a fight. The Wolf walks off while she’s still talking.

She repacks the basket and hurries back to the path. “I’ll be good,” she whispers. “I’ll be very, very good.”

At the cottage, she finds the door open and the Wolf in Grandma’s bed wearing Grandma’s mobcap and peignoir. “Oh Grandma!” she cries, hanging back by the door.“Your eyes are so big.”

The Wolf is having a wonderful time playacting. It is going just as he planned! In his best falsetto, he replies, “The better to see you with, my dear.”

And so on, line by line, with Little Red knowing she is acting a part in someone else’s play and unable to change the plot. Her final speech is “Grandma, what big teeth you have!” and from that point on, it’s all about gobbling.

Greedily, without chewing, the Wolf slurps her down as if she were an oyster. He gulps and belches, and then lies dazed and swollen, contentedly replaying his performance in his mind.

He is discovered thus by the Woodsman with his ax. The Woodsman has been at Red’s house where her mother was wailing sloppily that she should never have let Red go out alone.

He is having a wonderful time too. Without further chitchat, he chops off the Wolf’s head and slits open its belly. Out roll Red and Grandma, upside down and trailing steaming innards.

“Grandma!” cries Red, “I knew there was something wrong – I knew it didn’t look like you – but I didn’t know what to do! My cloak’s all yucky, Grandma, I didn’t like it inside the Wolf …”

“There there, my dear,” says Grandma, “stop jabbering. Buck up. The cloak is washable. Let me just find my spectacles,” and she reaches back into the Wolf guts.

“So,” says the Woodsman balancing his ax on one finger. “How was that for heroism?”

Red begins to whimper: It has been the worst day of her life, she says, her mother and the woods and getting eaten by a Wolf and now this nasty mess in Grandma’s nice cottage.

“Everything can be washed,” says Grandma.

“Lucky I dropped by, wouldn’t you say?” says the Woodsman. “Didn’t I save the day again? Ta-dah!”

Grandma nods at him and pats Red’s shoulder. “Yes, I said thank you. I feel such a fool, letting that Wolf eat me.”

The Woodsman deepens his voice. “But now all is well. And it’s time for lunch.”

“Well,” says Grandma, “at least the Wolf didn’t eat the good things in the basket. After we clean up, we’ll all have a bite to eat.”

“Maybe I’ll just take those good things for myself,” says the Woodsman, laying his ax down on the table. “I deserve some compensation. After coming all the way over here and being a hero. I think I’ll just take that basket for myself.”

“We’ll all share it after I clean up,” says Grandma.

“No,” says the Woodsman. “It’s mine. I deserve it.” He picks up the Wolf’s head and sets it on top of his head like a hat. “Grr,” he says. “Grr.”  Then he starts walking toward Red and Grandma with his arms extended in front of him. He makes more and more ominous growling noises.

“Everyone quiet down!” says Grandma, who has picked up a mop.

“Grr … grrr,” says the Woodsman in the Wolf’s head.

Grandma, who rarely makes the same mistake twice, exchanges the mop for the Woodsman’s ax. She protects her grandchild in the best way she can. Little Red stops crying in amazement, and Grandma sends her out to sit on the stone step with the jar of jam and a spoon while she clears away the Woodsman and the Wolf.

Meredith Sue Willis grew up in a small town in north-central West Virginia where her father was her high school biology teacher. She now lives in an inner ring suburb in New Jersey where she is active in a handful of political causes. She has published eighteen books, fiction and nonfiction, and is an Adjunct Assistant Professor of Creative Writing at New York University’s School of Continuing and Professional Studies. Her latest books are two collections of short stories, Out of the Mountains and Re-Visions: Stories from Stories. Please visit her website at http://www.meredithsuewillis.com.
Next: A Tale of Two Lobsters »
Home | Archive