I can see Toni scan my face, then my body. My sister isn’t the only one. They all do this: survey for signs. Toni has been away for a few days. I know that, but she tells me this as if it might be news. I try to read her expression. What does she see when she looks at me? Does she think there’s a difference? Am I going downhill? Fast? Do she and Andy and the others ask, ‘Will it be soon?’ Do they ask each other, ‘Is Deanne dying today?’

I think Deanne looks paler even than a corpse. But I’ve never actually seen a corpse. Open-casket funerals don’t count; death is disguised by the mortician. Shit. Why didn’t I think of make-up before? I could have been doing her face every day, a little blusher, a touch of mascara, or even the whole showgirl glitz if she wanted it. But I can hardly start doing my sister’s make-up now.

Her pale hands are around the straw, the tiniest bit of water goes up the straw.

Three heads with three straws to drink a milkshake. Two little girls in matching Madras playsuits. Andy, the freckle-faced boy from the farm next door, wears denim coveralls. Bright days where a quarter gained by trading a tooth could suddenly become chewing gum or a comic book. Andy chases us with a frog. We scream. Run. Circle to be caught.

Be afraid. He calls out – If it touches you, watch out. Laughter borders on hysteria. Our hair is shiny and young and flies in the wind like the mane of a pony.

How free we were then. It takes such effort now. My hands still work; I can guide the straw to my mouth if the pillow and the bed table and I are arranged carefully. It puts me in mind of lessons learned as a child – how to set out the plate, the water glass, the wine glass, napkin folded just so and cutlery in position for a formal meal. More and more, memories crowd over. It’s hard work to pull this day from the fog. I drift; I wake in another time. Toni is still here, my sister.

“Deanne? We could spend some time by the window. Do you want to go to the armchair? Deanne? Let’s sit out in the living room. Okay?”

Do I want to be in the armchair? It is by the picture window, cozy in the sun, bright with afghans; a comfort, but to get there! First the lifting into the wheel chair and then out again, the transfer, the placement of the foam pieces around my legs. I am to watch the chickadees in the spruce, or the street with vehicles going by. I draw the breath that I can and decide to, yes.

Death’s little fingers are not to gain a grip. For tomorrow, I may be unable and then my last chance gone. The sun is shining, so that’s something. Andy loves the sunshine, and this bright day is a gift.

The rain won’t let up. The end of the school year is two months away. I remember darker hair and a pageboy cut. Andy’s hair is buzzed short. No one has time to be in front of a mirror, impatient, so ready for life. Snakes and Ladders until someone would upset the board and the older two would yell. It’s your fault. You tricked me. I’m telling on you. Andy, Andy, come and play. Won’t you come with me today?

Toni has begun to help me; I am no help to her. We move to the chair. There is something in Toni’s eyes. I’m too much trouble. She would hasten me; she would dust her hands off with much satisfaction if I were to die. No. These are my dark thoughts, ugly beasts that have arrived with my death sentence. I was… no, I am charitable. Deanne the kind, they say. What a pity, they say. They expect I will be charitable and kind and comforting and to understand… but I’m dying, and they aren’t. Bitterness stalks me. I hunger for fairness and I enshrine it as a basic human right that I have been denied. I try to not think this way. Toni, my baby sister, who always wanted my attention and for whom I had no time, is giving me her time.

Time is running out for Deanne. Her head bounces softly against my shoulder as I hook my forearms under her armpits and straighten up, raising her as I stand. She’s lighter than a child, no bigger now than when her nickname was Dyna. For dynamite. For dynamo. I remember those pigtails! If our mother could get her to stand still they would be braided, if not, then loose. Big new front teeth and energy and crazy ideas that left us breathless to be with her. She’s breathless now.

Three weeks ago she could help some, and I needed that but now she’s smaller and I’m stronger and we manage. My big sister, Deanne. Andy’s wife. Andy brought flowers this morning. For Deanne to enjoy. She opened her eyes, and said, “too soon.” For funeral flowers she meant, and her face worked against the howl of sorrow that only came when Andy left.

Andy and I don’t have to do this alone. We are a small army of family and friends, some of us strangers to the others, but like a group of planets around the sun, we circle, we assist, we help Deanne. We celebrate if the food we have made is eaten. We wipe and clean up as if the smells are holy and we are the pilgrims. We are our best, we are our weakest.

They have a hospital bed for me now, delivered today. So many people die in hospital beds, but it may make a difference for them, so I’m grateful for that. And I’m here in my home, as I’ve asked, and they’ve done that. Small comforts that will ease my passing, if ease can be found. Andy has done this; he has honored my last request. I haven’t been an easy wife, he hasn’t been all I thought I needed in a husband, but we’ve come this far. A thought comes as a startle: it’s been worth it, my loving Andy. I have to tell him that. He brought flowers this morning, and I behaved badly. I should have thanked him.

And our friends and family, even Toni, yes, even her, have blessed me with their care. And that counts too, but not one of them would have an answer if I asked, Why me? Will the answer come or will I stop asking the question? It can’t be long now. I close my eyes but the sun reds my brain. I let the color seep into me. Yellow.

He rubs dandelions on his skin. Oh yellow! It’s pee! Andy, Andy won’t you pick me? We stalk away, in canvas running shoes, indignant, with thoughts unspeakable in youth. Andy throws a stick for the dog. A hunger inside has been seeded; it grows. Andy, Andy, and they called it puppy love. Andy and a girl sitting in a tree. K. I. S. S. I. N. G.

Deanne is sleeping, a bit of drool glistens at the corner of her open mouth. I turn the music down slightly, I walk on soft feet; I make coffee for the next ones to arrive. We rendezvous as the smell of coffee wafts through the air. It’s our meeting called to order, the beginning of our next campaign. We are losing. We are saddened. We are strengthened.

Poised as the freshness of adulthood is hair coiled and styled, lacquered with products, every day a test of beauty, prime, as good as it can be. A tinker, a tailor. The coffin fashioned, the winding cloth sewn. A soldier, a sailor. Marching on, eyes front. Sailing on, beyond the horizon. Andy, Andy, petals of a daisy, he loves me, he loves me not.

My end days. The end of me. The last petal of the daisy. Something else is going on. I sense it. I know what it is. I saw it before they did. The tables are turned so quickly. Andy’s not losing me, I’ve lost him. And if I die now, and I could, oh dear God, it could be now, and then this will be over. I won’t have to suffer the embarrassment of Andy and Toni coupling too quickly after my death or torture of all tortures, for it to happen while I am still alive. For then I will have to pretend that I don’t know about their journey into new love. Old love. There has been something between them forever.

So long ago. They met at the edge of the field, they had a blanket hidden within a rock pile they brought out and spread to keep their clothes clean. They rented a motel room, they rented an apartment, they married. She and Andy kissing. She and Andy loving each other. I was left alone.

Deanne’s been talking, nursery words. Is that the poetry of dying or a sweet return to simple times?

Andy, Andy where have you gone? With my life cut short and your love cut long. What if it’s a game? Tag and you’re it, fox and geese, chases around the trail marked in the snow. The game goes on as the players drop out. The king of the castle. The dirty rascal.

We return to her room. Has the blanket slipped? Is it time for another pill? A word is breathed.

The raspy whisper rises from her sleep, or her dying. Perhaps it is only random, but I let it be a directive. I will. My heart whispers. I always have. And Andy; I hope he will take the words as a gift, the final truth of their life together. And we wait. The heart is it. The prize is love, in all its messy, untimely trueness. The end and the beginning.

The air fills with intensity. The night nestles around us; clouds hide the stars; only the night-light glows softly. She is sleeping; her hair is like straw, but Andy, here now, strokes it kindly, places a kiss on her forehead, then holds her hand. I sit beside him and he takes my hand, too, and suddenly he kisses it. I draw back. Thank you, he says, don’t leave me now, he says. His eyes lock with mine and I can see everything and I understand everything and the knowledge leaves me faint. Death, for Deanne, becomes a final betrayal. Now I must live with that. 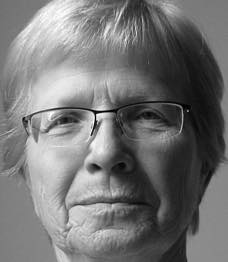 Author’s Comment:  I’m a collector of details that people tell me. Here are two stories that served as seeds for “To Love Andy”. I met a newly married gentleman in his 70’s who told me that when his first wife died ‘her sister thought that I’d marry her but I didn’t want that.’ The second story is of a woman dying who said of one of her helpers ‘that woman is after my man.’ (FYI – she was correct; after her death her husband married the helper.)  When I added in my long time admiration of those who provide palliative care, and the possibility of life in review for the patient, the story evolved. “To Love Andy” provided technical challenges in its triple viewpoints of the younger sister, the dying sister and the dying sister’s dreaming self.