Each morning she awoke and baked a cake.

It gave, she said, a meaning to her days.

The cakes she baked she stored in air-tight tins.

When all the tins were filled she took the cakes

and fed them crumbled to the ducks and drakes.

Then baked more cakes to store in air-tight tins.

Cakes none but undiscerning ducks would taste.

–– Sacha Rabinovitch
Sometimes, and there are days when it happens often, she said, sometimes, she needs to stop thinking about being a failure, sometimes, she wishes to escape from such thoughts, and while that is not entirely possible, while she cannot stop thinking about being a failure completely, she can make an effort to reduce the intensity of her thoughts about being a failure and she can make an effort to have a little respite from thinking that she is a failure and when she wants to do that, she needs to focus on a task, on a task that is very different from her main preoccupation, that of thinking and that of writing, on a task that makes her work with her hands and allows her thoughts to wonder freely in a field of wild flowers that is not really a field of wild flowers but that is what it feels like for her thoughts as they freely move, like butterflies fluttering from one swaying poppy to another and when she thinks of her thoughts freely moving she sees a field of white flowers in the sunshine. There are no occupations she engages in that allow her to work with her hands and to have her thoughts wonder freely, there are very few occupations she can engage in that satisfy both conditions; in fact there is hardly anything that helps her not to think that she is a failure, and even then not thinking about being a failure is only temporary, a little respite only, and that one thing, that one occupation that helps is baking cakes. So she bakes, she bakes a cake, or two cakes, sometimes three, and she bakes scones and puddings, and she makes tarts and then there are days when there are quite a few cakes, quite a few puddings, quite a few tarts, quite a few scones sitting on her kitchen worktops, she said, more than she could possibly eat, even if she were to eat only cakes, or only scones, or only puddings, or only tarts, too many baked things for one person. And on such days she thinks, she said, that baking a cake is pure pleasure but having a cake baked is not so pleasurable because it has to be eaten, it cannot be just looked at, and she always has too many cakes, too many puddings, too many tarts, too many scones for one person.

That woman had knocked on the door just as she was about to prick an apricot and almond brandy cake still in the oven and there was a chocolate sponge, freshly iced, and a lemon cake, already drizzled, cooling on a rack on the table and an apple pie, still in the tin next to the cooling rack and the woman made a comment, the woman said something but she could not remember what it was, perhaps something about the lovely smell and then the woman said have you just baked a cake, and she did not say anything to a question like that – because what could one say to a question like that? – and the woman smiled and the woman was looking at the cakes cooling on the rack and so she had to offer a taste, just a tiny taste of something, and she did not mind offering the woman a small piece of lemon cake, although the woman did not interest her and her lack of interest had nothing to do with the woman, that had more to do with her because in her days, she said, not many people interest her, in fact very few people interest her and, to be precise, hardly anyone interests her. The woman said something about the lemon cake being good, very good indeed, the woman said and the woman made one of those horrible noises of appreciation and immediately, while the woman was still masticating the last mouthful of the slice the woman had been offered, the woman glared at the chocolate sponge cake cooling on the rack on the table and the woman glared at the apple pie still in its tin and the woman made a comment, something about them looking good or yummy, yes, the woman used that infantile word, the word that rhymes with tummy, and the word she cannot stand and so it surprised her that she offered the woman a slice of the chocolate sponge and of the apple pie as well. Perhaps that was excessive but she felt, she said, that she had to offer the other two cakes to the woman to taste and that is not quite right because she is past the days when she felt that she had to do anything that other people expected her to do, she said, because that is the privilege of old age, the privilege that you can scupper conventions and you can be as eccentric as you want to, not that she thinks that offering a small slice of cake to a woman who wanted to know about parking regulations in her street was eccentric. Sometimes she wonders whether this rule – or is it a convention, or an expectation? – sometimes she wonders whether this expectation may be of her own making only, and so she wonders whether this privilege of old age to scupper conventions is true for everyone and whether other old people follow it but she has never asked anyone and so she cannot tell whether she alone has thought of this rule and appropriated it for herself but if the former were the case and the world allowed older people a certain amount of leeway to depart from social norms, then, she often wonders, would that be because society does not take old people seriously, or are there some other reasons such as that old people have earned the right to do as they please, she said, earned the right to do as they please by kneeling down in corners of kitchens when they were children, misbehaved children, and facing blank walls, kneeling down and facing a lifetime of blank walls. That is something she will have to ponder on, she said but to get back to the woman in her kitchen that day, it so happened that the woman tried all three cakes on that occasion but not because she felt that she had to offer her to try the cakes after the woman had been glaring at them and smiling at them, and smiling at her, and commenting on the cakes, but something inexplicable happened and she who does not like other people or has not liked other people for some time now, felt that that woman was not too bad and that was the reason, that was the sole reason why she offered her the cakes. Nothing else was on her mind, nothing else at all, there was no thought of giving cakes and getting love from the woman, none at all, absolutely none, she is certain of that because she is past the days when she offered love and she is past the days when she wished for love from others. 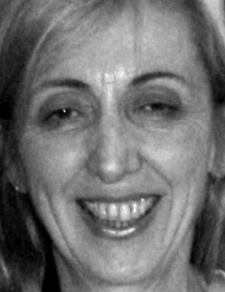 Author’s Comment: I wrote the story in response to Sacha Rabinovitch’s poem that chimed with my own experience of turning to baking when low or unhappy. The woman in the story seems to overdose and it becomes tragi-comic as she ends up with too much stuff to be able to eat it. Obviously, she hasn’t got anyone to share it with. It is not clear whether the visitor (the woman with a gentleman friend) exists or whether she is the figment of the protagonist’s imagination, part of her wishful thinking.
The poem ‘The Cake-Baker’ is reprinted with the kind permission of Gabriel Josipovici, who looks after the estate of Sacha Rabinovitch.
Vesna Main was born in Zagreb, Croatia, where she studied English and Comparative Literature. After obtaining a PhD from the Shakespeare Institute, University of Birmingham, England, she taught at universities in Nigeria and England and worked as a journalist, a translator and an arts manager. Her two novels, A Woman with No Clothes On and The Reader the Writer were published in 2008 and 2015 respectively. She admires the work of Kafka, Duras, Bernhard, Sebald and Josipovici. She lives in London, England and Languedoc, France.

10 thoughts on “Baking for Love”