I was primed for those first steps from an early age. Born in 1944, I was shamed for the loss of my birth mother as my parents dodged the disapproval of their divorce. Shamed for hiding the beatings from my stepmother whose untreated postpartum depression barked off the end of a leather belt.

I was primed for those first steps by my love of history. My anger was fueled by the horror of Jim Crow rape, murder and degradation, the forced removal of my Cherokee ancestors on the trail of tears and government spying on labor movement activists.

I was primed for those first steps by televised images of snarling dogs lunging at young people in Birmingham, Alabama, who just wanted a seat at the lunch counter, a good education, and jobs or the right to vote.

Now it is 1963, the summer after my freshman year in college. In June I start work at a summer resort hotel in Lake George, New York. I help cook three meals a day for the employees. Many are migrant workers who go from Florida to upstate New York according to the season. Others are local people and college students like me, here just for the summer.

College is very expensive and I need the money from summer work to help pay my way, but I also need to cry out against the lunging dogs and lynch mob ropes. So in August I leave work early and head for the March on Washington for Jobs and Freedom.

It’s a long ride on a Greyhound bus from Lake George to my sister’s apartment in Washington, D.C. In the evening her college friends gather for a beer and I take in their big city sophistication and upperclassmen’s cool. I listen as they report rumors of white gangs ready to attack the march tomorrow. They even call a department store to prove they could buy as many rifles as they want that night without restriction, and the salesman eagerly gives his name, hungry for the commission. I listen to their talk and sleep on it. In the morning I wake to a not too humid day.

After breakfast I give my sister a hug. The door from her apartment feels like a portal into the unknown, and I am ready … I hope. The city bus ride with shoppers and sightseers ends and I get off. I’m drawn toward indistinct crowd noise. Slowly the long blocks of dull concrete and bored pedestrians give way to the sound and rhythm of joyous voices.

As I reach the last intersection the marchers stretch out as far as I can see. The singers are in a semicircle and the people gathered around clap and join in.

There are more Black people than I’ve ever seen in my life, and I know, as I wait for the light to change, that I am here as much for my own liberation as I am for the rights of African Americans. I feel it deep in my gut, from long buried memories.

I knew at age six that my wanting to wear girl’s clothes and hang out with the girls was hated and feared. I still hide behind the nice guy I wear like a suit of armor.

Decades from now I will come out as a transgender woman. But that journey will be many more miles than I walk today. The light changes. The crowd claps and sings, and I take the first steps into one of the movements that begin to clear a path for me. 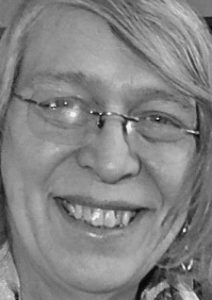 Author’s Comment: I went to the March on Washington totally on my own. From my own experiences growing up I had no problem understanding the need for this march, and I just wanted to be a part of making it as large as possible. I never forgot the feeling of liberation that arose in me as I crossed the street. I am a poet, but this piece seemed to demand a different form. Currently I’m working on both prose poems and a memoir and this piece will be a part of those projects in one way or another.
Emily Pittman Newberry is a performance poet living in Portland, Oregon. Her writing explores the challenges of living as spiritual beings in a human world, of the paradox of life. OneSpirit Press published her first full book of poetry, Butterfly A Rose, and a chapbook now used in art therapy for elders. She wrote poetry for the artist’s book Water by Shu-Ju Wang. Her work has appeared in journals like VoiceCatcher, Olduvain Review, The Tishman Review, Ascent Magazine, Chaos Poetry Review, and Kind Of A Hurricane Press. She was nominated for a Pushcart Prize in 2014. Her website is www.butterflyarose.com.

3 thoughts on “The First Steps”