When you’re married for fifty years to a man who fancies himself Mr. Fix-it, you don’t learn how to hang pictures, unclog dehumidifiers, or replace toilet seats. So when, after a weekend of guests that included two uber-bathroom-going toddlers, you discover that your toilet seats now roll like ships on high sea, you need to do something.

It was six months after Stu died, and I felt lost. I knew where his toolbox was – in the basement – but as soon as I saw it on the workbench, I backed away, afraid that, like Pandora’s Box, it would unleash what I couldn’t put back. It had happened moving Stu’s bike to the back of the garage – and when I realized his Cheerios were stale. Small unpredictable things that pulled me into what Joan Didion calls “the vortex of grief.” Not birthdays or death certificates, for which I was ready.

I phoned my friend’s handyman, but he was on a hunting trip. And Stu’s colleague, always willing to help me with house and computer problems, had gone to London. So I typed “How to Fix a Toilet Seat YouTube” into Google, and a calm and sturdy man with a mustache appeared on screen. He showed me how to lift the seat fasteners, remove the toilet seat, and unscrew the bolts, one, two, three. “I can do this,” I said to the screen. “Just because I haven’t, doesn’t mean I can’t.” The silver-buckled man, so technologically soothing, put the new toilet seat in place, screwed in the new bolts, and snapped the fasteners. Done.

I headed for the building supply store with two toilet seats (to get the identical ones), and a curly-haired salesman, my son’s age, reaffirmed my conquering abilities. I believed him because last month, thanks to a YouTube video, I put our queen-sized duvet cover back on the bed. When Stu was alive, it was easy after a wash to stuff the comforter into the cover and spread it across the bed. Stu would take one corner, I’d take the other, and we would shake until every lump fell into place. But on my own, after thirty minutes of sweat and swearing, comforter and duvet cover lay on the floor, a tangled mess. That is, until YouTube showed me four simple folds. “It only takes one minute!” insisted the young woman from Women’s Day, the video sponsor. I needed ten minutes to tuck the comforter into its rightful place – but I felt triumphant.

“Why not again?” I said, walking into the upstairs bathroom with toilet seat under arm and screwdriver in hand. The new bolts lay in wait outside the bathroom door. The toilet seat fit perfectly, and I felt Stu’s pride that I was managing on my own. He had worried that last year, giving me his passwords, making lists of bank and insurance accounts, even trying to teach me Excel – a hopeless task, as was removing old toilet-seat fasteners. I pushed and pulled; they wouldn’t budge – and because they were plastic, I thought they’d snap, which had happened to Stu. He’d had extras; I did not.

Crestfallen, I lay down on the duvet cover, sideways, to connect what was his half of the bed to mine. It was dark when I woke up, debating if I should try again as I headed for the little half-bathroom, its one seat still intact. 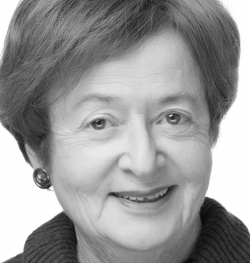 Author’s Comment: When I became a widow, I kept very busy that first year, afraid of those unexpected moments that trigger what Joan Didion calls (in The Year of Magical Thinking) the vortex of grief. Seeing my husband’s toolbox on his workbench was such a trigger, and I wrote this essay to capture one of those small, big, moments of loss – and how we carry on.
This essay is part of Mimi Schwartz’s recent essay collection, When History is Personal, which may be ordered at http://www.nebraskapress.unl.edu/university-of-nebraska-press/9781496206305/. Schwartz is Professor Emerita at Richard Stockton College of New Jersey, and her other books include Good Neighbors, Bad Times: Echoes of My Father’s German Village; Thoughts from a Queen-Sized Bed and Writing True, the Art and Craft of Creative Nonfiction (co-editor Sondra Perl), now in its second edition. Her essays have appeared in many journals and anthologies and seven  have been Notables in Best American Essays.