Not long after Honey and I celebrated our fifty-fifth birthdays, a battle began. Our minds were telling us we were vibrant and energetic but our bodies were rebelling against that notion.

Creaking, cracking, and other disconcerting noises emanated from us at the most inopportune times. Any body part that was not concaving was heading south. It was a phenomenon we had heard jokes about but assumed it would somehow elude us.

This mutiny started when Honey was bothered by sciatica. He bought a pain patch at the local drugstore. It seemed to be quite effective so when he developed tennis elbow, he applied the patch there too. He was beginning to look like a site for Post-it notes but who was I to criticize? I was beginning to have my own issues.

I was doctoring for a painful heel – plantar fasciitis is the expensive name. I had to strap my foot into a clunky, uncomfortable contraption every night with the hope that stretching would eliminate the pain. This appliance joined my wrist splint for carpal tunnel.

Our medicine cabinet, which once held numerous beauty products, was refilled with Bengay, Tums, Metamucil and Vicks VapoRub, which we all know cures everything.

Because of these new challenges, my nightly ritual had evolved. When I was first married, I scrubbed my face, brushed my teeth, ran a comb though my hair and jumped into bed. Forty years later my nightly ritual goes something like this: I wash my face, and slather on olive oil moisturizer until I glow. To ward off threatening germs, I pop a garlic capsule in my mouth, brush my teeth, and snap in a mouth guard so I don’t grind the teeth down to powder. I Velcro my foot boot into place, tighten my wrist splint, and plop into bed. So much to remember – and it all must be accomplished in a certain order. No wonder older people start getting ready for bed at nine — so they can be in bed by eleven.

One night Honey filled his CPAP (sleep apnea/anti-snoring) machine with distilled water as usual. He adjusted his elbow splint and got into bed. After he was settled, he realized he had forgotten his pain patch. Muttering, he clamored out of bed and rummaged through the overflowing medicine cabinet till he found the patch. He brought it to me and asked for help, which I would have gladly offered except that my flannel PJs had flannel-graphed me to the flannel sheets and I could not move. Really frustrated now, he took off his splint, slapped the back-pain patch on, then re-fastened his splint.

Finally, Honey crawled into bed. He leaned over to kiss me good night. Propping himself up on his good elbow, he sniffed the air. He bent his head in my direction again, and whispered huskily. “You smell so good – just like Olive Garden.”

I burst into giggles.

Just as we were settling down, Honey took off his CPAP mask and wistfully asked, “Didn’t we used to be a hot couple?”

Amid the splints, the olive oil smell, the garlic, the Bengay, patches. and paraphernalia, we lost it. The bed shook with laughter. 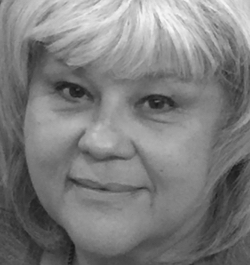 Author’s Comment: “Hot Couple” was born out of the realization that the aging process was getting personal. I entered the 50’s having had few dings so I felt confident I would sail through these middle age  years unscathed. Wrong! While I am thankful none of these physical challenges are serious, it does remind me that as strong  as our bodies are, they were not made to last forever. Repair, Repair, Repair. What is important is to have a sense of humor about growing older and it is helpful to have a support buddy to go through these changes together. Laughter truly does make the journey almost enjoyable.
Patty Anne O’Hara became interested in theatre at the age of nine when she was cast as Cinderella at a summer park program. She has directed twenty-plus plays in the Midwest and Central Wisconsin Children's Theatre. O’Hara has participated in writing and theatre seminars at the Green Lake Writing Conference. She is the author of  "The Chamber Pot" and "The Light of the Cross." O’Hara is a retired military wife, mother and Papa-mom to three grandchildren. She and her Grizzly Adams husband, Michael, live in central Wisconsin along with a fur baby named Tucker.