In 1982 I had four grandchildren: Jeremy the oldest, Sam, Cristen, and Becky who could not read as yet. The three oldest ones and I went to the library to see if there was a children’s book written on hummingbirds. We spent a lot of time researching and looking at all – and I do mean all – the books for kids. It took about two hours.

Why search for a kids’ book on birds? Sam knew why. My grandchildren took turns spending Friday nights with me. We went to water parks and to wild animal parks to feed camels and buffalos and see all the animals. We went to movies, ate out, picnicked, and went to a place called Chain O’Lakes for a day and sometimes for a long week end.

It was Sam’s turn to spend the night. On a Saturday morning in October there was a lot of barking and meowing in my small living-dining room. The cat came in with a hummingbird that was green with a red head. I took it away from him – a lot of chasing and meowing.

Sam went into the garage for a medium-sized ice chest. We put soft material in the bottom and I gently laid the hummingbird upright. Sam closed the top. I went to the kitchen for hummingbird powder to make juice and put it in a container I knew the bird could drink from. Several times in the next few hours I checked on the bird and the third time it flew straight up like a helicopter.

Since I had three cats, I caught it in midair and held it gently. Sam and I petted it on the head and it peeped a soft sound. Sam made sure the bird was staring at him sideways which is how they look at things since birds have peripheral vision. We walked outside, I opened my hand, and the hummingbird flew away. We felt good to have saved it from being eaten by my cat.

After supper Sam and I were sitting in lawn chairs in the back yard watching the hummers drink the red juice I put out and enjoying them buzzing each other. My mimosa tree gave the hummingbirds a place to sit and rest between sips of juice. Sam asked, “Which one is the one we had in the house?”

They were all green with red heads. “I can’t tell one from the other,” I replied.

Just then one of them hummed in place right in front of Sam’s face. He was so excited. It fluttered for about ten seconds and flew off to drink more juice. Sam wanted to know if that was the one. 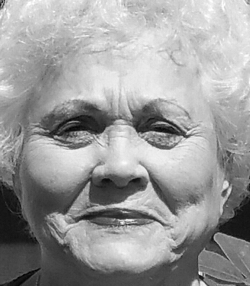 Author’s Comment: My grandchildren gave me an opportunity to play again. I rode bikes and swam with my kids, water skied, camped out. We also had wild birds living in the house with us. Then I had fun with grandkids going to water parks, church and camping out.  This is my only experience with humming birds.
When she is not writing, Connie Bedgood’s time is split between a recreation center playing 42 and cultivating tomatoes, grapefruit, and figs. Bedgood attended Rice University’s “How to Write a Children’s Book” for several weekends. In 2016 she was published in Screamin’ Mamas, Conceit, and Good Old Days. She has also written stories for The Penman Review, Nostalgia, Changing Time, Quail Bell, Section Eight and Indiana Voice online magazines. So far in 2017 her stories will be in The Sacred Cow, Screamin’ Mamas, and The Dead Mule magazines and in 2018 The Stray Branch will have one of her stories as will a magazine in the UK.

1 thought on “The Hummingbird and Sam”