More Than Twelve
by Keltie Zubko 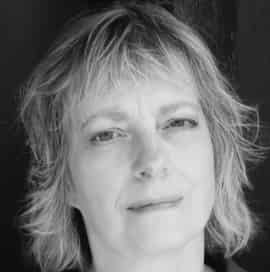 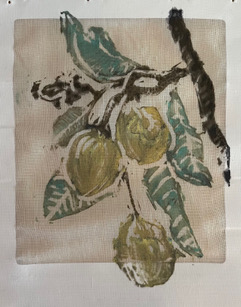 Lino print by Cynthia Yatchman
He held only two things and was dressed up. He’d be in a hurry. She remembered how that was. And here she was with way over the limit of twelve, even give or take a few. There had been no one in the express lineup when she was hit with the impulse to drop her basket of food and flee the store. She’d hesitated near the checkouts, eyeing the exit, when an affable cashier beckoned her over.

She let herself be pulled over even though she knew she had too many small things and a few the cashier would probably have to look up. That would take time. And then, of course, a line formed out of nowhere right behind her, starting with the man and continuing through a line of impatient people, looking at her as if she was breaking all the rules. She just knew it. But by then, she’d already unloaded her basket onto the conveyer belt. It was too late. She was anchored, and worse, hemmed in by the kind cashier and the people she would inconvenience even if she did abandon the useless assortment of her whims and bolt, however gracefully. She focused on her selections traveling on the belt to be scanned: something to comfort, or something to distract, something to shock or placate. Sweet, savory, colourful, textured. Just the choices made her tear up. She didn’t have an appetite.

She kept her back to the man behind her. She did nothing easily anymore, not dress properly for where she was headed, nor decide what she felt like eating, choose her groceries, or even decide where to stand. She just hoped she’d remembered her bank card. Meanwhile, the belt pulled her plums, her exotic cheeses, and all those odd deli items – one of this, one of that – out of her reach, her state of mind revealed for everyone to scrutinize and judge. She flushed and kept her hands at her side, repressing an impulse to check her wallet, trying to have just a bit of confidence to stand in the lineup and pay for her choices.

The man behind her stood blocking the escape. He was joined by another, and then several women and some teenagers, and she felt their contemplation, their urgency, and their silent criticism. They hadn’t heard the cashier invite her there but could see her stream of groceries, her excessive stream, flouting the store’s rules.

She peeked obliquely around at the lineup, especially the man right behind her, a stolid presence, making her feel like a wall was slowly advancing on her. She glanced at his face and was hooked into the intense, searching eyes that gazed back. He held a lush bouquet, and a collection of pastries gleaming up at the world through a windowed box from the store’s artisanal bakery. As soon as she saw them, just like everything else she’d randomly stowed in her basket, she wanted them, too. Or did she? She didn’t know what she wanted, except to get out of there without allowing tears to make tracks down her face, again.

She’d held them off going through the store, not knowing what she should eat, just knowing she wanted to want something definite. She’d careened from one thing to the next, putting things in her basket. It was awkward at the deli counter watching her choices treated so respectfully – apportioned, weighed, and wrapped up – while she already knew her ambivalence might send them into the trash without even a taste. She wished she could run away, leaving them on the counter, unclaimed. That was what had propelled her to the checkout where she’d stumbled into the goodwill of the cashier at the express lineup.

“I’m so sorry,” she said once more, and then to the man behind her, “Don’t mean to delay you. Guess I should learn to count.”

He held his intended purchases straight out in front, like offerings, or perhaps, it occurred to her, like he was warding off strange, disquieting spirits. He was dressed like he was on his way to some occasion, too groomed for the supermarket, and likely in a hurry. She grimaced at him, but he considered her through those calm, appraising eyes, like she was a puzzle he didn’t know if he could solve. She didn’t blame him, and hoped she was dressed decently enough to be shopping there. She had nowhere else to go but back to her desolate home. It had been foolish to come here again, but she hadn’t disgraced herself yet.  And she had selected food this time instead of just prowling the aisles, evading phantoms that stalked and sometimes jumped out at her. She had to congratulate herself, really; it was progress noticing the food instead of memories long past their “best before” date.

“Radicchio,” she answered the cashier. She knew she wouldn’t eat it, though for some reason had craved its bitterness when she saw it. The man behind her shifted his weight, moving carefully. “Ah.” The cashier found it, and continued with the rest. If only they had self-service kiosks, she’d never have to talk to a person again, never explain, never apologize. She wished she could ditch them and walk out of the store, leaving it all behind, the remaining items, the lineup, and the traces of moments now gone forever. She looked back again into the eyes of the man behind her.

He stepped a little closer so she could almost inhale the scent of his flowers and beneath that, the wholesome cleanliness of him, like a new world after rain. He was taller than she was and probably about the same age. But he gave her the feeling of a high garden wall that shut out the chaotic world beyond. That sun-warmed wall would have grapevines growing across it, and heavy, sweet bunches of fruit bursting with flavor, ready to pick. She shook her head, dispelling the sudden fantasy. She hadn’t found anything like that in the produce section to put in her basket, but had grabbed some dark red plums the cashier had to look up, too.

“Nice steak. Perfect for one.” His voice affirmed one of her choices like a comforting hand on her back, steadying her. She was certain everyone in the lineup heard what he said.

She smiled another apologetic smile, “Yes, just me. Sorry to hold you up.”

“They’ll appreciate your offerings,” she replied.

“You think so? I guess I’ll see.” For the first time, he looked as uncertain as she felt.

The cashier interrupted, “There we go. Cash, credit, or debit?”

“Debit.” She fumbled but found her card.

The cashier packed her groceries. For all the trouble they’d caused her, they only filled one bag. She wished she hadn’t bought the steak, knowing she’d file it in the freezer along with others gathered like this. Maybe instead she’d heat up the samosas and douse them with chutney to wake up her taste buds. Or just snack on fruit, as she usually did. It was good at least that she had no appetite for junk food. She eyed the man’s pastries, twinkling in their exquisite box, grateful he made no more comments.

The scent of the flowers wafted over the entire lineup, and she thought she could almost taste them. Freesias. Nothing else in the entire store smelled so appetizing. The lineup shifted forward, urging her to leave, but suddenly she felt reluctant. There was something calming and secure about being there. After all, waiting in the lineup was not really so bad compared to other things that could happen.

She looked at the man again as he placed his purchases on the belt, and he looked back at her like he was offering her one perfect taste of something she had never thought of trying. The lineup was hushed and still as the belt drew his things forward. She put away her card, carefully, and reached for her bag.

“Say, would you be interested in coming along to see the reaction to these?” He gestured toward them as if he were presenting the fragrant blossoms and luscious pastries to her.

She hesitated. She couldn’t even remember what she’d just bought, much less desire any of it. Now maybe she could put off that decision. He shrugged, toning down the brazenness of his invitation.

“It’s just a group of friends, two couples, very informal. I have to make an appearance.” He hesitated, then continued, “They’re always wanting me to bring someone, and you’re a nice person. You apologized, even though you have nothing to apologize for.”

The entire lineup seemed to be listening. She flushed again and her eyes flicked over them, individuals, not a pressing, urging mass after all. Each one offered her something, too: a smile, a nod, a look, a word.

“Jack’ll take care of you.”

One by one they assumed an identity, not friends or confidantes, but benign. They stood in front of the ghosts in the aisles that had gathered, taunting and prodding her to be fast and get out of there.

Tears crowded the corners of her eyes and she blinked, looking away from the man. She couldn’t answer, and as if to go, she turned away. He didn’t see or accept that she had no appetite. Then she turned back, trying to speak and saw the pastries, glimmering up at her, wrapped like opportunities for redemption, ready for her if only she noticed them.

The scent of the flowers hung over her and she wondered with a tiny flare of curiosity whether the man was sweet or savory. The freshness of his skin, clean and spicy, perhaps salty, made her wonder if she wasn’t actually hungry. She could barely answer but nodded and found her voice. “Maybe,” then “Yes. Why not?” She stepped to the side, feeling a wave of contentment from the lineup that held her safe.

He paid for the flowers and pastries, then brought them to meet her. They glittered up at her, colors twinkling, waiting to see if she would have a taste.

Writing “More than Twelve” pulled me through a sad weekend a few years after my husband died suddenly. The story originated from being in the express line at my usual grocery store and remembering it at various times of my own life, the store having opened when I was pregnant with my son. A few years later I navigated it with two rambunctious small children. A decade later, I could barely stand waiting in it, being weak with nausea and fatigue from cancer treatment. It was interesting to think of a whole life, framed in one mundane location. I saw one scene, by wondering about that intriguing man with the flowers and pastries.

Keltie Zubko is a Western Canadian writer, based on Vancouver Island, British Columbia. Her work has appeared in anthologies and literary magazines (digital, print, and audio) in Canada, the U.S., and internationally.
Home | Archive | Issue: Winter 2022
Next: The Marriage of True Minds »

6 Comments on “More Than Twelve”