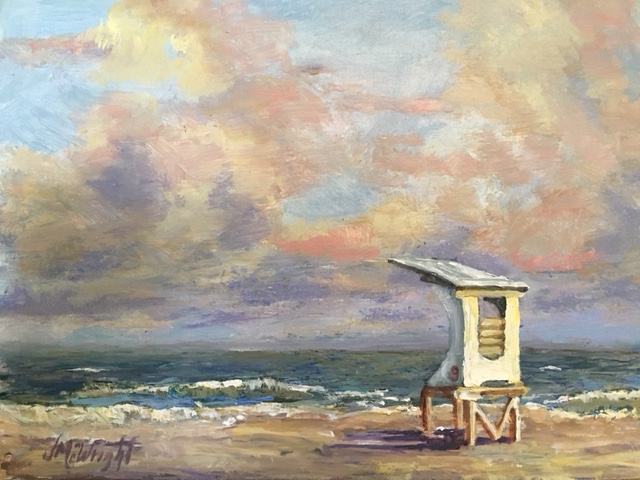 Standing in the garden, alone – why there? Why then?

Looking up, she had a view of the back of the house and the ruined balcony through twiggy branches she knew would be, in August or September, dense with narrow leaves. A distinct green–a better memory than all that happened in that house; she had turned away from what happened there. Now, after the Mediterranean winter, after the howling winds, the branches were bare.

What Mediterranean? Was she dreaming? She had come to this country far from the Mediterranean as a girl, on a ship, to Fremantle. But all that was behind her. She couldn’t remember if she ever thought of herself as an emigrant. What made her think … ah, it was the twigs. Pomegranate branches. The Surprise Tree, someone called it. Or perhaps it was the sound of the waves at the beach. She remembered the beach, not a hundred steps from where she stood. Someone once told her all the girls on the street had salt permanently woven into their hair. Who was that someone? She wished she could remember; she wished it was like the back of her hands, those veins, the rings. No one forgets what their hands look like, why one wears those rings. They were more valuable than their weight, their stones and metals. They needed no retelling of the days they were slipped on. A big day; a white dress, and rings.

On and off, off and on, she had slipped them, off for damaging chores, applying hand cream; then on again. She smiled; changing diapers, washing a thousand loads, hanging them out. Cooking a million meals. Gutting fish. Chopping onions.

Onions, onions. Her hands smelled of them. Her eyes wept for them as she turned away from the scarred chopping board with a wrist to her eyes. She always took off her rings, and then washed her hands before replacing them; easily, habitually, without looking. Year after year after year. Same little ring dish, same windowsill.

Now, raising fingers to nose brought scents of another kind. Of emollients they said would dull the pain; of eucalyptus and menthol. Of peppermint and hemp oil. Healing creams that cost so much and arrived from afar in gorgeous tubes and jars.

Did they really heal? Were they better scents than household smells? Than the wind on the beach after a storm? Oh, those childhood smells: the pungency of crayons, the stink inside schoolbags. The breathtaking caustic fumes from a mop and bucket of water mixed with cleaning fluid. Cooking smells? Tomato sauce. Lingering aromas from dicing fruits for preserving. Fresh but volatile juices of plums, peaches, nectarines. The tempting but fleeting aroma of a good fish-and-potato pie.

She tried to grab a naked branch, too high above her head. No. Elusive. Pomegranates? There were none right now; she knew that. But she remembered. It was fruit that produced smiling cracks on a leathery peel as a presage of winter ahead: forecasters of storms. She could almost see their russet skins, hanging in groups of three or four, dangling from branches weighted by sheer globular volume, sporting little crown-like stamen clusters. Fragile and strong, delicate and resilient all at once–like older women. No one preserved them; it was their nature to turn thick and strong and implacable all on their own.

Implacable –was that what she turned into? A determined woman, one who did not flinch, who stayed the course, who soldiered on regardless? She had to be, after … ah! Did she remember at last?

The derelict balcony on that top story, from where the slice of ocean–their ocean –was perfectly visible, could elicit a few tales of its own, more potent and important than the smell of jam or chutney. More powerful than chopped chillies. Yes; far from the kitchen, far from the family hubbub and traffic tumult from the street, it was a haven. Where they went for peace, for silence.

It was coming back. She could turn towards it, the bustling, blistering, bubbling story of her days.

They liked to tell her that the bad memories came back first–the drama, the trauma. But here, here she could look up and clear her mind of all the nurses said, the doctors, the grandchildren–including the ones who drove her to appointments; twins? They were always together. She smiled; could not tell Julie from Tamara. They liked to warn her of nightmares, of flare-ups, and visions of fights, like films, like bad movies with the sound up too high.

But here she looked up at a balcony, a twisted mass of metal struts. The timber was all gone now. Nails and screws, rusted and twisted, eaten to brown powdery worms by the sea air, protruded from the wall–a bristling of uselessness. What was it all good for now?

She closed her eyes, and for balance put a hand on the textured pomegranate trunk. She remembered that feeling of bark under her hand. Remembered hide-and-seek, her daughter shouting with the neighbors’ kids, tying the smallest ones to trees to copy scenes in movies. Remembered them tracking gray beach sand into every corner. Remembered them climbing the orange tree for twists of blossom to take inside.

Like she had, with her sister. Oh, ages ago. Another era, another country. Twists of blossom, held out. “We’ll never have oranges now,” Mama would say; but they always had too many, taking a dozen or so in a net to school to cut into quarters. Netball was never the same without their oranges in the breaks. Sinking teeth in, and getting that first sharp shiver. 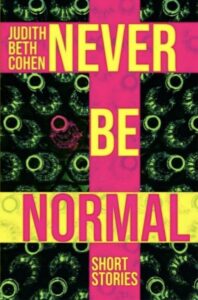 Eyes closed, sunlight spangling colors underneath eyelids, and a balcony magically restored to its usefulness, railing straight, timbers sawn and stained the color of new mahogany. Hah – what delusions they had of finery and splendor, spreading out wide gathered skirts and sitting on those balcony timbers in the sun, with seagulls wheeling overhead, with a stack of magazines between them. With Colette? No, you silly forgetful thing. Colette’s your daughter. Of course–long before Colette came.

It must have been Greta. Ah, Greta, youngest sister, who went first, zapped out of a full life by throat cancer. But what a laugh she had, until the end, what a braying chortle. What humor. There’s something to be said for going early, she supposed; Greta never nursed that fear of forgetting, forgetting anything, forgetting everything. She left them, and her muddled life, sharp as a tack.

What was she doing there, why did they bring her here? Holding onto the pomegranate tree, peering up at the house, thinking of Greta on that balcony in her wedding dress. And many months later, taking that dress up so she could wear it down the aisle herself, to marry Harvey.

Why on earth she married Harvey was a mystery to the family. He wasn’t European. He didn’t have dark hair! He didn’t understand their love of the sea; of its noise, its constant presence. They never understood, never knew she was blindly, irretrievably in love with Aldo. And she could never have Aldo.

See? The names were coming now. Tumbling into her mind like pomegranate arils heaped into a child’s hand. Like clouds hanging over a watery horizon.

Ah, Aldo–what wasted emotion that was. Three, possibly four, years of mooning and sighing and hiding terrible longing inside a tear-stained hankie scrunched to a hard knob. He hardly knew she was there, turning away, chasing after Greta and getting her, embracing her, in a sweetheart neckline wedding dress she envied, wanted, coveted.

How the years flew.

“May I have your dress?”

But she used it, something borrowed, and years later watched Aldo drink himself almost to death, ruining Greta’s life. Still, nothing, no one, could cramp Greta’s humor, could they? She laughed through it all.

Even laughed at her and Harvey, second-choice Harvey, when they took over the house and he made it look like new. Watched him turn into an attentive, sentimental, selfless husband.

“Fell on your feet, Michelle, you did.” Her own loud words startled her. Talking to herself, using her name like others in the nursing home did, too often, too loudly. What did they think, that she’d forget her own name?

That’s what Aldo had called her one Christmas, with all the family gathered on his big boat, on the jetty, along the ramp; when he finally noticed her, too late, in her yellow sundress. And made a pass. The nerve. The hide on that man, and Greta pregnant. She turned away. No words were needed; he was not even worth a syllable. And she never said a word to anyone. No one. To think she had swooned over such a man.

She sometimes couldn’t think what day it was, or where she’d left the scissors … but she could never forget Colette, darling dream of a daughter. A miracle, born too early, surviving on constant care. How she held her breath. How she prayed. Watched over her, cared for her like the treasure she was, pulling through and astonishing them from then on. A child of the waves, of the sea, of the beautiful sunsets that gilded her hair. She amazed them. Because, with a father like Harvey, how could she go wrong?

A call from the garden door.

Ah, ah–it might be time to go. Go where?

A balcony once more decrepit. A house, crumbling, full of the past. She had to turn back.

“Come along, Mama. We’d better get out before the demolition men come round. This place will be flattened soon.”

“Flattened. Bowled over. They can’t demolish the sound of the waves. That will always be here, won’t it? Let them bowl it over.”

“Yes, but I thought you’d love a last look.”

A lot of last looks, these days. Everything was changing. She’d had a last look at Harvey, dear Harvey, faithful honest Harvey. Hardworking Harvey, who perhaps guessed he was second-best, but never minded. How many years ago had he died? She could not remember. Colette would know. Gave Colette her arm. Last look at the old garden. “That pomegranate tree has a tape around it.”

“I forget what you said they’re going to build, Colette.”

“I forget everything.” She felt her daughter take her arm, firmly, carefully, watching her feet.

“No, you don’t, Mama. You tell us beautiful stories that make us laugh.”

And move her to tears, as well.

A daughter’s sweetness. “And anyway – remember what Dad always said?”

Colette patted her mother’s arm. “You do, you do. He said we don’t need to remember anything to be joyful. Joy needs no memories. Happiness has no memory, except of itself.”

They turned away together, walking slowly to the car.

“You definitely remember the feeling of joy, Mama.” 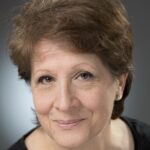 Rosanne Dingli has authored ten novels, four novellas, several volumes of published and awarded stories, and her collected poems. She has held a number of positions in publishing, and has lectured on creative writing. Rosanne's short works have appeared in well over 90 magazines, anthologies, journals, and supplements since 1985. She is current newsletter editor at Rockingham Writers Centre. She lives in Western Australia. Go to ArtsMart to purchase her most recent novel. 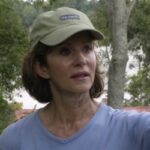 Jenny McKinnon Wright is "intrigued by light as it affects nature in a particular moment. To paint that emotion and share it with the viewer is my goal. Working en plein air allows her to capture the feeling that only painting on location can offer. Both a studio and plein air painter, Wright first realized her artistic love at her watercolor artist Aunt Sarah's side. She then earned an art degree from ECU, followed by MA graduate work at GA State University, while teaching night school art. Her work hangs in public places and many private collections. She is represented by Sunset River Marketplace, Water+Color Gallery, The Verrazano Gallery, and the Cameron Art Museum Shop. Please visit her website: artofJMW.com