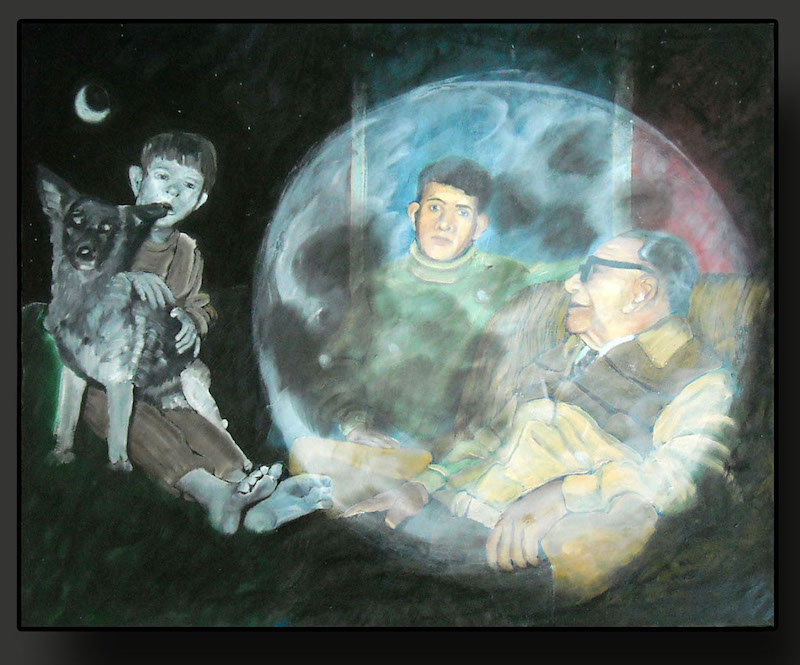 Looking Through the Moon, oil painting on wood panel, by Betsy Jaeger

My father used to call the obits “the funny pages,” which I now understand was his desperate way of denying mortality. Even when presented with daily information to the contrary, he never failed to express shock.

“Look at this,” he’d say to us at breakfast time, peering over the ragged edge of the newspaper, “Here’s a guy, dead at the age of 63.”

“That’s so young,” my mother would agree, shaking her head.

I was seven years old at the time. I never gave longevity another thought until I was 15, when I began to fixate on the year 2000. Would I live long enough to crack the century ceiling? I did the math; I would be 63. My parents were right – 63 is way too young to die. Clearly, children should not be allowed to define old age. Nor should teenagers who think they’re immortal. It is not considered good manners to want to live forever; nevertheless, people do.

Even when I was middle-aged, I didn’t give much thought to longevity. Now that I’m certifiably old, verging on “old-old,” and in spite of ample evidence to the contrary, I like to believe that old age goes on forever.

Of course, I know better. Knowing is a whole different story. I can’t help but pay attention for a sobering minute or two when the indignities of old age intrude, but then I take refuge in denial, and I stay there until the next time my back goes out.

Old age follows us everywhere we go. “Date of birth?” the doctor’s receptionist asks at the start of every office or hospital visit, followed promptly by “Any falls in the last six months?” Every fistful of pills we swallow, every Google search we make in pursuit of disease we might have or side effects we might be experiencing, all speak of life’s fleeting nature. Staying in denial takes a heroic effort.

Assaults on your person don’t only take place in your body. The outside world throws them at you like darts. I recently received a notice from the Department of Motor Vehicles, reminding me that six years had passed and it was time to renew my license.

The message read as follows: “Because you are 65 or older, you may elect to renew for two years, at the cost of twenty-four dollars, or for six years for seventy-two dollars. I immediately went into denial. What did this notice have to do with me? (“Denial” and “stupidity” are almost synonyms, but I try not to think about that either.)

When I could stall no longer – my current license was about to expire – I drove to the DMV. I carried with me, as requested, a two-page form and my old license, with a photo of me that, like the portrait of Dorian Gray, had grown more and more flattering over the past six years.

I parked my car, entered the building, and was given a number – 105 – which meant that I would have more than enough time to put on my make-up and fix my hair. The DMV is a vehicular purgatory.

When at last my number was called, I made my way toward a woman in a glass booth and produced the form and my laminated plastic license for her inspection.

Next it was time for my close-up. I arranged my face by widening my eyes and sucking in my cheeks, which reduced the severity of the lines that run from the sides of my nose to the sides of my mouth. The resulting image looked like a skull, with hair.

Then came the moment of truth. “I see,” she said, “that you forgot to fill out the line that asks you to choose between a renewal for two years or six.” She slipped the form toward me and handed me a pen. It took me a moment, but since “forever” wasn’t an option, I bet on the six-year, seventy-two-dollar option. Had I thereby assured myself of six more years of life? And what if I expire before my license does?

That thought put me in mind of my late Uncle Milton who took a passionate interest in his life expectancy when he turned 70 and received a letter from the Internal Revenue Service, notifying him that he was obliged by law to begin to withdraw money from his pension plan.

Uncle Milton did not at first appreciate the deeper implications of being in possession of such information. He just thought it was good tax planning – that is, until he opened the envelope and learned that he had 18.58 years left to live.

The instant Milton read the news he was suffused with a profound sense of relief and wellbeing. He had not realized just how much the “big countdown” had been preoccupying him. The moment he learned his dying day, the awful burden lifted. The identical news, received from some less fly-by-night Federal agency, like the Environmental Protection Agency or the Transportation Department, might not have carried the same authority. But there it was in writing from the I.R.S.

There are people who would just as soon not know that kind of information, even if it comes from a reliable source. Not Milton. He welcomed the information more as a matter of timing than mortality. Not only could he now buy green bananas and freely subscribe to season tickets; he gave his dentist the go-ahead on an implant instead of a crown.

The actuarial table from the IRS indicated that the 18.58 figure represented his life expectancy as a married man, using the joint and survivor annuity approach. Should he suddenly find himself not married for any reason, his life expectancy would plummet instantly, and presumably without notification, to 13.67 years. (My Aunt Lily reports that Milton, always a thoughtful husband, has recently been even more solicitous.)

Certainly Milton seems to be blooming in the very shadow of his own definitive mortality. He hauls out his fateful day at every opportunity. When people mention dates for the next Olympics, or national election, Milton joins in with a chirpy, “I’ll still be alive then.” When the projected date clearly lies beyond his dying day, such as his grandchild’s college graduation, he interrupts the conversation with equal good cheer to offer his regrets. Owing to what he calls “a prior engagement,” he would not be able to attend.

But the greatest benefits may be spiritual. Knowing his dying day has given Milton the ultimate peace of mind. Now, when he wakes up in the morning with a scratchy throat, he doesn’t panic. He knows this isn’t the “Big It.” It can’t be. He’s got nearly 18.58 years left. Stress and anxiety have virtually disappeared from his life. Knowing his “check out time” seems to have given Milton what life had heretofore failed to provide – an unshakable confidence in the future, and a real sense of purpose. He has the blood pressure of a youngster.

Occasionally, though, when he’s tinkering with the guest list for the funeral, or reworking the eulogy, it occurs to him that he might just make it past his 18.58 deadline, that simply knowing his expiration date may have added years to his life. 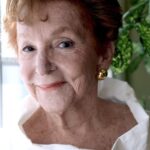 Mary-Lou Weisman started her nonfiction writing career as a journalist for a local newspaper, then as an essayist and feature writer for The New York Times, The Atlantic, and other national magazines. She has taught memoir and personal essay writing as an adjunct professor at The New School and currently at her local library. Ultimately she abandoned magazine writing in favor of writing books. She thinks of herself primarily as a satirist, although two of her five published books are as serious as she knows how to be. Mary-Lou is joining Persimmon Tree for one year as our Guest Columnist. Go to ArtsMart to purchase her books. 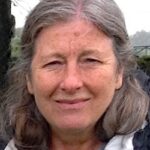